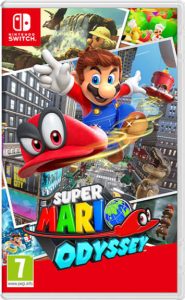 While I am a massive Nintendo fan, my history with the mainline Mario games has been rather mixed, often dropping them halfway through and never finishing them. While this is partly me being bad at platforming games, I’ve simply just preferred the portly plumber’s spin-off outings in Mario Kart and the like to the main series.

On paper, Super Mario Odyssey should sound like perfection for me, with its less punishing difficulty, large open worlds to explore and fully taking on board the Switch’s ‘jump-in, jump-out’ design philosophy. While I think this game achieves some of the finest gameplay in the series, there’s something lacking that made some of Mario’s other adventures so enjoyable to play. From my point of view this comes from three principal weaknesses: the overall story, progression, and a strange difficulty curve. 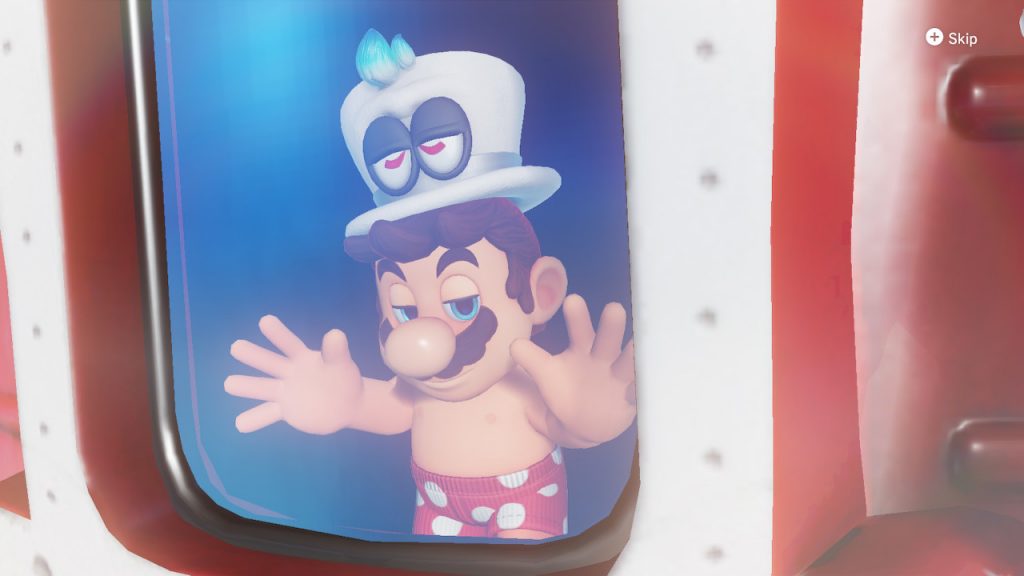 The story of course is very typical Mario. Bowser has kidnapped Peach once again so he can go off and marry her against her will, but this time he’s also been causing mayhem across the world by stealing priceless artefacts from several kingdoms to use in the wedding. We join the story in the Cap Kingdom, where he seemingly sees off Mario for good, abducts one of the kingdom’s residents (ghostly hat creatures that can transform into different items of headwear) to use as Peach’s tiara; then sets off on a journey to the moon for the actual ceremony. Coming to, Mario finds himself alone in the Cap Kingdom apart from a top-hatted resident called Cappy. With Cappy’s sister now in the clutches of Bowser, the two team up for an adventure across the globe as they fix Bowser’s mess and try to rescue the two abducted maidens.

Let’s be honest, Mario games have never had a real flair for story (outside of the brilliant Mario & Luigi RPGs), but I’ve become increasingly bored by the ‘Peach has been captured by Bowser’ thing. While it serves its purpose of giving you an end goal, there’s a distinct lack of imagination and creativity when you say the same things as you were saying 30 years ago. And indeed, it seemed that Mario games were moving away from this – 3D World had the fairy sprites, for example – but here we are again. 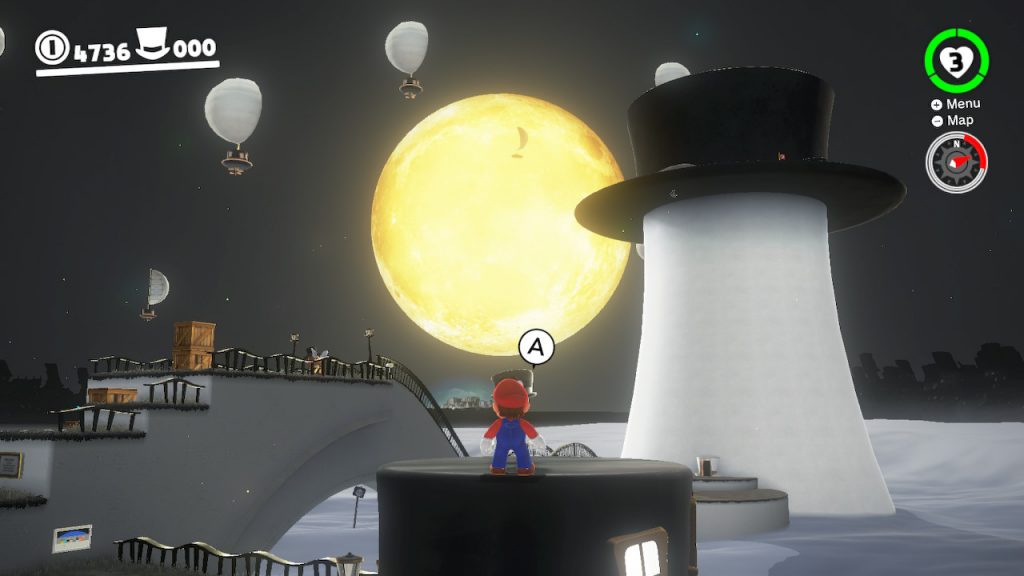 That said, Odyssey does do something different in its world building, as each kingdom (this game’s word for different worlds/environments) has its own story to tell. Whether that’s uncovering the mystery of Tostarena’s frozen desert, or scouting out musicians in New Donk City for the festival (the most ingenious set piece of the entire game); each kingdom just has its own uniqueness and feels rich in culture. Some of these are better constructed than others however, and I was disappointed at some being so small while having great concepts behind them. This goes on to impact the game’s pacing and progression, which isn’t great to start with.

Your main objective in each kingdom is to find Power Moons to power up your mushroom-shaped airship, the Odyssey, so that it has enough energy to chase Bowser and his minions to the next kingdom. Power Moons work in a similar way to stars in previous Mario games, with the exception that there’s a lot more of them (880 compared to the usual 120). A lot of what you need for the main story can be obtained by completing the main objectives, which are presented in a linear fashion – as soon as you enter a new kingdom the game will give you a direction to go in, then another, before leading you to a boss fight with either a newly designed Mario enemy or one of Bowser’s minions for this game, the evil bunnies known as the Broodals. 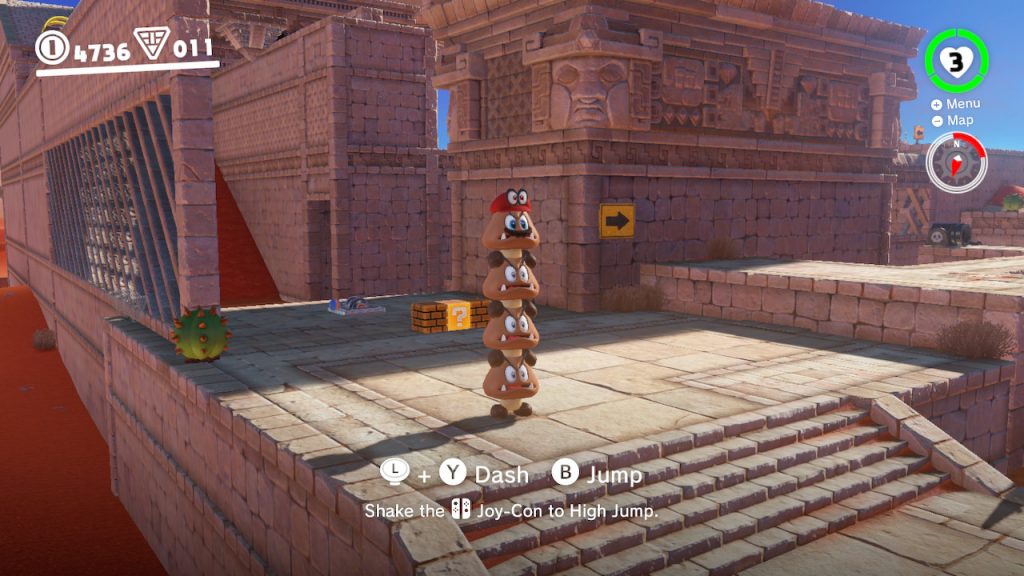 The enemy design in the game is great and it relies less on the classics and takes to introducing new variations instead. While this means that some have glaring omissions, like Boos, it’s clear that enemy choice and design has been based on the game’s core mechanics. This is true for bosses as well, with many of them having very interesting ways of taking them down. I do however wish the Broodals were more fleshed out as they have interesting designs, but are utilised in the same way as the Koopa kids in other Mario games. They also fall into the trap of having to fight them more than once, as once you know the strategy to beat them, they become frustratingly easy rather than a genuine challenge.

If you’re just following the main story, you’ll find yourself progressing through the game very quickly. Indeed, the game’s most advertised world, New Donk City, comes in at the halfway point when it feels like the game is just hitting its stride. This isn’t due to lack of content or anything, but is a problem with the story’s linear progression in what is an open-area sandbox exploration game. You see, the real enjoyment of this game is exploring each kingdom at your own pace. While this is possible to do throughout the game, there’s certain content locked until after you finish the main story, so you might as well get that out of the way first – and once you do Super Mario Odyssey becomes an objectively better game. Gone are the annoying hand-holding objectives and you can simply explore the world as you wish, collecting even more Power Moons and tackling the tougher challenges that the game has to offer. 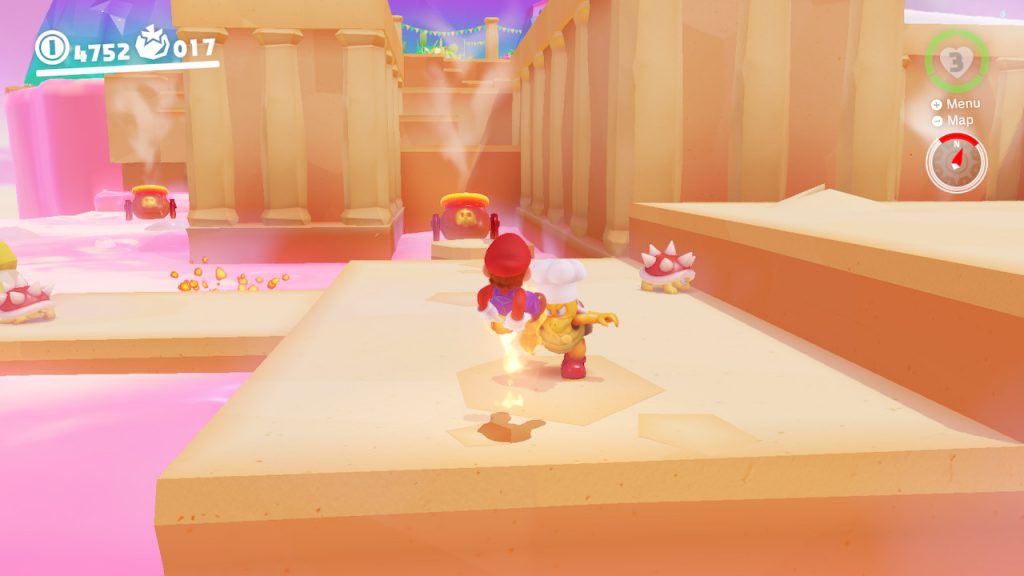 You can tackle some of these tougher challenges as you go, but it means that you’re developing skills faster than the game expects and mastering Mario’s updated move set. While some of these take time, it’s clear that mechanically Mario has never played better. His standard jumps and flips can be pulled off with ease, the new ground roll makes it easy to get from point to point really quickly, and just the way Mario interacts with the environment, like how he runs faster going downhill, feels oh-so satisfying. The real big addition though is Cappy, who not only allows you to take control of different creatures and objects but extends Mario’s range and reach further than we’ve ever seen it before. Large gap in your way? With Cappy, that’s no problem – just hold him out with a hold of the Y button, jump on top, and you’ll be across in no time. You can also now do a dive forward in mid-air, although I found that, and chaining certain moves to move Mario more acrobatically rather difficult. This is required for certain Power Moons, which may lock people out of completing the game if they haven’t got superb coordination.

If you can master these moves however, the later kingdoms can become a walk in the park. Again, I’ll be clear that this is just until you finished the main story – the post-game content thankfully takes it up a notch and does have some particularly punishing levels.  It’s just that the structure they have put in place doesn’t work for the type of game Super Mario Odyssey is.

On screen, Super Mario Odyssey looks great with eye-popping cartoon visuals and an incredible level of detail. This is the first full HD 3D Mario game (well, I guess Super Mario 3D World kind of counts, but that offers a more restrictive isometric camera), and there’s been a tremendous amount of work put in to get this game looking just right. Character animations are a particular strong point as the characters and enemies on screen never stop moving, helping to create a world that feels very much alive. Just look at Mario for instance: he’ll visibly sweat and fan his face when in a hot place, or shiver and breathe out mist in a cold one. The new photo mode is great for capturing moments like this, and I’ve had quite a few funny moments trying to capture the stupidest screenshots of Mario jumping on people’s’ heads.

For the best experience you’ll want to be running the game docked, but it works perfectly fine in handheld mode as long as you don’t mind the drop in graphical quality. This is pretty noticeable as lighting and shadows look significantly worse, and it’s easier to see the jaggedness of the lack of anti-aliasing. You’ll also have to deal with the removal of motion controls in handheld mode, although despite the game trying to force you to use them (on every boot up it shows you a screen asking you to use the Joy-Cons) it’s perfectly possible to perform 99% of Mario’s moves without them. 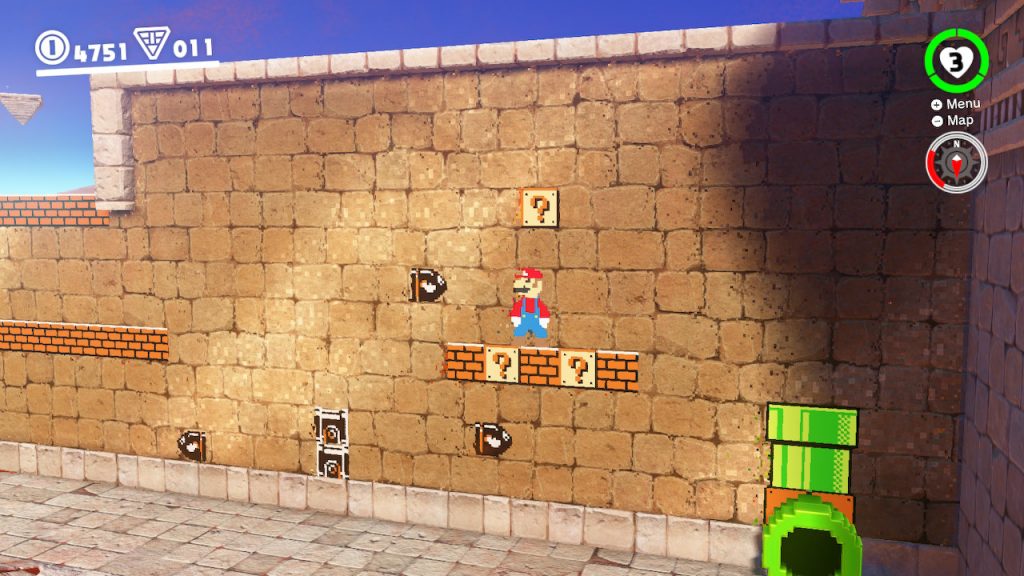 It’s an amazing game to listen to as well, and while my personal preference is the more orchestral sound of the Galaxy games, that doesn’t stop Odyssey revelling in the now-trademark big-band feel and going all out with some foot-stomping good tunes. “Jump Up, Super Star!” is of course the one that stands out and I must say it does get me a little emotional as it really stands up for the Mario franchise as a whole; but it doesn’t stop there: every world has its own unique theme that really embodies both the game and series tradition. What’s more, after beating the game you can listen to the soundtrack within the game and change up what you listen to while you play.

Super Mario Odyssey is not a revolution but an evolution, taking the core aspects of the 3D games and refining them to their best, and it’s easy to pick out aspects from Super Mario 64, Super Mario Sunshine and Super Mario Galaxy and feel that they’ve took this idea, thought about it and made it better. It looks great, sounds great, plays great and is an excellent fit for the Switch, but it still isn’t perfect. Trying to find a way of creating a compelling story with progression that is more balanced between focusing on newcomers and old hands is a must for a follow-up. That aside, this is one of the most fun Mario games I’ve played since Galaxy and one I can fully recommend.