As a long-time Zelda player, The Legend of Zelda: A Link Between Worlds is a bit of a strange entry in the franchise – not because it is different, but because it is so heavily built around A Link to the Past despite having a cool new mechanic and a free-flowing structure that really opens up the world around you.

Set as a sequel-of-sorts to its 1992 predecessor (even being called Triforce of the Gods 2 in Japan, after its original Japanese title), The Legend of Zelda: A Link Between Worlds feels more like a modern remaster of the SNES classic than a whole new game. While it tells a new story; the world, dungeons, enemies and characters have largely not been changed; which isn’t what you would initially expect when most entries usually have new, creative bosses and enemies and different dungeon designs. For this game not do that seems strange to me and I can’t help but think that basing the game so largely on A Link to the Past has stifled the game’s creativity somewhat.

I say this decision is strange because when it comes to the gameplay there’s plenty of things to create a fresh experience, all the while giving us that tight, classic top-down Zelda gameplay that we all know and love. 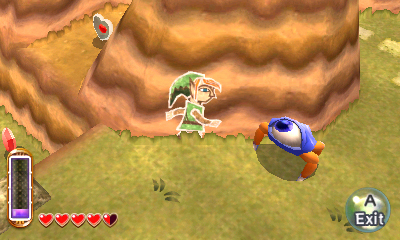 The main new mechanic here is Link’s ability to turn into a painting, allowing you to merge into and traverse along walls. Primarily this is used for accessing new areas, solving puzzles, and for travelling between the light world of Hyrule and its dark world parallel of Lorule. However, it also opens up new avenues for combat as you can now sneak around enemies you don’t want to encounter or attack them from a different angle. My favourite example of this is when you are trying to get around the pesky Beamos statues, so you can now completely avoid their laser beams by merging into a wall and walking safely past them. It’s a mechanic that’s obviously well thought out and integrated within the game, as you combine it with weapons like the Sand Rod to hop between platforms, or use conveniently placed portals to hop between the light world and dark world to discover a hidden area.

I actually think this mechanic could have been integrated into the game even more than it has been as it just has so much potential. Those combat situations are definitely an area where it is underused, and I would have liked to see more use of it in boss fights, or even the enemy turning the ability against you. 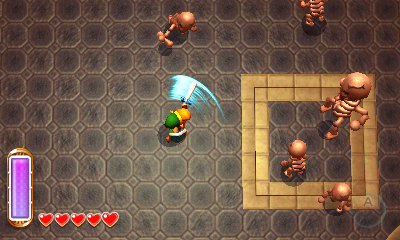 The other major new feature ties to the game’s progression and your inventory, as A Link Between Worlds does away with the traditional pattern of visiting a dungeon, getting an item, then moving onto the next dungeon. Instead, weapons can be rented or purchased at any time (given you have enough rupees), and apart from specific points in the game that are tied to the story, the game’s dungeons can be defeated in any order. This means that the game world is a lot more open to you, and while there are some pieces of equipment that you still need to find in the dungeons, they don’t stop you progressing like the old system did.

What we have gained in freedom we have lost in difficulty however, as having all dungeons at the same level means that there’s no increase in difficulty between each one. Some may have some more powerful monsters that can kill you quickly if you don’t have many hearts, but honestly, if you have the right equipment at the right time the game is a breeze to get through. Finishing the game once unlocks Hero Mode which ups the challenge a bit, but it would have been better to have it available from the get-go to enable more experienced players to have a greater challenge. 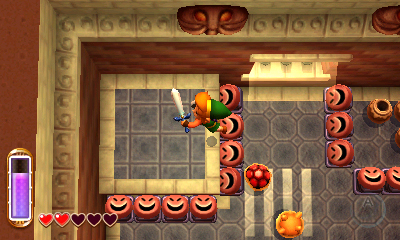 The item rental system I have mixed feelings on, as although it gives you quick access to an item, if you die you will lose it and are forced to rent it again. Granted I only died twice in the early stages of the game, but it’s very unwieldy having to go back to the shop, rent the item again, then go back to where you were. It feels like it’s artificially introducing difficulty and isn’t very effective at what it’s actually trying to do in allowing you to get through the game faster. Instead of renting items I ended up buying each item outright when I actually needed it, rather than renting them all for cheaper; just in case I needed them.

If you want to fully complete the game, you’ll have to buy the items outright anyway in order to upgrade them into more powerful versions. You could do this in previous Zelda games with rupees, but here it feels more like a reward as you have to find and collect 100 lost baby Maimais (little octopus-like creatures with snail shells on their heads) and deliver them to their mother.

The map on the touch screen becomes really useful for this side quest as it tracks with a counter how many lost baby Maimais are left in each part of the overworld. This makes hunting down the critters a lot easier, especially when you only have a few left. It would have been nice to have this feature for pieces of heart too, as it’s always a pain to track down the last one or two you need unless you’re using a guide. The map also has a nifty fast travel feature, which allows you to jump to any of the save point bird statues that you’ve previously visited. The world itself is pretty small so it doesn’t take too long to get anywhere, but it does cut a lot of time when you want to hop between different places on the overworld.

The touch screen also houses the inventory system, and it is maybe the best I’ve seen in any of the Zelda games that use a touch screen, as it’s easy to organise and use and it gives you the option of setting a certain number of rows on the item grid to a fast select switcher, allowing you to swap through items you use often on the fly, which can be really useful when you’re in the middle of a boss fight.

Lack of difficulty aside then, the game just feels great to play. Link is very easy to control, always responding to your actions and generally being in the right place at the right time; although I did feel that some enemy hit-boxes were a bit too big and tricky to get an opening on without taking damage. 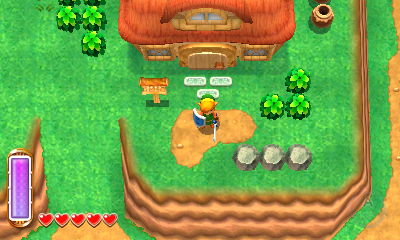 The game also looks great on screen, with everything being rendered in 3D despite the top-down camera. I know they had to use some trickery to get the game looking like A Link to the Past and I must say it really works in terms of keeping that same visual style. While I still think the Wind Waker/Four Swords Adventures look was the most expressive, this new look definitely has its charms, particularly with character models and environments.

The soundtrack offers a new take on many tracks that originated from A Link to the Past, but it’s the new compositions, by Ryo Nagamatsu, that really stand out – Yuga’s theme is genuinely creepy and has similar tones to Ghirahim’s theme from Skyward Sword, while the Lorule Castle theme is an instantly recognisable tune and is one of the tracks most frequently associated with the game.

There’s also a cool Easter egg that you can find in Kakariko Village’s milk bar – the musicians in there play a selection of tunes from a variety of Zelda games, including Ocarina of Time and Skyward Sword. While they do tend to play down the timeline these days, it’s still nice to see the connections between the games being acknowledged.

While it has great gameplay, visuals and audio, I definitely found the story to be a weak point up until the very end of the game. While following the same structure and plot points of A Link to the Past don’t help, I think this is mainly because it doesn’t explain its plot very well. As we play the game from Link’s perspective, we miss out on a lot of the background context on what’s really going on until a big exposition dump at the end of the game. And it’s what is introduced at this point that really made me like the game, as I finally understood different character motivations and everything slotted neatly into place. All of the main characters have different intentions from what you first thought and I really liked how it made the twist. So instead of building things up as it goes along, it’s more about the final destination. 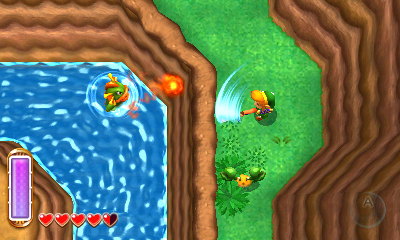 As an overall package, The Legend of Zelda: A Link Between Worlds is a great Zelda game and a textbook example of the classic top-down style. For new players it offers an excellent opportunity to get into the series, particularly with its more modern, free-flowing structure and easy difficulty. These allowances however are made at the expense of existing fans who are left with a simplistic re-tread of A Link to the Past; one which stifles the game’s creativity and use new features, and gates away its most interesting story points until the very end.