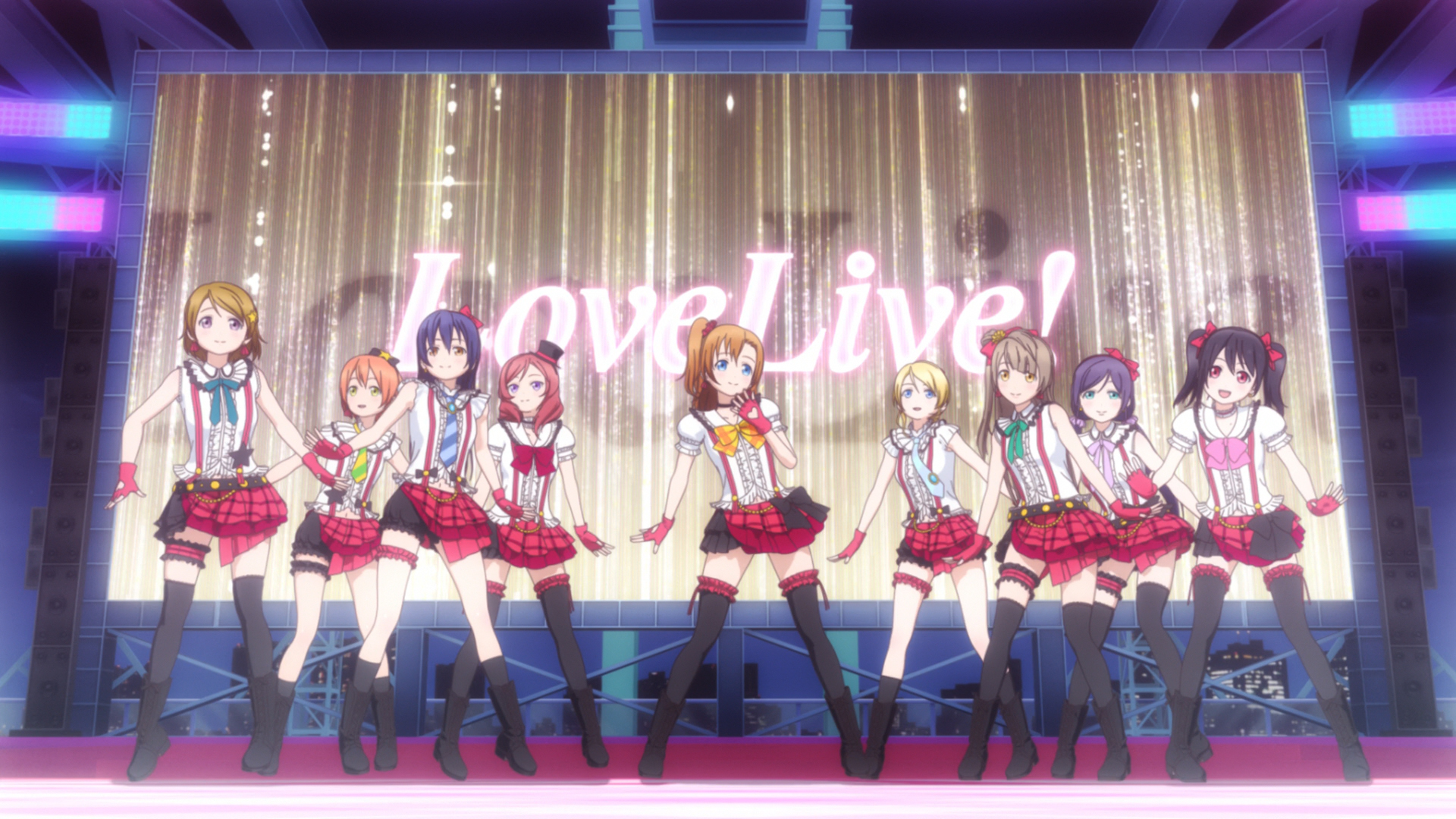 While dwindling student numbers and threats of closure may be more common in more rural areas, the bustling city of Tokyo is not immune to the country’s ageing population. When Honoka Kosaka, second year student at Otonokizaka High School, learns that the school is to stop taking on new students from next year and ultimately close when all of its current students have graduated, she becomes determined to find a way to keep the school open. After discovering that other schools are using school idols to attract potential new students, Honoka thinks she’s found the answer. She might be able to drag her two best friends, Umi and Kotori, into forming an idol group with her; but with student council president Eli Ayase fighting against her at every turn and their debut concert falling flat on its face, it seems an impossible task. Can Honoka save the school from closure and win the hearts of prospective students with the power of idols? 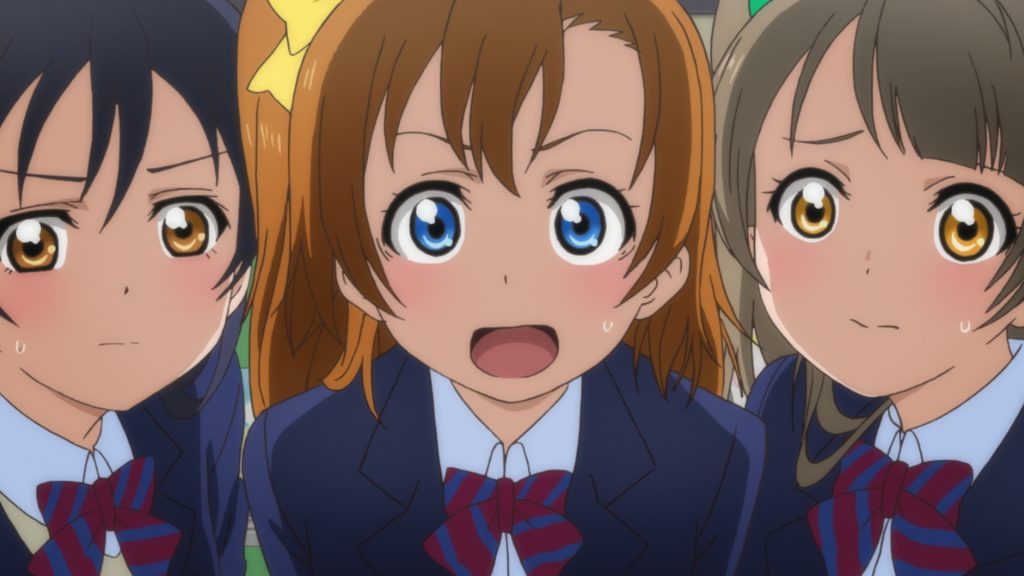 Love LIve! School Idol Project’s first season, produced by Sunrise and directed by Takahiko Kyougoku, is a fun and charming anime series that gets across a core message that even if your dreams don’t come true, you’ve still learned and developed into something better. While it is an idol anime, it strikes an interesting in-between in the genre, setting itself out against the happier, nothing-can-go-wrong type of shows for younger audiences, and the heavier, melodramatic shows for older audiences; bridging the gap with strong vibes of musical theatre and peppy character drama.

The first episode gives an instantly strong impression as it is so lively and animated. The first ten to fifteen minutes are a pure whirlwind as it establishes the three main characters and the central plot of the girls’ school facing closure. Honoka, while fitting the cheerful airhead trope, is actually a perfect lead for the way the show is presented, as her hyperactive personality drags you swiftly between each point that the show has to establish and ensures it doesn’t get bogged down with meaty exposition. I quite often take to the lead characters in idol shows and Honoka is no exception – her can-do attitude is frankly inspiring and her liveliness makes her really fun to watch as she jumps around on-screen. The show’s nine main characters are one of the main draws here, with many getting typical character types from the tsundere to the shy one, and while it would have been easy to stick to those tropes, they each grow in different directions over the course of the series. For example, it allows Hanayo to overcome her shyness and become the idol that she has always wanted to be; while the cold and unapproachable Eli gets to open up and unburden herself from the weight of her childhood talents. 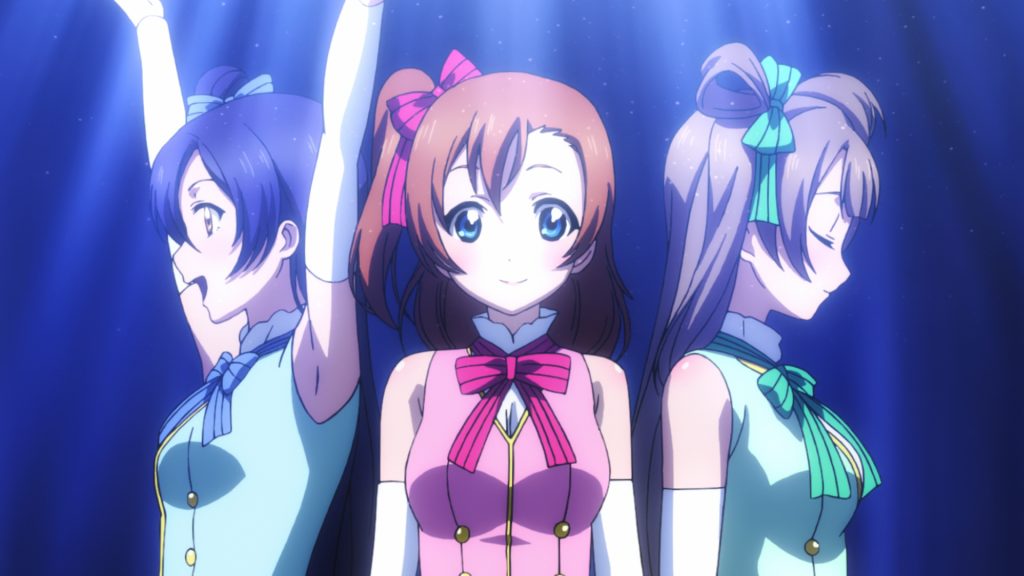 While the entire first season is about the formation of the idol group μ’s, it is largely contained within the first seven episodes, as Honoka has to gather the nine members together, resolving some of their hang-ups along the way. It is of course a foregone conclusion that they will end up together (eagle-eyed viewers will notice that each member of the group appears in some fashion in the first episode), but it is more about the journey and discovering what makes each of these characters tick along the way that makes it entertaining. The series does however focus on some characters more than others, and it’s not always clear why a certain character actually wants to be a part of μ’s. With Hanayo, Nico, Eli; and in part Maki, you’ve got clear motivations in why they’d join, and we get specific episodes on these cases, but the rest of the group either just tags along with them or joins on a whim. This is particularly the case with Rin, who joins just because Hanayo does and she doesn’t seem to have much going for her other than being very athletic.

Some more time could have been used to help flesh out the characters more then, but it may have ended up hurting the smooth pacing and plot progression. There is one slight dip in the middle with a token beach/training camp episode, but overall it’s a series that flows well from beginning to end, showing μ’s becoming ever more popular as the members fall into place and they begin producing some of their hit songs. One thing I will say is that it is sometimes hard to relate to how they become so popular so quickly, as you mostly see their rise through an online leader board. So, when they suddenly have adoring fans that are turning up to their live performances at school events, it can make you think “where in the world did all these come from?”

While the first half of the series is primarily focused on saving the school from closure, the second half becomes more focused on telling Honoka’s story as she develops from an ordinary student into a true leader. As the group decide to push forward to enter the Love Live school idol competition, Honoka tries a bit too hard; falling ill and putting the fate of the entire group in jeopardy, as members start to drift away and Kotori begins to be tempted away by the promise of studying fashion design overseas.

A potential breakup is a common theme to use in idol shows, with most going in hard on the melodrama with lots of fighting and crying between the girls; but here it feels refreshingly light and presents the situation in quite a realistic manner as the girls drift away from the group gradually without Honoka being there. It really puts a lot of effort into showing that she’s really the glue that keeps the group together, and even if nobody will admit it, she is their de facto leader. 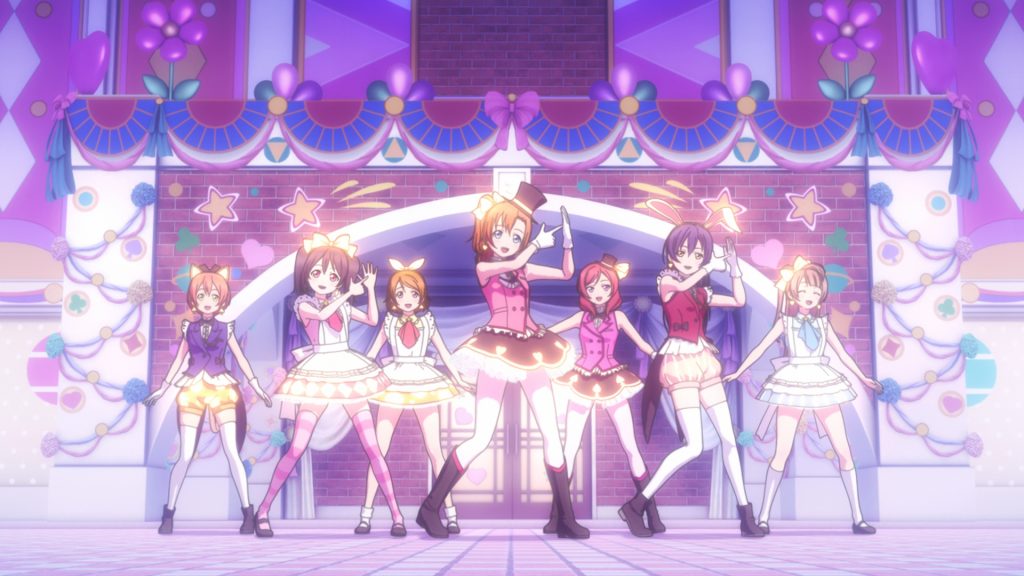 The series’ animation is handled by Sunrise, who produce a very good-looking show, using a bright colour palette and soft, round lines for the characters to build that “cute girls doing cute things” look and feel that has been so successful for anime in general in recent years. There’s incredibly strong attention to detail with the setting; with the series taking place in Tokyo, it’s really nice to see that certain places have been faithfully recreated, such as the Kanda Myojin shrine, the main plaza outside Akihabara station complete with the UDX skyscraper, and even Honoka’s house and her family’s Japanese sweet shop is based on a real eatery. While it will eventually date the show, it’s still a nice touch as it feels very here-and-now, really helping market Tokyo as a cool place to visit. 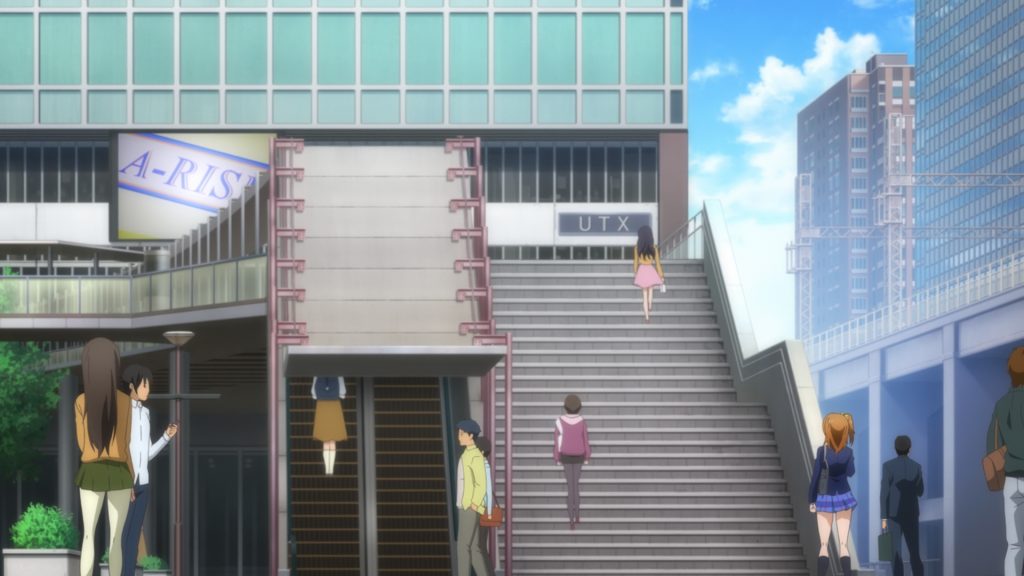 I already noted how the first episode is a bit of a whirlwind in its presentation, and while it does tone this down in subsequent episodes, it always has a great sense of energy to it, which carries over to the show’s 3D CGI song and dance sequences.

3D CGI dance sequences are very much the norm in idol anime these days, and I find these can make or break a series; as if they are too out-of-step or janky they can really spoil your sense of immersion. While the CG is very noticeable in the early episodes of Love Live!, it definitely gets better as it goes along, and the line between the 2D and the 3D quickly becomes ever more blurred.

It’s not in their execution but in how they tie in to the rest of the show that makes Love Live! stand-out however, as the song and dance sequences are fitted in to make the show more like a musical, which offers a more novel and creative approach than the rest of the genre, which can swing wildly between complete realism to rendering game-like virtual environments for performances. The musical-like presentation strikes a good balance between the two, allowing the animators to get more creative than just being restricted to a stage, but keeping it grounded enough for you to believe in the show’s own concept of reality. I felt more immersed as a result, which allowed me to appreciate the series’ excellent range of idol songs even more than I would have normally done. 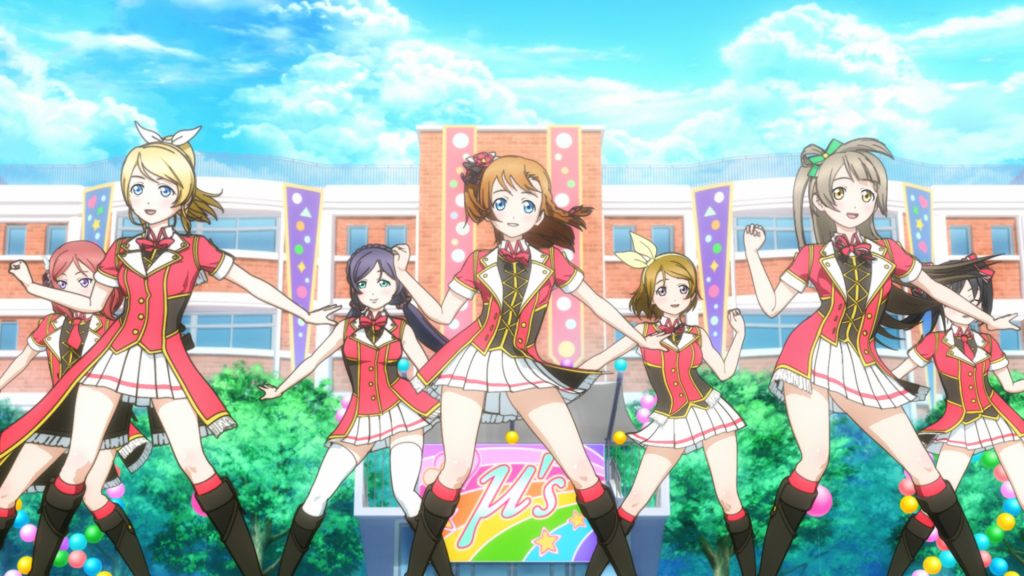 If you’re into idol music you’re in for a real treat as the producers seem to really understand the genre, giving us some stone-cold classics you can definitely break out the glow sticks to; from the likes of Susume→Tomorrow, START:DASH!! and No brand girls all the way to the show’s opening theme Bokura wa Ima no Nake de. The Japanese voice actresses do a great job of singing in-character, matching their solid voice acting in the anime. The background soundtrack, by Yoshiaki Fujisawa, is also very good and follows along with what’s happening on-screen really well.

Surprisingly for a music-heavy anime, this does feature an English dub, produced by Bang Zoom Entertainment. Featuring English dub mainstays such as Caitlin Glass, Cristina Vee and Erica Mendez, it’s an extremely competent one where they have tried to get as close to the original Japanese as possible. This is because they have (perhaps wisely) left the songs in their original Japanese form. While this means there is a slight gap between the character and singing voices, I would rather prefer they leave the original music intact rather than producing Americanised versions like they have done for some other shows. If you do enjoy your English dubs though, it sounds perfectly fine and there’s plenty of subtitle options to satisfy everyone, whether you want everything, just the songs, or no subtitles at all.

Love Live! School Idol Project is available in the UK via MVM Entertainment as a collector’s edition box set in both Blu-ray and DVD formats. The set itself could have had a lot more work put into it, particularly for the Blu-ray, as they opt for a cheaper box and a cheap-looking DVD-sized Amaray case. You do however get a small booklet featuring character profiles and artwork. On disc extras feature textless opening and ending themes, trailers and TV spots. Unfortunately, this release does not include the OVA as it was not licensed by US distributor NIS America, which would have been a nice extra. 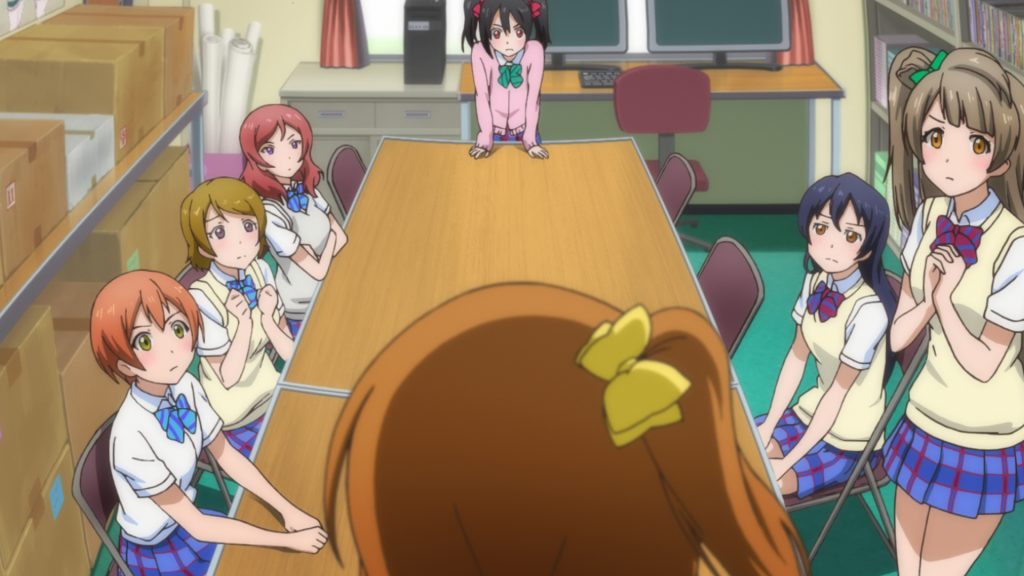 Whether you are into Japanese idol culture or not, Love Live! School Idol Project is just a really fun anime to watch. Its characters are energetic and full of life, the music is fantastic and it’s generally well animated. While the dip in the middle as it changes direction as well as leaving certain characters out of the spotlight mark it down slightly, the series achieves what it sets out to do; finishing on a high note that leaves you wanting more. A success by all accounts, this left me with a great impression and I’d heartily recommend it.