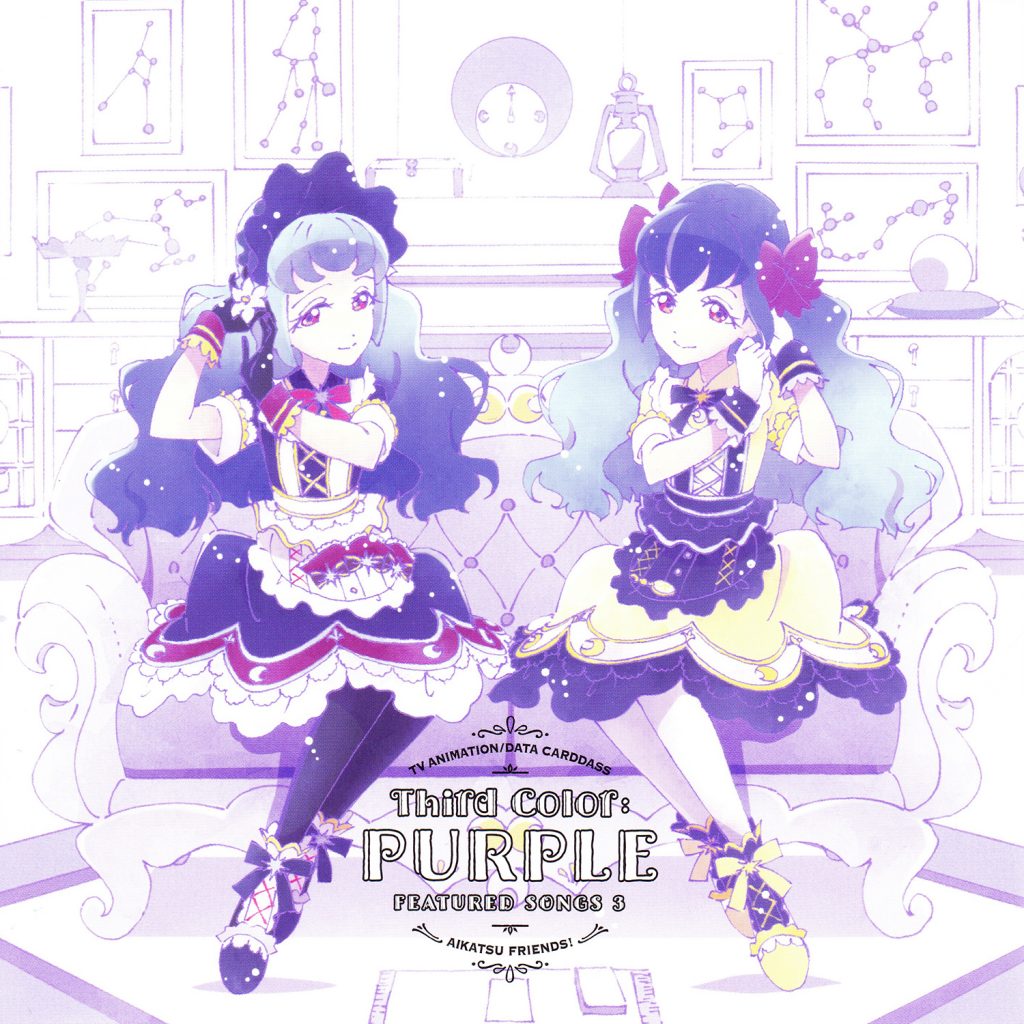 If you’ve been following me for a while, you’ll know that across every Aikatsu series, the gothic-themed songs are some of my favourites, and this new Aikatsu Friends! single release brings three new gothic tracks attributed to the Shirayuri sisters, Sakuya and Kaguya. The three certainly don’t disappoint, with them coming across as some of the strongest tracks the series has featured so far.

The more gothic of the trio, at least in a western sense, is Sakuya’s “Michibika Rete” (導かれて), roughly translating as ‘Guided Me’. Atmospherically it toes the line between spooky, haunting and mystic; from the gramophone-effect intro, the horror movie-like synth and the pitter-patter of the sounds in the bridge infused with a bit acoustic guitar. While the gothic songs in Aikatsu Stars! pulled away from the synth, this feels like a good bridge in between the original, heavier style in the original series and the slower, more classical infused take in Stars.

Singing for Sakuya here is Emiri Suyama, formerly of Niji no Conquistador, who impresses with the change of style from the cutesy, fanservicey elements of NijiCon’s music to a more mature and nuanced sound, while still remaining playful.

Moving onto the second track and we’re more firmly back into territory the original series made into its own with an absolute EDM banger. Kaguya’s “Guuzen, Hitsuzen.” (偶然、必然。) roughly translating as “By Chance, Inevitably.”, has a very strong dance-based core, with plenty of hard synthesiser sounds that’s lifted by a little bit of electric guitar and Yuuki Kuwahara’s sweet vocals. With this one we’ve basically got the electronic side at its most extreme, as it feels like a Dancing Diva song but given a lot more hardness. We’ve even got some dubstep-like elements towards the end which I know is sure to get crowds going wild. It’s still definitely got that gothic influence in beat and tempo though, so it still has that darker essence even though it has gone all in on the electronic stuff. I’m all into that though, so this is definitely my favourite of the three.

The third and final track on this single, “Kizuna -Shinkuro Harmony-“ (絆 ～シンクロハーモニー～) is a combination of both of the above and very apt for Sakuya and Kaguya’s Friends song. To clarify, the main concept of Aikatsu Friends! as a show is characters pairing up into units called “Friends” based on their friendships and bonds with each other; and the songs that both characters appear on are meant to reflect their status as Friends. This track represents the more mysterious and mystic side of Sakuya and the more brash side of Kaguya by pairing the classical influenced style with the electronic influenced style as furious piano playing and a strong electronic beat. While the chorus is the more electronic bit, I appreciate the verses more with their slower tempo and the backing strings. It also helps that Eimiri and Yuuki’s voices go well together; and that’s one of the strengths of the series as a whole, pairing the right voices to make good sounding music.

In terms of production values, I have thought the music from Aikatsu Friends! is not as smooth as many of the songs from the original series and Aikatsu Stars!, but there’s been a recent upturn and this single represents Friends getting to about where it’s predecessors were when they were just hitting their stride. Admittedly it’s hard to beat many of the ‘classics’ and fan favourites of that era, but this is showing that Aikatsu Friends! can deliver.

One thing to note however is that I’m still not a fan of them using the character names in the group instead of the idol names, as it disconnects you from their real-life counterparts, and I feel that the people behind the voices should be given more credit for their performances.

Overall then, this is a great single with some big-hitters for Aikatsu Friends! as a series and BEST FRIENDS! as an idol group. And it’s sure to delight fans both old and new, and offers those who maybe dropped out a little after the end of Aikatsu Stars! a more familiar route back into the franchise.

This single is available to purchase from Amazon Japan, CD Japan and all other Japanese music stores. It is available for streaming via AniUta and other digital streaming services.