Children’s TV is big business no matter where you go in the world, and TV producers are always trying to beat each other to the next big thing that is going to let them dive into a pool of cash. The latest hook is collectible card-arcade games, which combine an arcade game with a range of collectible cards. One of the first of these was Aikatsu!. Marketed towards young girls, each card represents a piece of an outfit, or ‘co-ord’, which can be scanned into an arcade machine for players to customise their chosen character, who is an idol-in-training at either one of the two idol schools in the game, Starlight Gakuen and Dream Academy. The player then gets thrown into a bog-standard rhythm game, with the idols dancing around on a stage to some very catchy tunes.

The anime adaptation of Aikatsu! kicked off in October 2012, and has subsequently captured the hearts of specific demographics with a rather simple, but captivating storyline, cute and sexy characters, and those aforementioned catchy tunes.

Hoshimiya Ichigo is a relatively bright, normal girl who ends up being dragged into the world of idols when she discovers her younger brother Raichi is a fan of the super-idol Kanzaki Mizuki. When her best friend, Kiriya Aoi, offers the siblings a chance to attend one of Mizuki’s concerts, Ichigo tags along with her star-struck brother only to be captivated by the idol’s performance. After the event, Aoi tells Ichigo of her intentions to apply to Starlight Academy, a well-known idol school which Kanzaki Mizuki just happens to attend. Aoi ropes Ichigo into taking the entrance examinations with her, and with a bit of luck and natural talent the pair begin their idol careers. 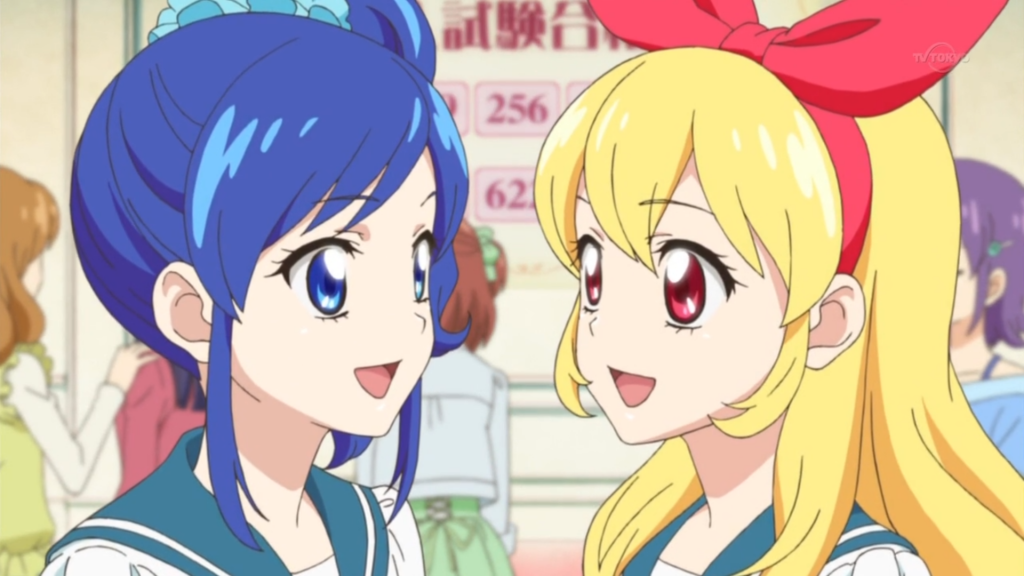 Students of the school take part in auditions, which can be for a range of realistic idol roles such as music, acting, advertising and modelling; along with putting on big performances. This is where the real-life cards come into it, which transform a simple schoolgirl into a stunning, mystical beauty. The live stage elements employ some good use of 3D CGI, with a nice fusion of the styles of the anime and the game that flows nicely in-between the more traditional animation. Idols can perform special appeals in these sequences, which are presented as some kind of virtual reality dance move where idols can shoot hearts with arrows or spin around and produce magical shapes against vivid, colourful backgrounds. While they add spice to the performance they are a bit nonsensical in how they happen and why, requiring suspension of disbelief from the viewer. Still, they are very beautiful performances where the characters are bold and eye-popping, with a set that is usually designed to fit a specific music track. 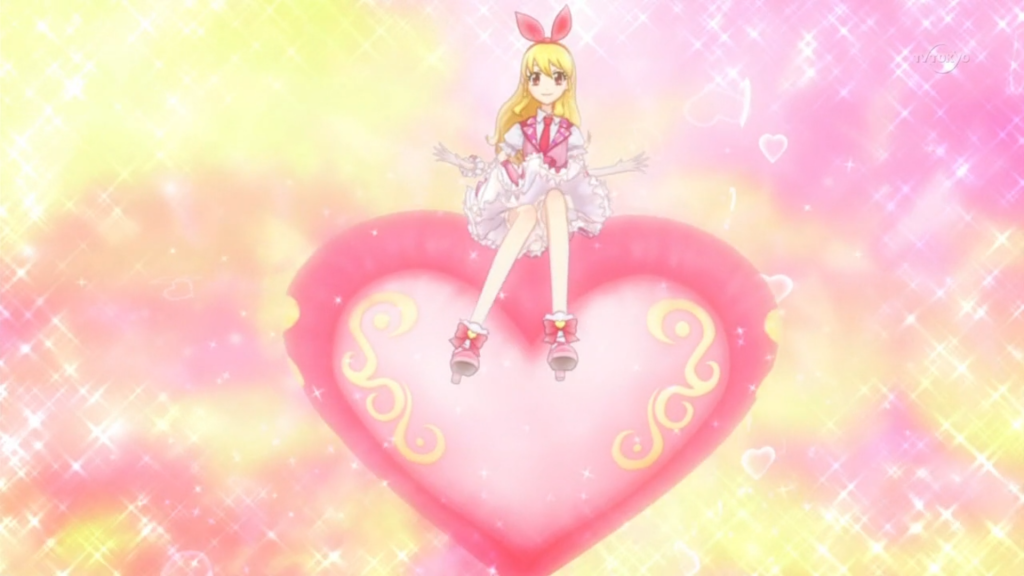 Ichigo pulls off a special appeal

The musical numbers in these sections are one of the best bits about the show, and put idol group STAR☆ANIS’ vocals to a range of genres from your standard idol music all the way to gothic rock, the latter being very much reminiscent of the popular ‘kawaii metal’ band, BABYMETAL. STAR☆ANIS is a separate group of people, however, and the anime voice cast do not actually sing in the show. It’s a rather sensible decision that allows the production team to unify both the game and anime worlds musically, meaning that if you hear a song in the anime and love it, you can hit the arcades and are able to play it yourself. It also allows for getting a lot of money out of merchandise, as the series has output eight singles and two mini-albums/EPs to date, along with a soundtrack and an upcoming full compilation album.

The majority of the cards used for the auditions and live events are taken from the real-life game. It’s a costume designer’s field day with some beautiful outfits being shown, designed in collaboration with AKB48. While it’s not surprising the producers chose the group that seemingly have a stranglehold on the Japanese idol music market, what is surprising is how good the costume designs turn out to be. With several brands hitting different styles; such as Angely Sugar (cute and feminine), Spicy Ageha (adult and sexy), Futuring Girl (futuristic) and LoLi GoThiC (Gothic Lolita); there’s a lot of variety to appeal to the tastes of everyone watching the show. 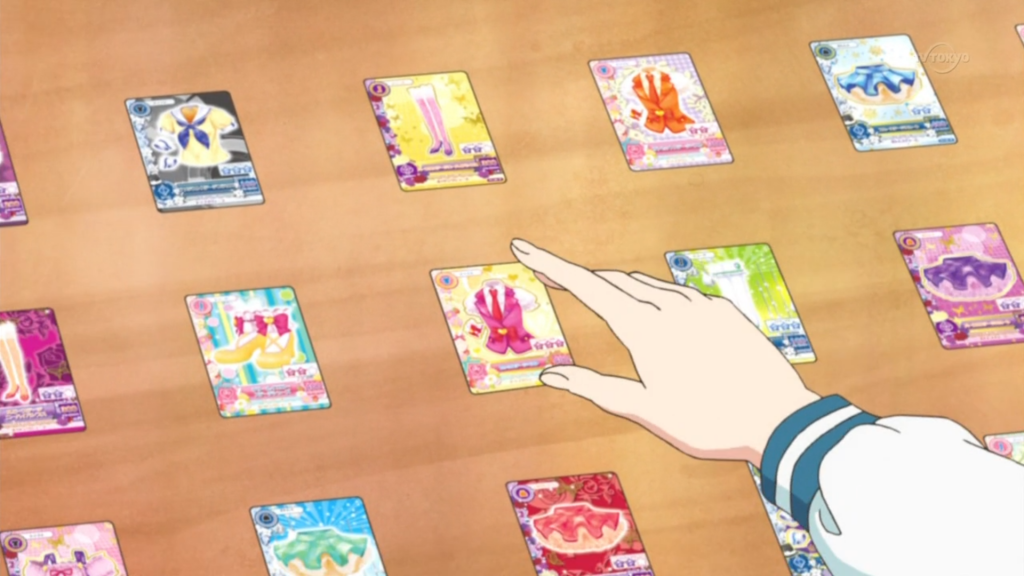 Admittedly, this is a commercialised kid’s show, so even though it does have a large range of appeal, it still won’t be everyone’s cup of tea. It is designed to sell merchandise like any other anime of its type, but by having the arcade game, the merchandise has a greater scope for fun than its rivals.

While the girls start out with the standard school co-ords, they build up their card wardrobes as the show’s plot develops and we see more of the idol world, as the majority of these come from the large cast of background characters. Each brand has a central designer behind it, and the character designs reflect the brand’s image. Out of these, one of the best is the designer for the Magical Toy brand who is an actual clown, which conjures up the perfect image that the brand represents. The designers and secondary characters give Aikatsu! a lot of life and a larger feel than just being centred on the idol school.

However, nowhere is livelier than the school itself as new idols are introduced thick and fast who develop over the course of the series to be both friends and rivals to our main pair. There’s model Shibuki Ran, popcorn obsessed Arisugawa Otome, gothic Lolita Tōdō Yurika, kabuki theatre heiress Kitaōji Sakura and American idol Ichinose Kaede. While the main cast do fit some generic stereotypes, they progress well in their development over the course of the series, and by the end are lovable and rounded out.

The expanded cast get their moments later on in the series

The downside to having a large cast is finding the right balance in character screen time, which becomes an issue for the fan who becomes attached to a particular girl. The presented balance feels right for the show and the focus of its plot, but some characters don’t get enough screen time as they deserve.

There’s also comic relief abound in the supporting cast within the school, with Johnny Bepp entering the fray as a hilarious caricature of real-life actor Johnny Depp. He is arguably one of the best characters in the show, with his bounds and leaps from his dancing career and cries of “Honeys!” Sadly, out of the school’s staff only Bepp, headmistress Mitsuishi Orihime and janitor/groundsman/dogsbody Suzukawa Naoto make an appearance, and lessons aren’t really represented other than dance and homeroom. It’s a missed opportunity, as the school setting offers a lot of potential to show more of the behind-the-scenes action in how the idols learn their stuff. It’s a surprise that the anime doesn’t lose anything from this, but the producers offer character development up in other areas that performs the same function. 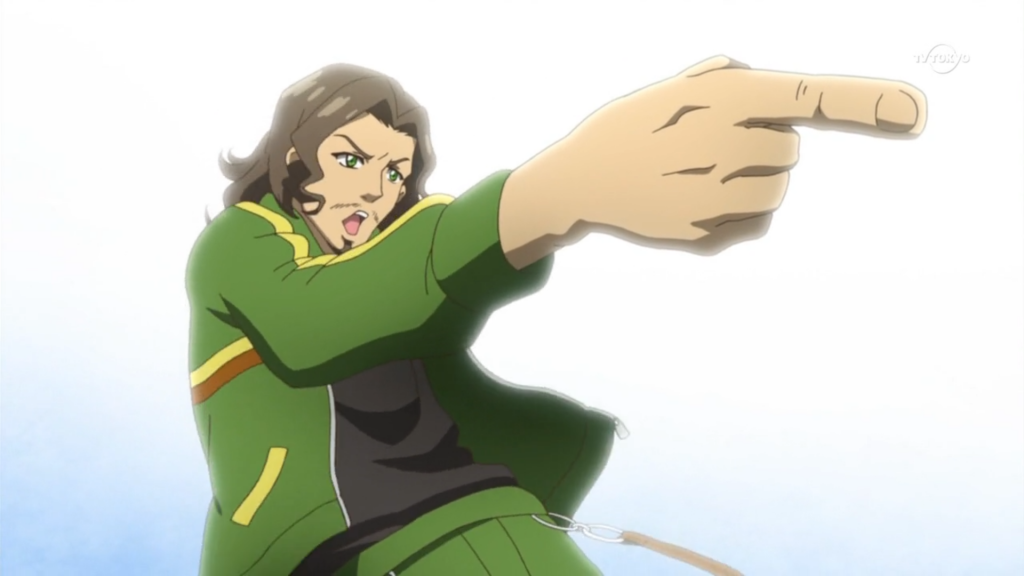 With an impressive length of fifty episodes, it takes good production and direction to keep up character development and audience interest through to the finale, and thanks to this Aikatsu! becomes very addictive. Each episode is loaded with fun, sparkle and shine, with care and attention that is unexpected for an anime aimed at the young girls market. Its nearest comparison is the Pretty Cure franchise, which often has trouble maintaining form long-term, and in that sense Aikatsu! blows its competitor out of the water. Tension builds quickly over the main plot developments, as you desperately want your favourite girl to succeed, while filler episodes still offer decent character development and story progression.

While Aikatsu! doesn’t introduce anything relatively new in anime terms, it combines concepts into a lovable combination that consistently hits the right notes. Although the show is designed for young girls, its variety gives it a larger appeal and its story and characters are well constructed and full of life. The music and atmosphere will have you bopping along with glee as you are swept up in the intense rivals and friendships of the cast. While not quite a classic, it has certainly made a surprising impact and promises to keep the children’s anime market moving forward.