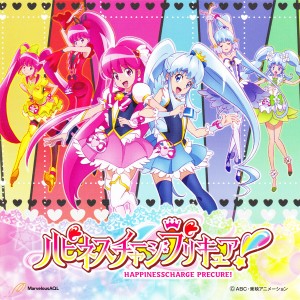 The quality of the PreCure opening and ending themes have varied massively over the years, with some genuinely catchy tracks mixed in with some disappointing, generic stuff.

I came into the franchise with Smile!, and that had an opening that hit it off with its fun and memorable lyrics. DokiDoki’s opening on the other hand was rather forgettable, but here with HappinessCharge, Toei are finally back to winning ways with an opening that is fun, catchy and highly entertaining. Admittedly, the beginning of the track, with its multiple cries of “HappinessCharge PreCure!”, feels a little jarring, but as we launch into the actual track you can’t help but feel like you want to skip along with it without a care in the world. It ties in nicely with the initial plot too, with the voice actresses of Cure Lovely and Cure Princess getting some quick insert action. Sadly as the plot develops and we get the full PreCure team this won’t make as much sense; yet at this moment in time the anime revolves around the relationship between the two girls.

The ending theme to HappinessCharge, PreCure Memory, is the second PreCure ending theme to really grab my attention and manages to create a fun song that encompasses the ten year history of the PreCure franchise. Previously, they’ve provided hints in the ending themes at the next PreCure series, with the main example being one of Smile’s ending themes featuring the phrase “doki doki”. Here in HappinessCharge’s opening theme, three previous PreCure series are credited that I can pick out, namely HeartCatch, Smile! and DokiDoki. It’s a nice touch that’s sure to make any PreCure fan crack a smile at the loving reference. The track has an incredibly joyful bounce to it, similarly to the opening theme where it makes you just want to get up and move to this music. In terms of an overall package, this makes it meld well together with the opening to create a single immersive sound experience.

The PreCure themes are quite hard to get into if you aren’t particularly into either the franchise or magical girls in general. The vocals are generally quite childish to match the franchise’s target audience, where the overall objective is to get the kids to sing and dance along to allow them to have some fun with the show.

If you can get past that barrier and are unashamedly willing to sacrifice your life and your bank balance for magical girls, then this single is something you’ll have immense fun with. It’s recommended, but only to fans of the PreCure franchise and the magical girl genre.