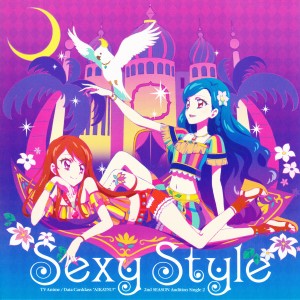 The second insert song single from the second season of Aikatsu! opens up with one of the best songs from the series to date: Kira・pata・shining. The track is the main performance song of Dream Academy’s designer-cum-idol Kazesawa Sora, who uses her life experiences to create her own brand, Bohemian Sky. The song’s repeating rhythm is very catchy and is sung well by Sunao from STAR☆ANIS, as the idol group continue to impress with their general ability to adapt to different forms of music. It’s certainly a different style than what has ever been heard on the anime before, and it seems like it wants to put those Bohemian roots to good use. For those who aren’t clued up on their history, Bohemia is the modern-day Czech Republic, and bohemian has been used to refer to the Romani people, or more commonly gypsies, particularly by the French. As a result of such influences, it has an exotic, folky feel.

The single turns to playful idol pop with マジカルタイム (Magical Time). This track is the main song for Saegusa Kī, who uses the Magical Toy brand. This is a really fun one, and an inclination that the second season is really upping the music stakes – some of the first season’s music was at times a bit uninspiring. It’s still got the typical idol and Aikatsu! themes, but fits well as a character song for Ki, representing her energetic personality.

The final track on this single, Dance in the rain, offers a more classic pop combined with idol goodness, with the beginning seemingly reminiscent of old western tracks like Stand By Me. Launching into the main track, it’s playful but refreshing, perhaps slightly edging towards the mellow side, at least in terms of idol music. It does have a nice little guitar solo in it, but overall doesn’t offer as much impact as the other two tracks. After the bopping madness of Kira・pata・shining, I think something a bit more calming is the best way to go, and this fits the bill.

As per usual with an Aikatsu! music release, here you bag some bonus cards: Spicy Ageha’s Bijoux Onepiece and Boots with Black Knee-High socks.

So, is this single worth buying? As always with Aikatsu! it depends on whether you like the individual tracks, but with at least two impressive, energetic tracks from season 2 here, any Aikatsu! fan will not be disappointed.