Hope’s Peak Academy is an elite school where the ultimate students in their respective fields are enrolled to lead humanity to a glorious, hope-filled future. Makoto Naegi is one of those students, but unlike his fellow classmates he has been chosen by sheer luck out of a mass of ordinary students to attend via a lottery. Leaving his dear family behind, Makoto rolls up and enters the school on the day of the entrance ceremony, but oddly falls unconscious. When he awakes, Makoto finds himself trapped inside the school with fourteen other Ultimate students and informed by the headmaster, the fiendishly two-faced bear Monokuma, that the only way out is to murder another student and not be found out. 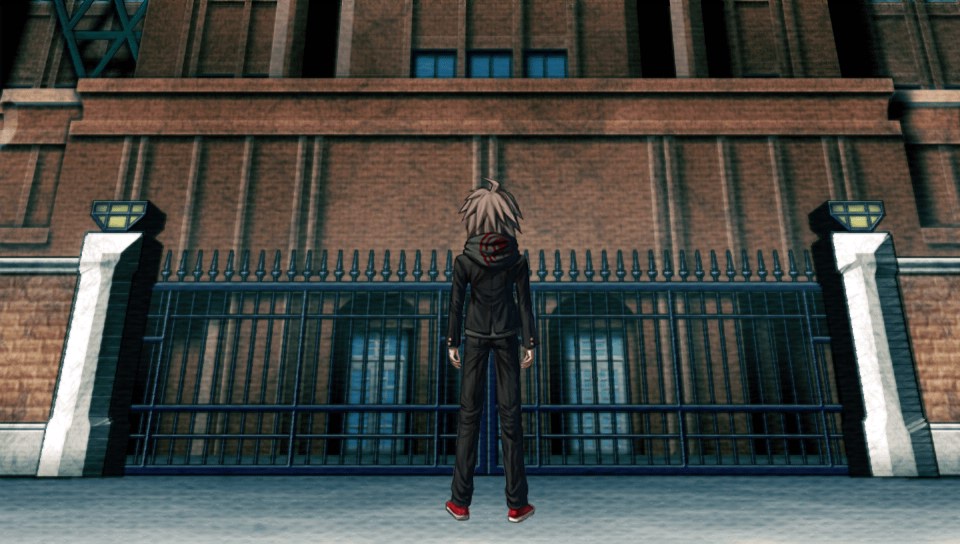 What we’re presented with in Danganronpa: Trigger Happy Havoc is a murder mystery point-and-click styled visual novel which follows Makoto Naegi as he is plunged into a fragile world where hope and despair border a fine line. Each spin of the barrel follows a similar pattern of gameplay, divided up between the peaceful, idyllic Daily Life, and the murder investigations and suspicion of Deadly Life.

Daily Life is first and foremost quite linear and story-driven, but still gives you time to explore the school and interact with a hilarious cast of characters, many of which you’ll get to know well through Makoto’s eyes in these chummy opening stages. Character designs are by Rui Komatsuzaki and typically caricaturise popular stereotypes – for example there’s gothic Lolita girl Celeste, who has a striking selfish personality hidden underneath her cute exterior and is the Ultimate Gambler, Hifumi Yamada, a fat male otaku and doujin creator as the Ultimate Fanfic Creator, and foul-mouthed punk Mondo Owada who is the Ultimate Bike Gang leader. While this sounds quite typical for a Japanese game aimed at the typical geek market, their personalities are exaggerated to the point where they become very unique and you’ll inevitably fall in love with them as they strive to overcome their trials and tribulations. 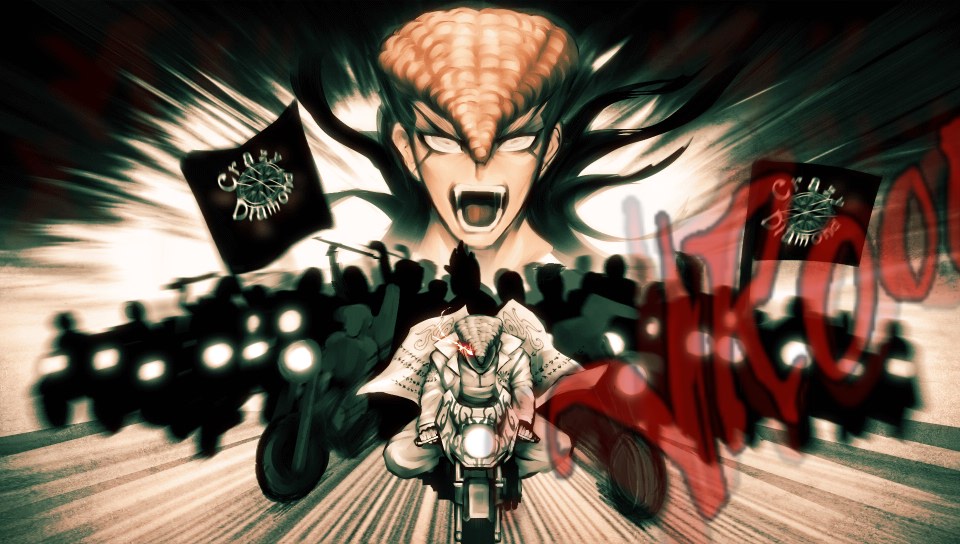 Taking a first person perspective, you roam about the school exploring through the areas that gradually open up with story progression. When you’ve hit on everything of note, time will advance and you’ll be granted with free time, where you are free to explore wherever you like and interact with the cast. Doing so critically fills character report cards, granting you special abilities to use in the main meat of the game, Deadly Life’s class trials.

Murders, driven by the casts’ personal desires and Monokuma’s luring motives, switch the game into Deadly Life, thrusting you into the depth of investigations and class trials; where the outcome is to identify the guilty party, or the ‘blackened’, to keep the rest of your classmates alive a little bit longer.

Investigations typically involve exploring the crime scene and other key areas for clues as you try to piece together the events of the murder to take into the class trial. While you have quite a bit of freedom, the plot tends to guide you towards specific locations and items of evidence, so you’re very unlikely to miss anything out. This may seem quite easy, and while you can figure out the culprit during the investigation later cases insert red herrings and other goings on to make you think again and lead you down the wrong path. 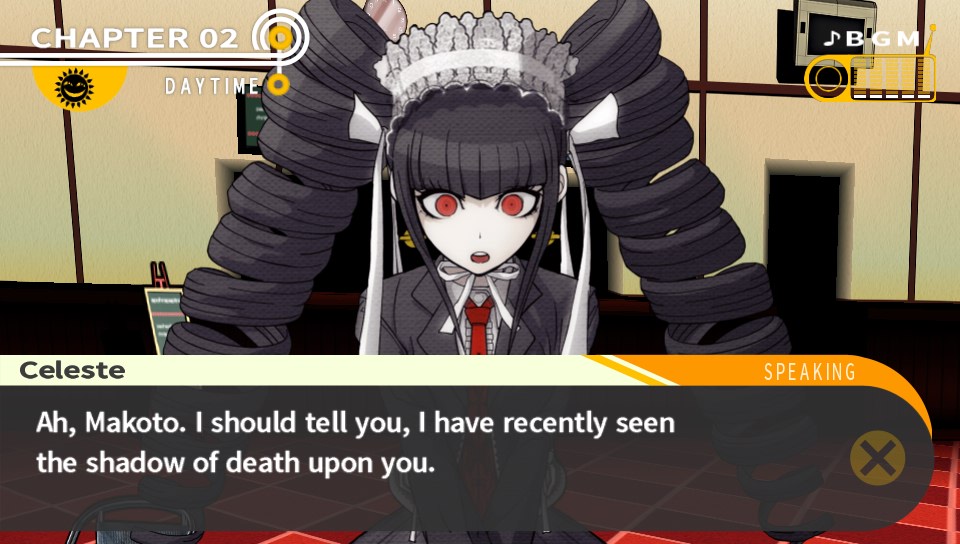 Once you’ve gathered the evidence, the investigation will climax in a deadly class trial, which does bear some comparison to the likes of Capcom’s Ace Attorney franchise. As you follow the dialogue you have to point out contradictions in testimony and present evidence, directing the trial to its conclusion. Here the gameplay splits itself up into minigames, breaking up the trial somewhat into several distinct sections built upon a specific gameplay style.

At certain points in the case discussion, gameplay will switch to the first of these, the Nonstop Debate. In these heated discussions you put to use the evidence gathered earlier as Truth Bullets, which you fire by touching the correct yellow-highlighted contradiction in the dialogue. It’s not as easy as it seems as the game will take multiple attempts to redirect you with a variety of statements; and noise lines, pointless babble highlighted in purple, will often obscure the statement you want to fire at; requiring either precise timing or obliterating with the cross button to avoid. The second minigame, Hangman’s Gambit, is slightly trickier, as you’re asked to complete a word that represents a piece of evidence that’s commonly hidden within the investigation plot and dialogue rather than being stored as a Truth Bullet. 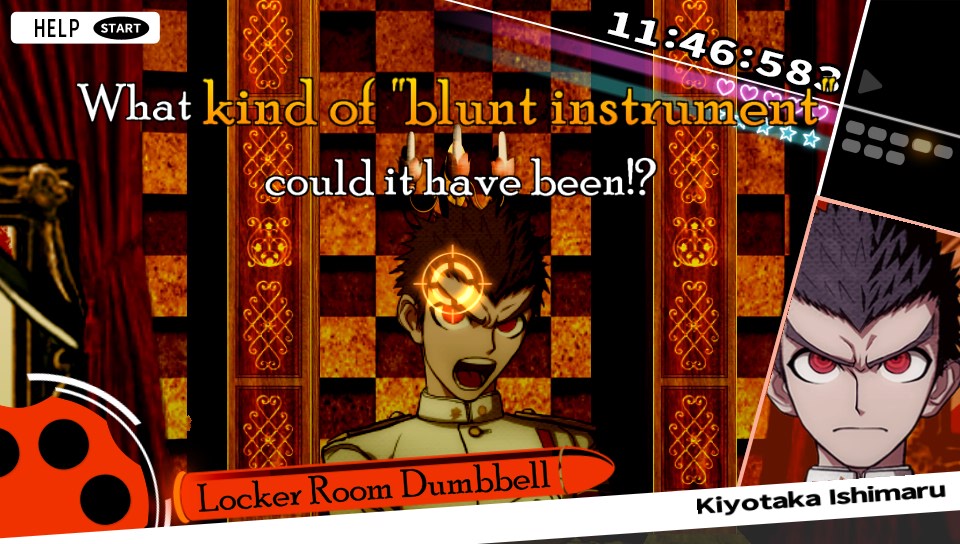 As the case progresses and you get closer to the truth, some characters will get flustered and suspicious, and you’ll have to root them out in Bullet Time Battle. This is a bizarre cross between a rhythm game and a shooting game that directs you to shoot down your rotten classmate’s false statements while controlling the pace and reloading by tapping away to the beat on the bottom of the screen. It’s a hard mechanic to grasp that will at first have you failing the case time and again; but when it finally clicks it’s actually a lot of fun. And despite the high level of failure, there’s no risk to taking a trial-and-error approach; if you run out of health during any of the minigames by failing to fulfil their objectives the game will handily put you at or around the point at which the minigame started. This thankfully saves the annoyance of chucking it all away and starting the trial from scratch, but gives it an easy ‘just pick anything and see what happens’ feel.

Finally, once you’ve argued, puzzle-solved and laughed at the casts’ hair-brained antics, you nail down the facts in Closing Argument – placing events in the correct order in a comic book format. Your only restriction is time, but you get plenty of it in order to replay events in your head – just watch out for the additional selections that are meant to mislead you, they’re often fiendishly similar to the correct one. 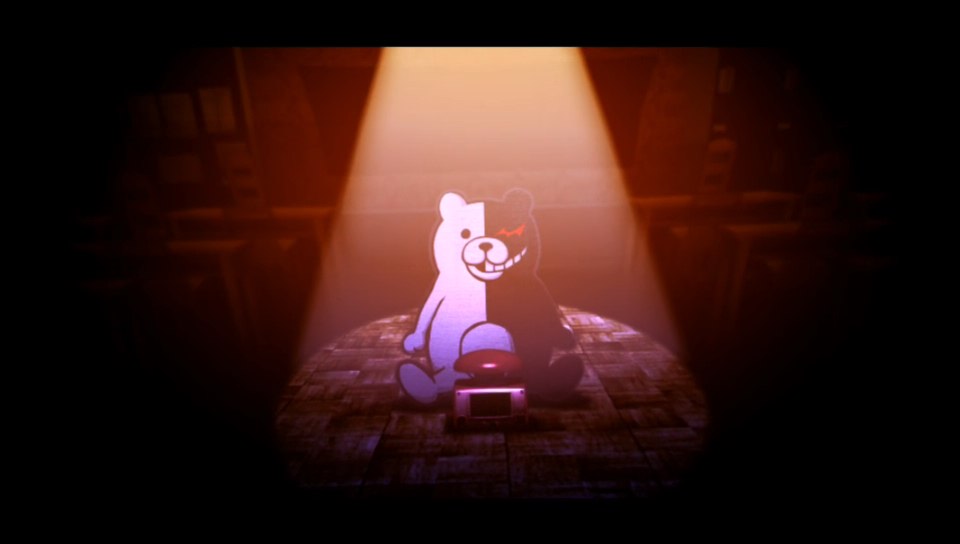 When you’re all done, sit back, relax and enjoy the delights of the game’s presentation as Monokuma serves up a fatal punishment to the culprit. These delightful animated cutscenes are just one part of the game’s odd and slightly disturbing art direction, with blood coloured a vivid pink for emphasis, cardboard cut-out character sprites in rooms and character expressions that turn the beautiful into the downright ugly and crazed. The soundtrack, composed by Masafumi Takada, is also outstanding, giving us a memorable main theme and some high impact tunes that steadily raise the tension past boiling point. All of this has to turn and run on a tight script, which for the most part reads well, although the abundance of bad language seems vulgar and childish for a well thought out concept, an issue that seems quite prevalent in American translated editions of Japanese titles.

The main impression you get from Danganronpa: Trigger Happy Havoc is one of quirkiness. The characters are troped oddballs that feel right at home in a plot about being taken prisoner by a robotic bear to plunge everyone into despair, which on paper sounds like a lunatic’s nightmare, but it’s downright entertaining. While it’s a certain recommendation for visual novel lovers, those who have ever looked into breaking into the genre now have an excellent entry point.

Extras included in the release mostly comprise of movie, art and sound galleries where you can spend Monocoins discovered throughout the game by clicking on specific items to unlock bonus art and the game’s soundtrack. There’s also the Dangan Academy spin-off story where instead of solving murder cases, you have to direct your fellow students to build a variety of Monokumas to escape.