The claymore: a Scottish longsword that was in use between the 15th and 17th centuries and famously used by William Wallace, is the namesake for this anime adaptation of the hit Shonen Jump manga written by Norihiro Yagi.

These twenty six episodes cover the first eleven volumes of the ongoing manga, which is set in a fictional medieval world that is terrorised by hideous beings known as Yoma that like to dine on human innards. These creatures range from typical demons and cookie-cutter trolls to more elaborate designs based on beasts and animals such as lions; and have the ability to hide themselves in human forms. A disguise is the perfect way to assimilate into human society and stalk out prey – even sliding into families to tear them apart. 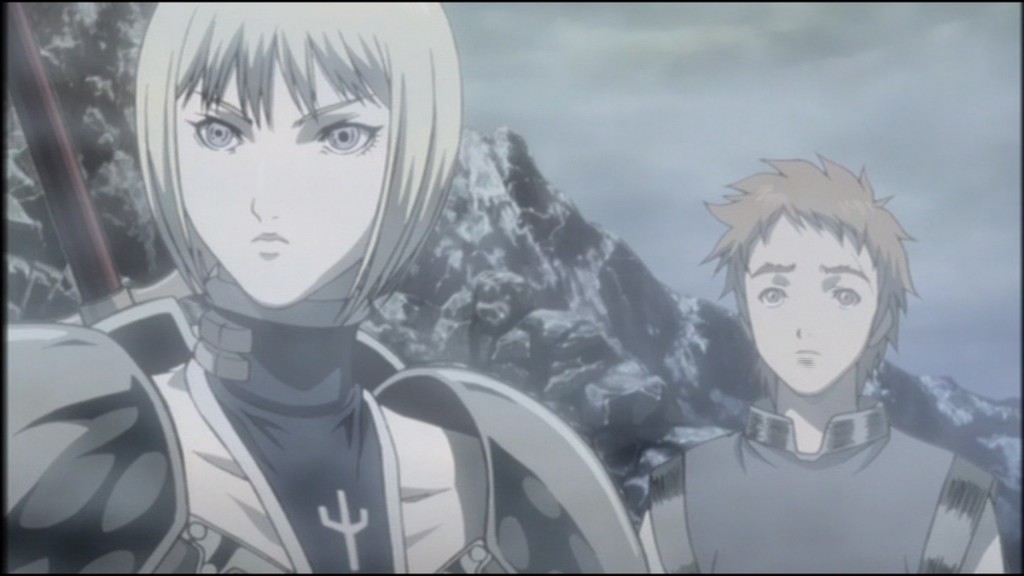 Our main Claymore Clare, on her travels with Raki.

Raki is one young man that finds himself the only survivor after a Yoma disguised as his brother kills his family. He is saved from the attack by a Claymore – human-Yoma hybrids that wield giant swords in an endless battle against the monsters. As a relative of a Yoma, Raki is shunned out of his home in the residents’ fear of him bringing more death and destruction to the town. With nothing left, he makes after the Claymore who saved him, setting his fate to be dragged into both a war between the two species and a personal battle for vengeance.

Claymore is a violent tale of facing the terrors of the dark that infuses the intense action with some tender drama. As a shonen series it puts a firm hand up to the cutesy girls of many popular properties and takes a masculine stance with its tone and art style, coming off very similar to series such as Berserk, which is probably Claymore’s closest companion.

Fantasy tales of lone medieval-style heroes are both very common and very masculine, and Claymore shakes things up with its majoritively female cast. While we eventually get to witness the power of a variety of Claymore warriors, it is the abnormal Clare that Raki has chosen to follow. She’s the perfect picture of a steely warrior, with cropped hair, a harder and more realistic visage and greater in stature than the young man at her side. It’s clear to draw a line between steely and unemotional; while these warriors are presented as excessively strong, they aren’t inhuman monsters. There’s an emotional depth and range that exceeds their outward appearances, and this enables a rich connect to the viewer who can empathise with the Claymores’ individual struggles. The Japanese voice cast play this off excellently, sounding like mature women, pushing the emotional values of the script through the voice work. 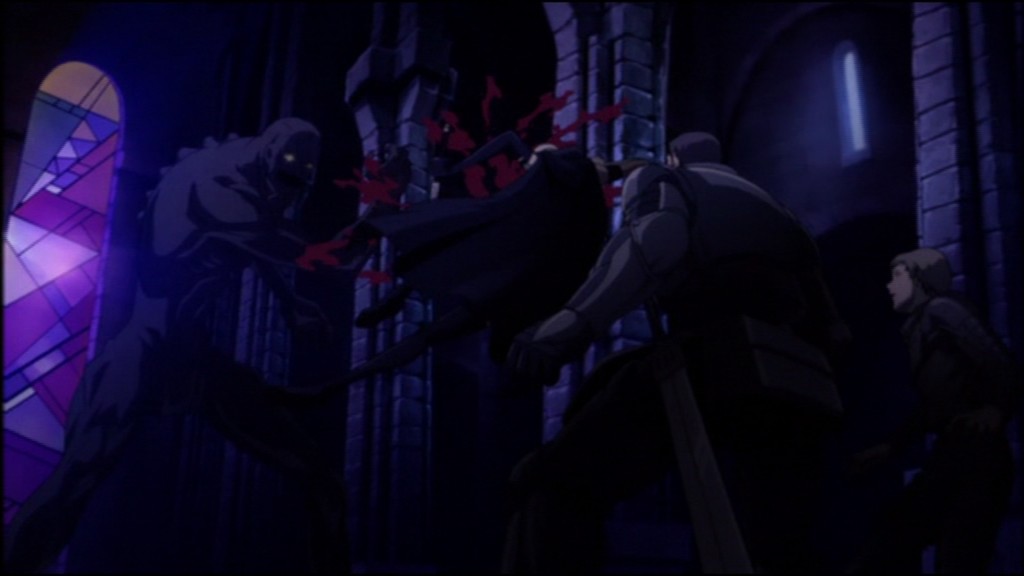 Clare fighting a Yoma early on.

Clare can come off seeming a little flat, but the delivery feels realistic for a character that has been badly damaged by intense trauma through her past, which is shown in an elongated flashback from episode five. The similar circumstances of Clare becoming a Claymore and Raki becoming her footpad feels like excessive repetition, and the impact of the story may possibly have been more effective if this had been avoided and told chronologically. On the other hand you can see the point of the introductory episodes, which serve to introduce key concepts like the Claymores and Yoma, as well as points important to the flashback arc, including how the Claymores use their Yoma powers, and the threat of turning into Yoma themselves if they exceed their limits of control. It’s six-and-two-threes, but it’s still a strong start no matter how you look at it.

And that’s helped immensely by the series’ focus on the intense action. While the weaker Yoma can be dispatched by a simple sword swing, the majority are hulking beasts which push the warriors to their limits. Within the furious swinging, leaping and slashing lies some interesting strategic elements that require the use of a brain rather than sheer power. An armour-plated Yoma requires hitting in specific weak spots to disable, while others require the ‘half-awakening’ of body parts into their Yoma forms in order to give the Claymores frightening abilities such as lightning fast reflexes or arms that can stretch around an enemy. While the variety and creativity of the powers is welcome, they become overused as the series progresses, moving from hidden special move to one of the usual repertoire. This removes the feelings involved in using the abilities and takes the bite out of them, no matter how spectacular they look. 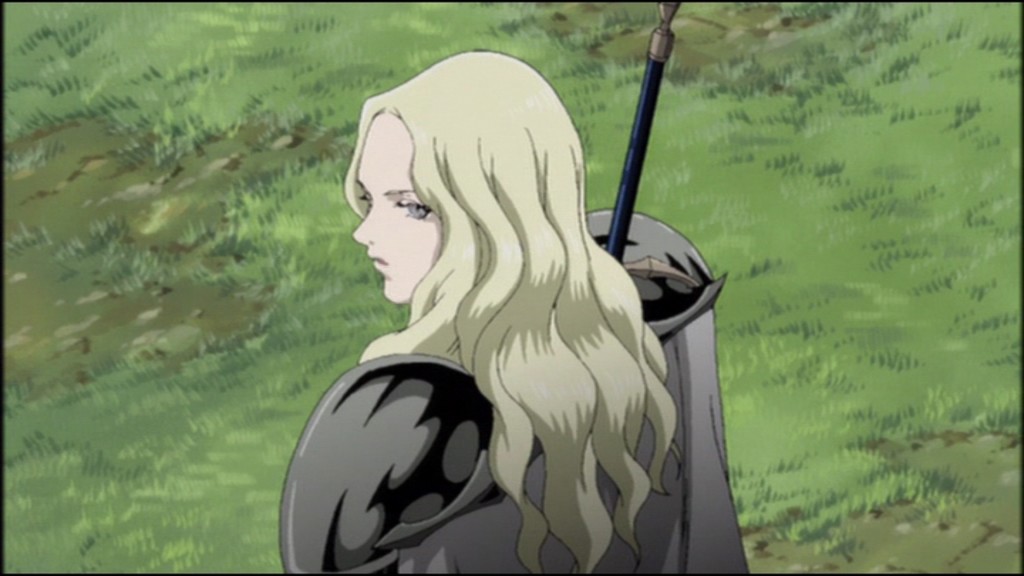 Teresa is the main focus of a flashback arc concerning Clare’s childhood.

Getting in the way of the action scenes is the weak script and dialogue, which majoritively ends up as repeated cries of “I’ll kill you!” While it’s a decent way to show anger without going down the hellish road to profanity, it takes a chip away from the enjoyment of battle and becomes enough to be a major annoyance in the late game, especially when it is unneeded – the visuals are often enough to do the talking. Outside of battle, conversations are certainly more meaningful in allowing the viewer to understand the plot and mythos of what can be considered a fascinating world.

It’s one that is quite well constructed and easy to navigate, although towns seem to have a more generic location. It’s pleasing that it continues to draw on Scottish elements, with highland plains, rugged mountains, and a sequence that is clearly inspired by the Loch Ness Monster. Actually, there’s very much a vibe of the classic movie Highlander, with the Scottish environment, big swords and the only way to kill a Yoma being to behead it. The soundtrack, by Masanori Takumi, provides a nice atmosphere with frequent use of bagpipes, along with creepy tones to emphasise the horror aspects of the series.

It’s not just the music that excels; heavy emphasis is placed upon the use of sound effects, in particular the distinctive metallic clink of the Claymores’ boots. A Claymore’s approach into town is always accompanied by it, and serves well in building tension and expectation in the viewer for a big moment. The whirl and clunk of swords meeting claws and flesh makes the action hit home among the roars of the Yoma and screams of terrified townspeople.

After their Loch Ness Monster encounter, Clare and Raki become separated, instilling fear that Raki, for all his whining, was simply a throwaway companion. This isn’t the case though, and as we turn towards the end he still has a big part to play in one of the show’s central themes of showcasing the fine line between humanity and Yoma. He becomes one of the few characters to pity the creatures for the humanity that they have lost; a stance that was just waiting to be explored. There’s also a feel that some Yoma are more human than their ghastly features make them out to be – they are portrayed not just as mindless monsters but creatures with ambition, intelligence and a will to carve out their own existence. This theme becomes key to the deviation of the adaptation from its source material, where it attempts to close off the series that ties together the themes of revenge and salvation. 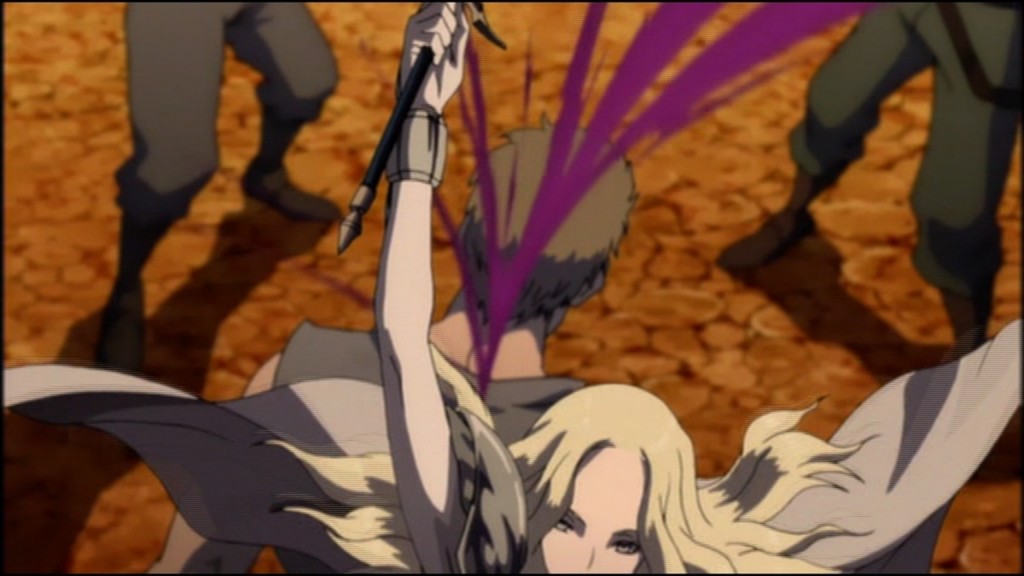 The violence is profound, and the purple Yoma blood is a visual cue for identifying them from humans.

While keeping this adaptation firmly at the twenty six episode tally with a satisfying final confrontation, the tone gives us mixed messages: there’s satisfaction in the preservation of the humanity of our band of Claymores, but disappointment in the lack of plot fulfilment. But at the same time this isn’t necessarily a bad thing – it wants us to feel exactly what Clare feels, and in its final moments it certainly achieves this.

Claymore is one brutal and bloody adventure worth watching. While it does have its flaws, particularly in its script and dialogue, the combat scenes are mesmerising and it should be applauded for not just its mature and gritty feel, but also for sticking close to its Scottish roots with its world structure and soundtrack.

There’s a nice bundle of extras in Manga Entertainment’s packaging of this Funimation release, which includes the standard textless opening and closing themes; commentary tracks for episodes 8, 11, 16, 19 and 26; staff interviews; cast auditions for the English dub; Japanese commercials for the series; and production artwork.