LET’S FACE IT, magical girls are an acquired taste. Aimed at young girls with stories that function in the same way as fairy tales, where good will always triumph over evil; the genre teaches girls those exact same fairy tale morals. However, with their main casts typically young girls dressed in cute outfits, the genre has gone from being watched mainly by young girls, to adult men. The magical girl genre needed something to revitalise it for this older male audience, and it fell to Shaft to create it.

That said, the first couple of episodes of Puella Magi Madoka Magica would leave you thinking nothing has changed, despite a dramatic opening scene in which a lone girl fights an unseen enemy among crumbling buildings, as the titular Madoka looks on, standing beside a suspicious white cat with long ears. No, you haven’t jumped ten episodes by mistake – the scene is revealed to be a nightmare, as Madoka awakens to her seemingly too perfect life; surrounded by her loving family and two best friends, Sayaka and Hitomi.

As with all perfect lives, Madoka’s begins to shatter as the girl from her dreams shows up at school as a transfer student. There’s an air of mystery about Akemi Homura, as she deftly introduces herself, and it’s easy to come up with theories as to who Homura is, but how does she know Madoka so well, and why give a warning not to change, when our view of magical girls is of bright, eternal heroines?

Slowly, Madoka’s dreams continue to blend into the real world, and an after school shopping trip sets the girls’ fate. After hearing cries for help, Madoka ends up in an abandoned part of the mall, where she meets Kyubey, the cat-like creature who is mercilessly being attacked by Homura. As Sayaka enters the scene and they attempt to rescue the creature, the girls find themselves trapped in their first foray into the series’ alternate world. These spaces bring the series’ beautiful sketchbook art style to the fore; a stage set with a large amount of colour and strange creatures, such as clouds with moustaches. There’s a lot of movement in these types of scenes, with the lines around the creatures shifting as they walk towards our unlucky pair, showing their malevolence.

The creatures don’t last long, however, as the second magical girl enters the stage. The yellow clad Tomoe Mami declares Kyubey a friend, unlike Homura, who seems hell-bent on murdering the creature, and thanks Madoka and Sayaka with some cake and tea. It’s here we discover that Kyubey is out to recruit magical girls to fight against the evil known as witches – and it’s chosen Madoka and Sayaka as its newest recruits. All that is needed is a single wish.

This sequence falls into a set of genre staples which act as the setup phase of a magical girl series. This is where the main characters and villains are introduced, and produces a situation where one girl has no choice but to transform into her magical counterpart. Those destined to become magical girls have distinct, flashy hair colours, which is a common technique used to help younger audiences identify the main characters. However, it’s used here in a more clever way, for at least one of them is a red herring.
Even while these genre staples exist, there is a darker, more mysterious tone about them, helped along by the musical score, composed by industry veteran Yuki Kajiura. Haunting themes cover pivotal, emotional scenes, and well-fitting action cues build up the tension to series defining moments.

These come along every so often, in between the girls deliberating over whether they should become a magical girl, and what wish they should give to become one. And it’s after these few slow paced episodes that everything begins to turn on its head and the series begins to show that it is not for young girls. Events quickly escalate and the tone of the series darkens. It’s no longer about cute girls having wild magical adventures – the stakes have been raised and there is a very real threat and feel of terror.

This is where Madoka Magica differs from other magical girl series – there is no revelation that leads to a new power that defeats the latest enemy of the week, and no secret solution to getting out of a tight corner. Lives are toyed with like dolls, friends have hidden agendas, and saving the world is the worst possible thing you can do. As the series draws towards its end, you are left begging for a resolution; a catharsis; and as everything falls into place, at the end, the true nature of a magical girl has thankfully not been forgotten.

Rewatching the series is certainly a must, revealing all of the hints and cues that were present from the very first scene in episode one. Until you have seen it once, it’s impossible to truly understand why specific characters act as they do, and that understanding reveals so much more about the structure and design of the series. It tells its story in a backwards-roundabout kind of way, in a format typically reserved for modern science fiction shows with huge over-arching plots. When you compare the two, you realise how successful Madoka Magica actually is in defining a magical girl genre that isn’t just ‘cute girls versus enemy of the week’, but one that can be truly enjoyed by a mature audience. 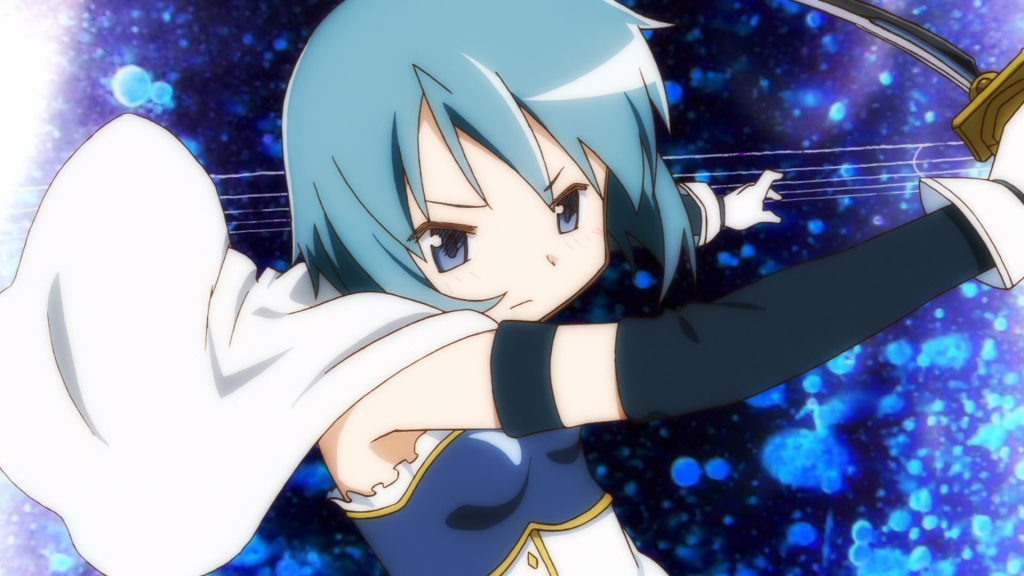 Puella Magi Madoka Magica takes the best bits of the magical girl genre, tears away the rest, and creates a show that uses those best bits to construct something fresh. It’s truly a delight to watch, and is set to be one of the classic anime with the might of its popularity. With a sequel movie due to conclude the series in the autumn, that popularity sees no sign of abating any time soon, and gives you high time to lose yourself in a world of magical girls, witches, and a walking emoticon all over again.