This summer, I had the pleasure of spending a week in Japan’s capital, where I got to see some of the key attractions that the city has to offer. In the second part of this feature, I’ll be taking you on a ride west to Mitaka to see the Studio Ghibli Museum, around to Nakano Broadway, and then back to Shinjuku for the welcome dinner.

The Studio Ghibli Museum was the first port of call on the first of five very warm days. This meant taking my first trip on the Japanese rail system. Shinjuku station wasn’t particular far from the hotel – a mere five to ten minute walk past clubs, bars, shops and a Taito arcade brought me in sight of the station with the department store Lumine Est. sitting on top of it. 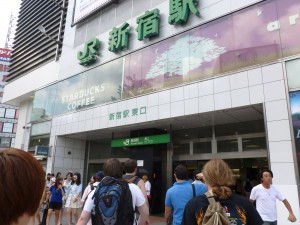 The east entrance of Shinjuku station

For a first time visitor, using the rail system may feel a bit daunting, but it’s very easy to use when you get used to it. For general travel around Tokyo, you want to use the green Japan Rail (JR) ticket machines, which do have an English language option. Overhead are displayed maps of the rail system, one in Japanese, one in English. Look for the station name on the map of where you want to go to, and note the Yen value beside it. This is the ticket price to get to that station from where you’re at. Simply choose this price on the ticket machine, and pay for your ticket. You’ll then use your ticket to get past the barrier, but don’t forget it as you’ll need it to get out at the other end. The platforms themselves are well signposted, so it’s not too difficult to find you way around. Trains are very frequent, and are fully air-conditioned to relive you from the summer heat, but they can get very crowded at peak times earlier in the morning and evening.

The Ghibli Museum isn’t just a straight train-ride though. You also need to grab the special Ghibli decorated bus. Tickets are fairly cheap, and are printed with a Ghibli design, making it worthwhile to keep. It goes nicely hand-in-hand with your ticket for the museum itself, which contains a small film cell reproduction from one of the studio’s films. Mine was a scene from Kiki’s Delivery Service. 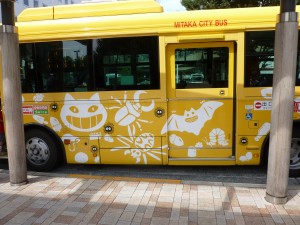 Inside the museum, you have three floors of Ghibli goodness. The main part of the first floor is taken over by display cabinets filled with models and figurines taken from every Ghibli movie (The Wind Rises had only just been released in cinemas at the time, so there was nothing from that film). Also on this floor is the museum theatre, which screens specially produced shorts at half hour intervals throughout the day. Note that you can only go in the theatre once per visit – an attendant will stamp your ticket on entry.

Upstairs is where things got more interesting. There are several rooms here, each of them filled with the original sketches, artwork and prints from the movies. Not all are represented, with the more popular of the recent batch of Ghibli films taking centre stage, however there was still a good amount of classic Ghibli content, and it was nice to see work present from the series of shorts based on the studio.

The third floor is mostly taken by a busy gift shop, which is filled to the brim with merchandise, including the remastered Blu-ray Disc releases, soundtracks, toys, trinkets and models. If you want something Ghibli, you’ll find it here. Not wanting to spend too much, particularly on the first day, I came away with a small Totoro plushie, which is a nice memento of the place.

Heading off down the right hand corridor to the stairs was the exit to the roof garden. At the top of a spiral staircase stood one of the statues from Castle in the Sky, and further exploration down a wooded trail led to one of the castle’s stone blocks. A nice touch, but we feel there could have been more up there. 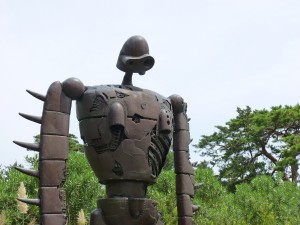 Statue of one of the robots from Castle in the Sky

Overall however, if you are into Studio Ghibli, the museum is a must-see if you are in the area. Just make sure to plan and book well in advance as it does get extremely busy.

Our next stop was Nakano Broadway. While Akihabara is the main geek hangout, Nakano offers plenty of opportunities for you to fangirl out.

The biggest destination here is Mandarake, the huge manga, light novel and merchandise mecca. The company have multiple stores focussing on each all down a single corridor of the centre. If you keep up with currently airing anime, you’ll notice that their manga and light novel representations are heavily promoted within the store. While I wasthere, there was an entire unit dedicated to Attack on Titan, which wasn’t a surprise going off its immense popularity.There’s also plenty if you’re into the seedier side of things. For male audiences there are three aisles of hentai manga, which includes the anthologies that many of the stories start out in. For the ladies or anyone who is interested, there’s also a sizable yaoi section. Be aware that if you are considering bringing items home from here, Japan’s pornography laws slightly differ from UK laws, so it’s wise to know what’s banned over here before making your purchase – you may have to leave it behind. 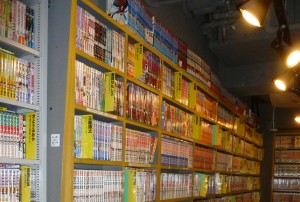 Inside one of the many outlets of Mandarake in Nakano Broadway

Nearby there’s Haruya, which is a newsagent type shop kind of like WH Smith. They sell a ton of Japanese magazines, manga comics and anthologies, as well as a wide variety of Japanese books. It’s worth a look if you’re interested. Elsewhere in Nakano you’ll find a variety of hobby stores, selling figures, models, trading cards and more. Needless to say, you’ll probably be spending quite a bit of money here, so once again plan before you go. We’d also advise devoting at least half a day here, as there’s a lot to see.

After dropping off our bags of items at the hotel in Shinjuku, we headed over the road to Squall for the welcoming dinner. The restaurant is a bar and grill affair, offering grilled meat and fish. In terms of décor and atmosphere it was a nice place; however the food options were rather limiting and didn’t seem as good as their western counterparts. If you’re in the area, try it if you like, but in terms of value for money you’re better off eating elsewhere. 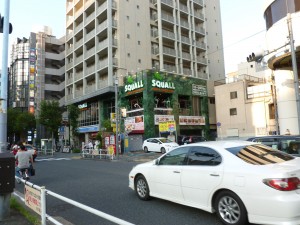 Afterwards we took a dodge into the two convenience stores pretty much right next door to both the restaurant and the hotel: Lawson and 7Eleven. Both have the same kinds of products at either the same or similar prices. A standard pack of Pocky will set you back ¥100 at either store, which was less than a pound at the time I was there. 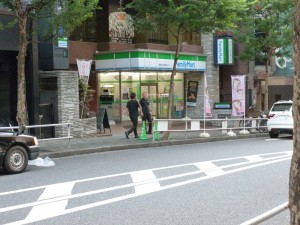 A Family Mart, just one of the many convenience stores in the area around the hotel

With Pocky in hand, it was time to check out some Japanese TV. If it’s anime you want, you’ll need to stick around until the early hours of the morning, with most of the popular stuff being shown between midnight at 3am. The majority is shown on Saturday and Sunday, but some is also shown throughout the rest of the week. Weekday mornings present you with a mixture of news, general entertainment and chat programmes, similar to here in the UK. What’s interesting with these is that the producers will always show the presenters when a filmed feature or interview takes place. It’s funny to see their reactions to different things, although most of the time there’ll just be sitting there blankly. Sunday mornings will usually feature kid’s anime, particularly on TV Asahi, with the likes of Precure. Sadly we didn’t catch any daytime or evening TV, but we weren’t there just to watch TV!

After catching some anime, it was time to call it a night. In the next part of the feature we’ll be covering day 2, including a visit to the Meiji Shrine, a long walk around Harajuku and a quick trip to Ikebukuro.