This summer, I had the pleasure of spending a week in Japan’s capital, where I got to see some of the key attractions that the city has to offer. In the third part of this feature it’s time for a visit to the Meiji Shrine, a walk around Harajuku and a quick look at Ikebukuro and Sunshine City.

The group visit to the Meiji Shrine was on the 18th August, a Sunday – which is arguably the best day to visit this particular area of Tokyo, as long as you can deal with the crowds. Sunday in Japan doesn’t have the same ‘day-off’ feeling as it does in the UK, with the country’s values being more grounded in Buddhism and Shinto. Therefore Sunday in the capital is a busy shopping day just like any other. The Meiji Shrine and Yoyogi Park at least offer some escape from the hustle and bustle, seeming off in their own little corner of Japan rather than being in the central metropolis.

The first thing you will notice as you enter the shrine grounds is the Torii gate. This first Torii at the Meiji Shrine is said to be one of the biggest in Japan. As you walk under it, note that you are generally meant to keep to the sides as it is said that the gods walk through the centre. It’s a respectful custom, but even a lot the Japanese don’t follow it, so you won’t be particularly frowned on if you go through the middle. 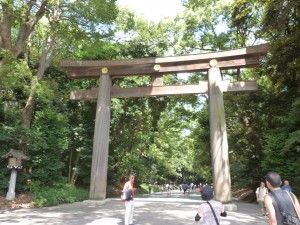 As you walk down the long path to the actual shrine, you’ll come across two interesting things. On the left you’ll find barrels of wine from Bourgogne, France. Emperor Meiji was keen to combine Japanese traditions and Western values, so he took to embracing aspects of Western culture in his personal life, such as wearing Western clothing, eating Western food, and drinking wine. 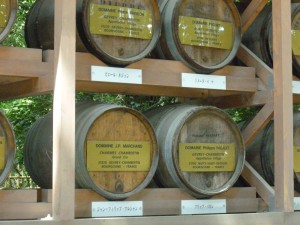 On the right hand side, opposite the racks of wine, are barrels of sake wrapped in straw. These barrels are offerings to Emperor Meiji and Empress Shoken by the Meiji Jingu Nationwide Sake Brewers Association, as well as other sake brewers from all over Japan. 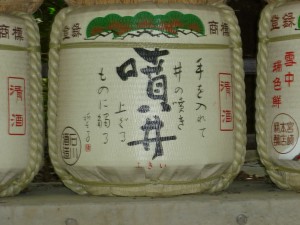 A barrel of sake

Continuing down the path leads to the main shrine itself, which has an interesting history. After Emperor Meiji’s death in 1912, the Japanese government passed a resolution to honour his role in the Meiji Restoration. Work was started in 1915, and the shrine completed in 1921, with its grounds completed in 1926. However, it didn’t last long, as it was destroyed during World War II. After the war, the Japanese people took up a fundraising effort to rebuild the shrine, and it was fully restored in 1958. This restoration is the current shrine as it stands today.

Outside of the shrine is the purification area, where you need to purify yourself before you can enter the main shrine complex. It’s a rather simple process: take up a ladle and fill it with water. You then wash your left hand, then right hand. If you want you can also rinse out your mouth, but don’t put the ladle up to your mouth. Instead cup your hand, pour water into your hand, and then rinse your mouth. The water is perfectly clean, so there’s no need to worry about picking up anything nasty. To keep it that way, make sure all waste water goes in the drain trough at the side of the pool – don’t let any water you’ve used re-enter the main pool. 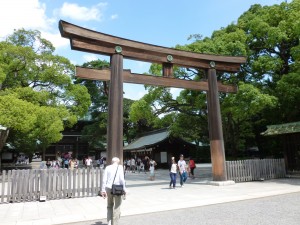 Entrance to the main shrine grounds

After purifying yourself, the main shrine complex beckons. Straight ahead past the two sculpted trees is the main shrine building. This is where you can offer money and pray to the gods. It’s customary to use a 5 yen coin, as they are thought to establish a connection with the deities of the shrine. To pray, you must bow twice, clap twice, and then make your prayers. When done, bow once, then back away. Note that it’s thought of as rude to turn your back after prayer, and photographs are not allowed of the area from the base of the steps upwards. It’s perfectly fine to photograph the shrine as a whole from a distance though. 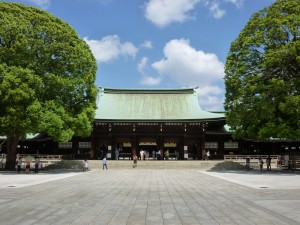 On the left there’s a building which acts as a reception area when the shrine hosts events, such as traditional weddings and coming of age events.

When done, take the path out of this area to head back to the main entrance to the grounds. At this point you can go right and around the corner to explore Yoyogi Park, or you can cross the road over the footbridge to explore Harajuku.

Harajuku is known for being one of Tokyo’s fashion capitals, and it sure has plenty to go around. First though, it’s worth taking a trip down Omotesando Dōri. There are plenty of shops and cafés down this long road, and one port of call you should make is to Kiddyland. Yes it sounds a bit wrong but is one of Tokyo’s biggest toy stores. There are four floors and a basement to explore which hold a large selection of toys for girls, toys for boys and other things, and has some interesting themed sections. Into girl’s anime? The third floor has a nice selection of toys from the Precure and Aikatsu franchises. Like Hello Kitty? There’s a whole store dedicated to it on the top floor. And the basement? A whole floor dedicated to Charlie Brown and Snoopy. As I mentioned previously, Asian markets seem to have an obsession with classic western children’s franchises. If you were born before 1995/96 there’s tons of nostalgia here. 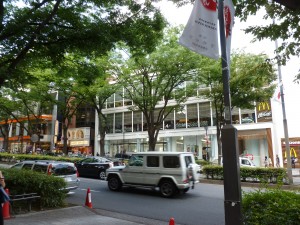 Further down Omotesando Dōri, you’ll find Omotesando Hills, a small shopping centre/mall with a nice selection of different stores, and a few restaurants and cafés. I don’t know if this is employed elsewhere in Japan, but shopping centres and malls in Tokyo tend to be called ‘Hills’ or ‘City’, as their size and scope make them into essentially what would be a town or city.

Heading back up to the Meiji Shrine end of the road, you’ll find La Foret on the corner of the junction. La Foret is a department store in the same vain as Lumine Est. and 109. This is of a particular interest to both fashion and music lovers, as it contains an outlet of Jouetie, the fashion brand designed and produced by model and J-Pop duo Amiaya.

From Laforet, the next big destination is Takeshita Dōri, which you can get to by returning to the main road that contains Harajuku Station. Walking on the side of the street opposite the station, walk down in the opposite direction to the shrine until you get to the convenient English sign ‘Takeshita Street’. Takeshita Dōri is a fashion mecca and has some well-known Japanese brands, such as Liz Lisa, SeX POT ReVeNGe, and the Gothic Lolita chain Body Line. Most of the street caters for women, but there are a few places selling men’s fashion as well. The side streets around Takeshita Dōri are worth exploring, especially for anime fans: hidden neatly away is the official Evangelion store. The bottom floor deals mostly with clothing, while there’s a greater selection of merchandise upstairs. If you buy something, you’ll get a chance at the gift ball machine (the ones where you turn the handle and a coloured ball will come out). There are also some cool alternative shops and second hand music stores around the back that are worth checking out.

Guide maps are available at either end of the street, which helpfully include a sizing conversion guide for tourists. For women, Japan uses odd numbers, unlike the UK’s even sizes, so add one to your usual size and you should be fine. Men’s are labelled in the same way as the UK, but it may be worth considering getting the next size up to what you usually get, as Japanese people are typically smaller than westerners.

If you want to take a breather from the madness, Yoyogi Park is probably the place to do it. It’s a very large open public space, with grassy areas, forested areas, large open tarmacked areas, flower gardens, ponds, lakes and fountains. You’ll see a large host of people here doing all sorts of things, from relaxing to exercising. It’s generally peaceful and quiet and a vast contrast to the hustle and bustle of the main city. 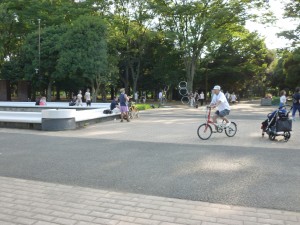 Sunshine City is a shopping centre located in the Sunshine 60 building in Ikebukuro. Like other shopping centres it has a variety of shops and facilities, including a sports club owned by Konami and two places that anime fans should apparently see: Bandai Namco’s Namja Town, and Jump World (based on Shonen Jump franchises), the former holding the Gyōza Emporium. This is where the group headed on the night after Harujuku. 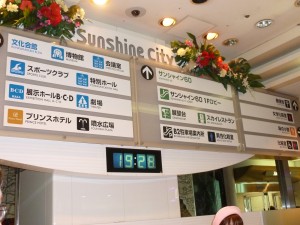 Sadly, while being hyped up previously in other publications and by the tour guide, Namja Town was a huge disappointment. It’s a dark, dingy run-down kid’s theme park with a few stalls selling gyōza (Japanese dumplings). While they were nice, they were a little expensive and overall not worth the money. There was also an ice cream shop and a cake shop, but I passed these up with other members of the group to make a hasty exit back to the hotel. Jump World had mixed reviews from those that went. It was the same kind of thing as Namja Town in that it was a kid’s theme park, but it had some interactive games that didn’t sound too bad. 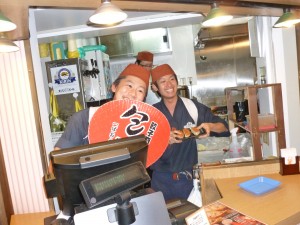 Staff at a stall in the gyōza emporium

Overall if you’re considering going to Sunshine City, just go for the fact that the building was featured in ‘Durarara!!‘. Other than that the best advice is to avoid it.

In part 4 I’ll be checking out Tokyo Tower, Sensōji and taking a river cruise down to the Hamarikyu Gardens.