This summer, I had the pleasure of spending a week in Japan’s capital, where I got to see some of the key attractions that the city has to offer. The third day was a busy one, and there was quite a few different places that I visited, so it’s split over two parts.

This part of the feature will take you from Tokyo Tower all the way down the Sumida River to the Hamarikyu Gardens.

Under the sweltering morning heat, the group made its way to the Tokyo Tower, the second tallest structure in Japan and 22nd tallest in the world. While Tokyo’s first major communications tower has now for the most part been replaced by the Skytree, it still remains a popular tourist attraction and observation tower. 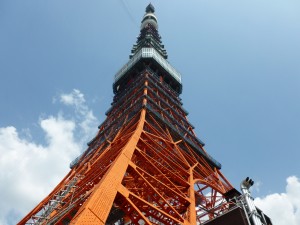 The 333m tower has two observation decks, a ‘main’ deck and a ‘special’ deck, the latter of which costs extra to visit. The main observation deck is good enough, as it gives superb views of the city, and allows you to spot things that you would not have necessarily gone to. It’s not hard to miss the TV Tokyo building with its iconic logo, for example. If you’re not afraid of heights, there’s also a floor panel you can look through to check out how high you are. It does look high, but it doesn’t look as impressive as you would think, as the majority of the view is blocked by the structure itself.

When you’re done scoping out the views, head downstairs to foot town, which plays host to gift shops, restaurants, fast food places and exhibition space. At the time I was there, a Doraemon exhibition was being held there, which did look pretty interesting. On the ground floor there’s also an aquarium, next to which we managed to bump into the Tokyo Tower mascot. Needless to say, hilarity ensued.

If you’re in Tokyo for a short amount of time, it’s most likely going to be a toss-up between the Skytree and Tokyo Tower for viewing the city. While I never had time to visit the Skytree, Tokyo Tower is a good experience that you won’t regret if you head for it.

From Tokyo Tower, the group made its way to Asakusa to pay a visit to Sensōji, Tokyo’s main Buddhist temple. The temple was founded in 645AD after a peculiar series of events, which are illustrated in framed traditional wood block prints on the approach to the main temple grounds. Two brothers were fishing in the Sumida River when they pulled up a statue of the bodhisattva Kannon. Thinking it was rubbish the brothers threw the statue back in the river, only for them to pull it up again, and again, and again. Thinking something heavenly was at work, the showed it to the village chief who recognised it and enshrined it.

The entrance to the outer temple grounds and Nakamise-dōri is framed by the Kaminarimon, or Thunder Gate. The street beyond is filled with shops and stalls selling gifts, ice cream, traditional rice crackers and other trinkets. It’s a nice place for gift shopping, as a lot of the items here carry traditional Japanese imagery and feel. 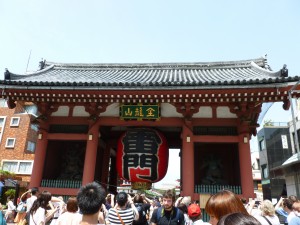 Continuing down this long street leads you to another gate and the main temple grounds. The Buddhist pagoda architectural style is very prominent with a range of buildings with their distinctive ornate red/white bodies and elegantly sloping roofs. Stalls frame the main path to the main temple on the left and right, while an incense burner stands smoking away in the middle. A purification area stands at the end on the right hand side which you can use if you wish. 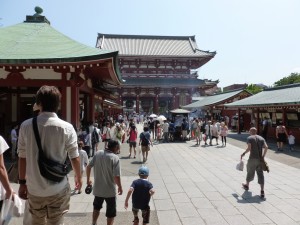 Unlike the Meiji Shrine, the covered area of the main temple goes in much deeper, and hosts a small gift shop and fortune area, as well as the main prayer area. Taking a fortune is different again, as this time you drop some money into a box and then take a stick from the tumbler. This stick will tell you which drawer you take a fortune from. You can keep the fortune, or tie it on the rack to the side.

It’s a place that feels a lot grander than the Meiji Shrine, and worth a visit to both to be able to contrast the two.

From the Kaminarimon facing out to the main road, head left towards the river for the Asakusa ferry stop. It’s stationed directly opposite the Asahi Brewery buildings, one of which is infamously known as the golden turd building, due to the appearance of what was supposed to be a drop of beer falling into a glass. 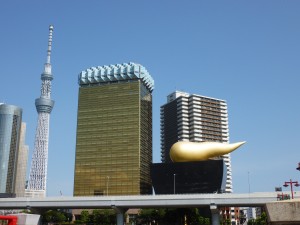 The ferry takes you downstream towards the Tokyo Port area of Tokyo Bay, which offers some splendid views as the river opens up into its mouth. The ultimate destination however is the Hamarikyu Gardens on the riverside. 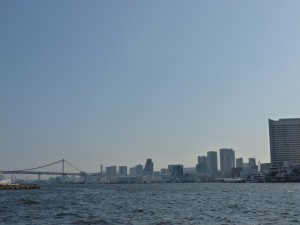 The gardens were the family gardens of the Tokugawa shogunate and were first built as a residence on reclaimed land in 1654. The gardens were built up after the land became the property of Tokugawa Ienobu and were finished by the time of the 11th Tokugawa shogun, Ienari. Similar to the Meiji Shrine, it was bombed and destroyed during World War II, but it was restored after the war and opened to the public in 1946. 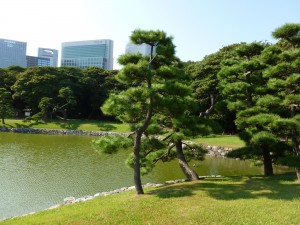 It’s a rather pleasant place just to wander around, and has some interesting things to find, such as a duck memorial, paying respects to the souls of a vast number of ducks that used to be hunted here, as well as a traditional style tea house. 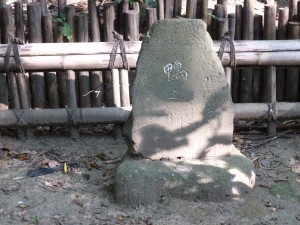 The Hamarikyu Gardens is another place where you can escape from the manic Tokyo lifestyle. If I lived there I would imagine I would spend a good amount of time wandering around, as that’s something I like to do.

Before long, however, it’s time to return to the city and jump on the Battle Subway. Next stop: Pokémon Center Tokyo.