In summer 2013, I had the pleasure of spending a week in Japan’s capital, where I got to see some of the key attractions that the city has to offer.

Around the Hamrikyu Gardens area there are a couple of key attractions in the area, namely Tokyo’s Pokémon Center and the giant Ghibli clock. If the tour guide hadn’t pointed out the latter, I would have missed out on it, as it’s a little out of the way being placed near the NTV studios in Shiodome. It’s a steampunk piece that takes cues from a variety of structures and elements from various Ghibli films and animates at certain intervals. It’s certainly worth a look if you’re in the area – just be sure to find out when the animatronics start up and be around for one of those times. 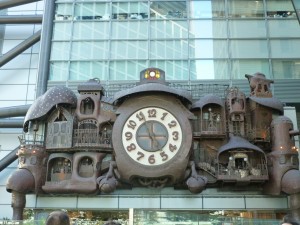 The clock however is a mere stopgap from the real excitement – Pokémon Center Tokyo. While sadly it doesn’t have Nurse Joy to heal up your beaten monsters, it does have Pokémon merchandise by the sack load. Although the store was heavily promoting X & Y and accepting pre-orders, this isn’t the place to go for the multimedia side of the franchise. Instead, mark this location for all your plushie, toy and trading card needs. As it hadn’t been too long since the release of the Genesect movie, a lot of the merchandise available was geared towards that, particularly with the plushies for the Eevee chain. If Team Rocket captured Eeveelutions and sold them in a shop, this is what it would look like: an entire wall of the cutest and beastiest stuffed fluff. Sylveon was of course the main feature, but you could pick up a plushie of your favourite one in two sizes. I myself purchased a large of the gorgeous Espeon (my personal favourite), along with a little Mudkip and some of the Japanese trading cards. This all took place under giant floating models of Reshiram and Zekrom – and I wonder if they’ve since been replaced by Xerneas and Yveltal. 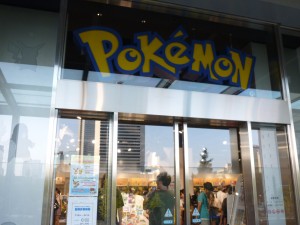 If you are a Pokémon fan, this is one destination that you really shouldn’t miss. And talking about missing things, you may idly pass up on the Pikachu, Piplup and Charmander displayed on the front window of the shop – however, there’s an interesting story here. Each Pokémon Center chooses three Pokémon to act as the store’s mascots. So Tokyo has Pikachu, Piplup and Charmander, Osaka has Meowth and Tepig, Nagoya has Chimchar and Chikorita, and so on.

Before heading out, if you have a 3DS with you and the games, it’s worthwhile checking for any event distributions happening in-store. These are usually exclusive to Japanese Pokémon Centers, so you may be able to get something that the majority of western players won’t have.

Returning to the hotel with two other members of the group, we encountered another two members of the group jumping out of a taxi. The two guys had evidently got lost on their way back from the Pokémon Center, having gone in the completely wrong direction. So while I never used a taxi myself, you can just hop in one if you do get lost. It’s probably a good idea if you keep your hotel’s address on you – the Tokoko Inn that we stopped at had cards for all of the branches of the hotel chain in Tokyo in the main entrance, which is certainly helpful. I’m not sure if other hotels do that, but I’d say a slip of paper would suffice.

From there we decided to get something to eat together, so the six of us headed to a ramen bar not too far from the hotel. It was a small arrangement, with the bar coming across the front door and heading down into the building, but seemed to have plenty of space for a good number of occupants. The staff inside were very welcoming and happy to have us there and get our yen. The pork ramen that they delivered was great – if you’ve had ramen at an English establishment such as Yo Sushi or Wagamama, you can instantly taste the difference. (I had some ramen at Wagamama on returning to Heathrow and it was relatively tasteless in comparison.) Certainly, these guys knew how to make good ramen. The place is near the building with the white striped windows that is home to a Family Mart down a side street as you come up from the Kabukicho Toyoko Inn, however if you pop in be aware that they don’t cater for vegetarians.

From there we went to exploring Shinjuku a little, first heading to a manga café on the way up to the station. Manga cafes are a bit like internet cafes, but offer the browsing and reading of manga and/or internet usage for timed fees. Sadly in this establishment, the staff knew know English and there were a variety of different options for what you could do, so we decided to leave. There are manga cafes out there that are more tourist friendly; it’s just a matter of finding the right ones.

After a short wander, we ended up in Shinjuku’s branch of Animate. This anime, manga and merchandise chain has stores all across Japan, with sixteen covering the various wards of Tokyo. Like most Animate stores, there’s several floors, each holding a specific set of items. All of the latest and most popular manga could be found on the first floor (or ground if you prefer), and going up held more adult, late-night-anime kid of things, or other genres. At the top were the music store and the cosplay section, while the very bottom floor held the trading card store and playing area. The latter seems to be typical of this kind of store in Japan. Locating your local Animate is a thing that you should probably do, as it gives you a lot of the stuff that is available in Akihabara, and allows you to pick up anything you may have missed before you head home. 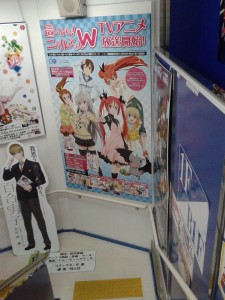 Of course, any trip to a local Animate is just a prelude to the mecca of madness that is Akihabara, and the ‘Electric Town’ is one of our next destinations. In the next part of the feature, I’ll be heading round and telling you where some of the main focal points are, after a rare chance to see inside one of Japan’s top anime studios: J.C. Staff.