From Studio Trigger and the minds behind Gurren Lagann comes a hot-blooded tale of revenge, hurricane force action and glorious nudity. This, is Kill la Kill.

Matoi Ryuuko’s father has been brutally murdered, leaving her with only one half of a pair of gigantic scissors and a sentient, vampiric school uniform going by the name of Senketsu. After setting out to seek vengeance on her father’s killer, Ryuuko ends up at Honnouji Academy, ruled by the iron fists of student council president Kiryuin Satsuki and the might of her ‘elite four’ – her handpicked and faithful school council subordinates. Seemingly taking an instant dislike to each other, Ryuuko and Satsuki strike up an intense rivalry, as the town’s overlord pits her against the school’s club presidents. If Ryuuko wants answers, she’s going to have to rise to the top to get them. 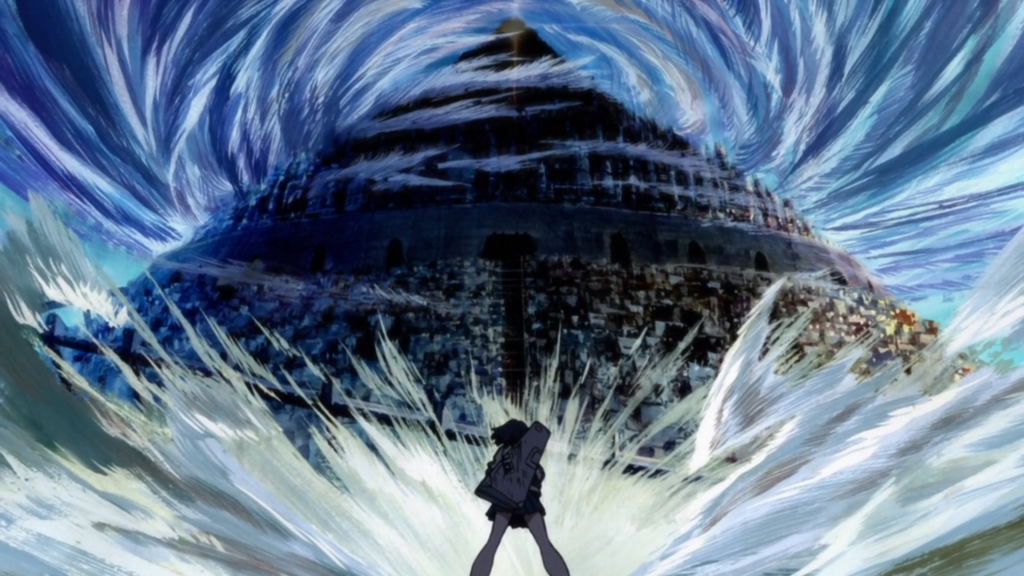 You’d be forgiven for passing this up, as the appeal of Kill la Kill lies not in its plot, but in its sheer sense of style. It borrows its influences heavily from the production’s staff’s previous outings, and simply would not have worked otherwise with its approach to its content. While being outrageously violent and involving a lot of nudity, it manages to stray away from the common focus of seeing breasts just for breasts sake and instead pokes fun at the whole thing, and says, “You know what, this is how it’s done.” It’s like proper nude art – you don’t look at it to get off on it, you look at it because the human body is actually beautiful; and Kill la Kill really has to be commended for that approach.

Admittedly, unless it is love at first sight, Kill la Kill can be hard to stick out with due to its initial formulaic boss-of-the-week manner. However, it’s the ridiculous characters that capture your heart and don’t let go, particularly when it comes to the back-alley doctors of the Mankanshoku family. Acting as Ryuuko’s foster family after she arrives in the slums surrounding the giant fortress of a school, they become an irreplaceable part of the show as they turn the most distressing situation on its head with their idiocy and charm. The Mankanshoku’s daughter Mako provides the perfect other half of the Ryuuko-Mako duo, offering silliness and lightheartedness to Ryuuko’s seriousness and aggression. It’s the classic comic relief element, but as the series develops Mako becomes more than that as she proves to be a capable fighter on her own. 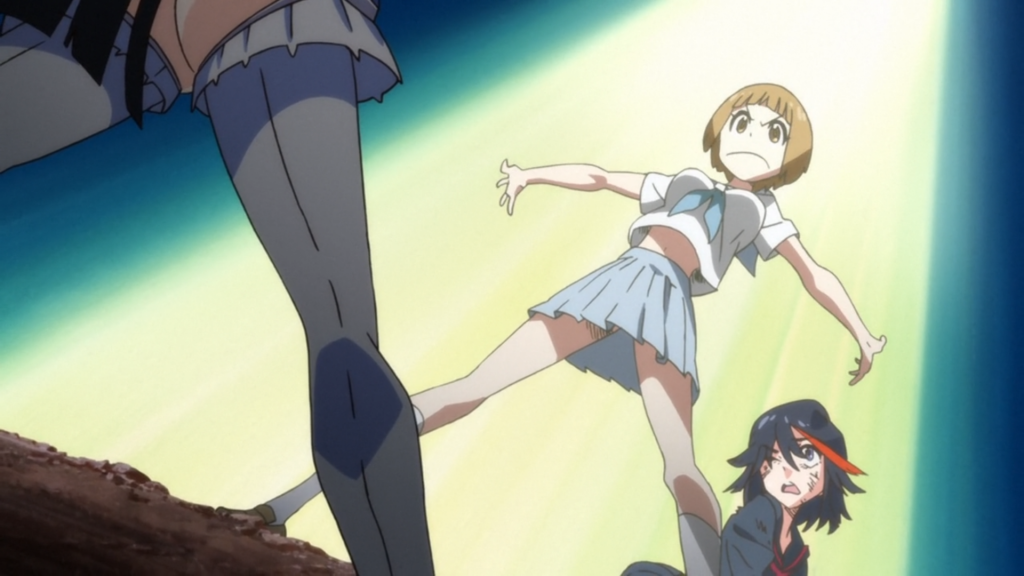 Studio Trigger is made up of a lot of respectable talent, and the animation quality is of a standard fit to that calibre, taking a more cartoony, distinctive visual style. Bold is probably the word that describes it best, with its huge red title cards and a sketchy, heated feel for battle scenes. If anything, anime styled in this way appears visually better than the giant-eyed cutesy stuff that fills the majority of TV station schedules these days.

Enemy design is very imaginative, as we see Ryuuko go against aforementioned club presidents, each of which have a particular star uniform that grants them superpowers related to their club. While you do know that our heroine is going to win, the different powers mix in some variety and allow for some very entertaining fights.

Such things are only scratching the surface of Kill la Kill, as underneath there’s a more deadly plot going on that you may or may not realise depending on how deeply you watch your anime. We’re introduced fairly early on to an organisation known as Nudist Beach, where an assassin enters the fray to kill Ryuuko. The sequence raises a lot of questions, as suspicions start to be pinned down on Ryuuko’s homeroom teacher; and we have to wait until the second half for those questions to be answered. Yes, we do find out who killed Ryuuko’s father, and yes, we do find out why, but it takes a little while for the formulaic episodes to come to their revealing climax and reward us for our patience.

From the halfway mark the pace becomes rapid, as Satsuki embarks on a war to conquer the remaining schools in Japan and our main villain, Kiryuin Ragyou, who had largely remained in the shadows until now, comes into the foreground and puts her plans into action. 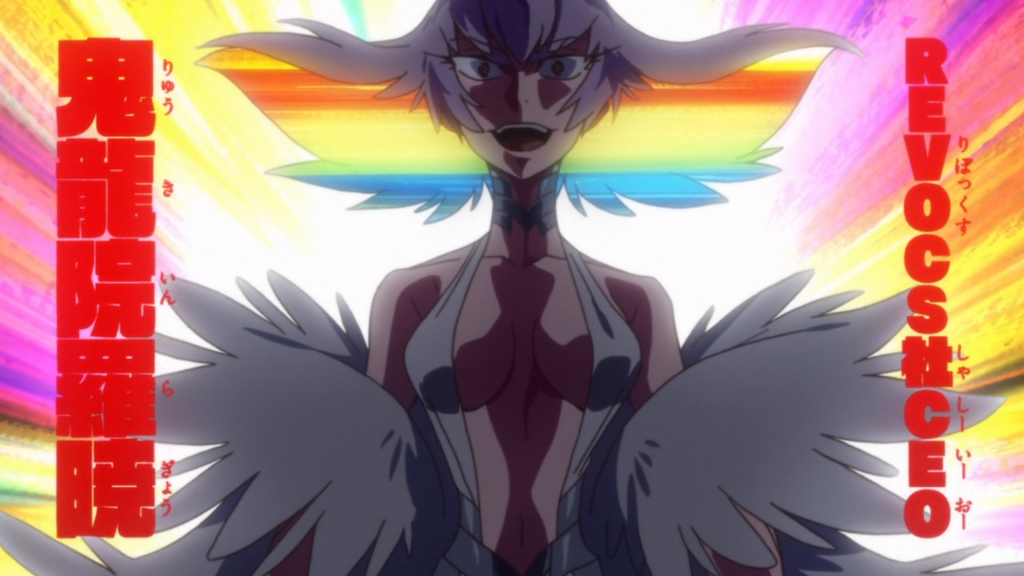 Ragyou takes a clear femme fetale role as CEO of the clothing empire Revocs Corporation, a cover for the evil organisation COVERS who are using aliens known as Life Fibres to make clothes and seemingly conquer the world. She’s a very strong and memorable character that reflects positively on everything else as she shows that the main cast aren’t the invincible lot you see in other shows, but are defeated time and again before finally rising to the top.

The legendary Romi Park steps up for voice acting credit, and it’s impossible to think of anyone else giving Ragyou the same brutal atmosphere. Pitch and delivery ensure you know this is one crazy lady set on blowing everything up, just because she can. Her theme music also helps to make an impact, part of a superb soundtrack by the ever-improving Sawano Hiroyuki. The music deepens the enjoyment of the show as it accurately plays on the emotions you should be feeling during specific scenes while also reflecting the emotions of the characters. You’ve got madness for Ragyou, hope and glory for Ryuuko and an epic feel when it comes to the battle scenes.

As we roll on through the second half, plot threads unravel quickly but Kill la Kill keeps following a revelation with a new surprise twist that will often leave your mouth agape. It’s the feeling of not knowing what is going to happen next that keeps you on your toes and keeps pulling you back week by week for the next episode.

As it all comes to an end with a stakes raised final battle, you can’t help but feel satisfied at the way Kill la Kill has developed from its initial few minutes to this intense confrontation. All the ends are tied neatly, providing the answers desperately sought to the many questions that are raised, and we see the cast at their strongest, giving it their all. The staff at Studio Trigger appear to have that same give it your all mentality and have produced an anime that drags your eyes towards them and makes you wonder just what they are capable of if they keep going at this rate.

It’s certainly the right beginning for the studio, with a television anime that bombards you with action, nudity and style. Kill la Kill is immensely fun and entertaining, and if all that hasn’t encouraged you to give it a go, who knows what will?