Niche, Japanese mobile games are practically unheard of in the UK, so it was a surprise when this free-to-play/freemium title, based on the popular Love Live! School Idol Project anime was released in the west on iOS and Android devices. It’s a quaint little rhythm game set to tracks from the series’ central school idol group, μ’s; with elements of the idol management and card game genres mixed in. 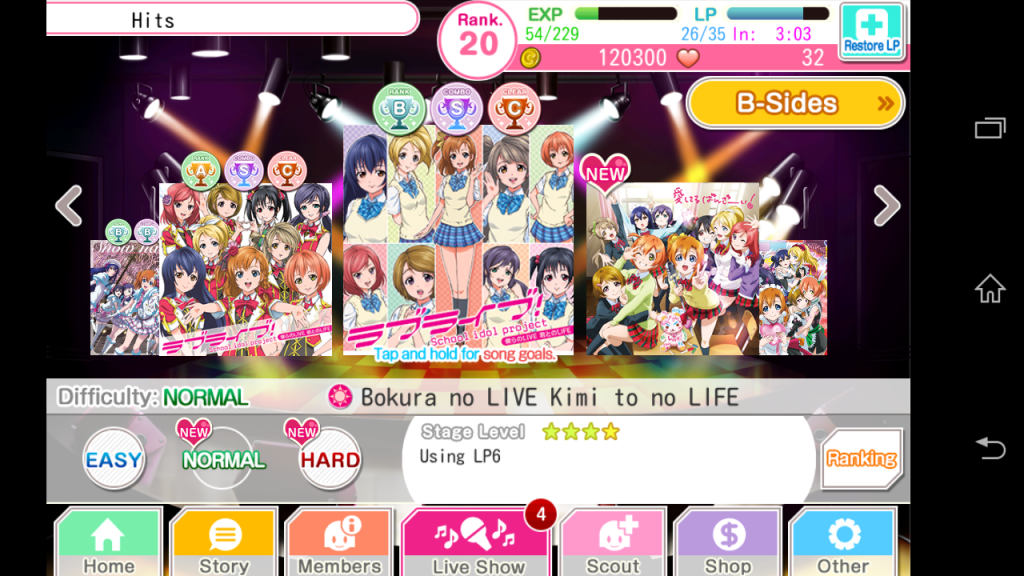 In the game’s lightweight and rather superficial story, you’re tasked with managing μ’s, assisting the group with their practices and live shows, the two central parts of the game. The former focusses on idol management, while the latter has you tapping along to some of the idol group’s most popular tracks.

The idol management side is an effort to inject some strategy; and while skill at rhythm games is important, the make-up of your idol group takes the edge off a little. You can have up to five individual teams, or units, as they’re called in the industry, each comprising of up to nine idol cards, which are split into three attributes: smile, cool and pure. These attributes are tied into songs through an affinity, and having a greater overall attribute will boost your score significantly in the rhythm game sections. There’s a limit to how many idol cards you can manage, but this steadily increases with progress to create room to have enough idols to jostle around your teams. 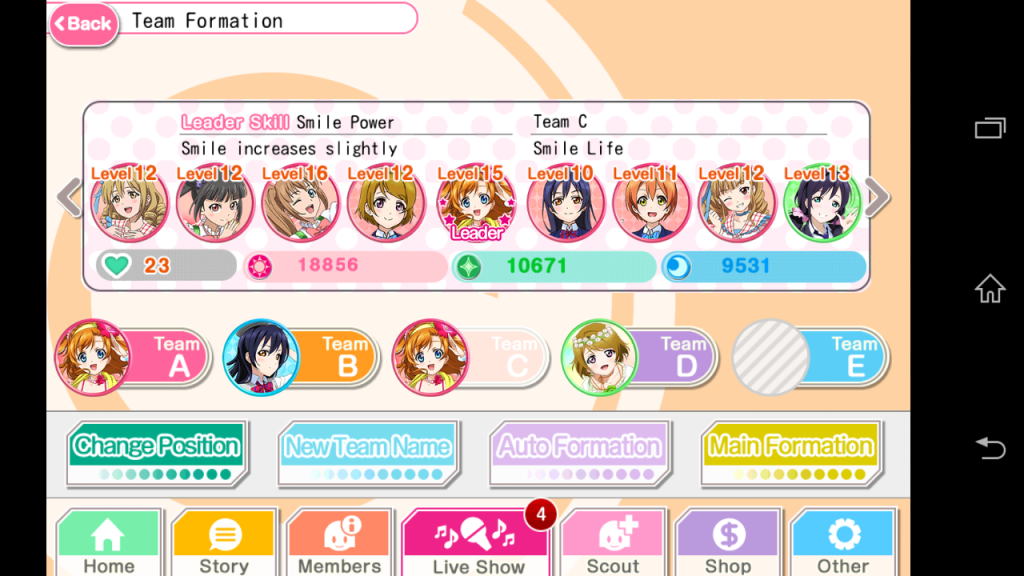 There are a large variety of idol cards to collect, with a roster that comprises of not just the central characters from the Love Live! anime, but also specially created students for you to play around with. If you’re dead set on reuniting your favourite characters, you can, but the likes of Honoka, Umi, Hanayo, Rin and Nico are rarer finds than the new, more common characters and are mostly locked behind one of the in-game currencies, which for some may seem unfair and restricting.

The visual style and the character designs stay true to the overall style of the series, but costumes are lazily re-used for the levelled up, idolised versions of the common idols. The technique for creating these is idolisation, where you merge two of the same character cards into one in special practice mode. This can only be done once per character card, but offers a greater level cap and increased stats, the latter of which is also offered by standard practice, in which you can level up an idol at any time using your current collection of cards. While you’ll probably be itching to get at the songs, it’s worth playing around with your units if you want to get to the top of the leaderboards, and more importantly maximise bonds with your characters; a stat which increases through playing songs and unlocks bonus story mode chapters that offer you valuable in-game currency.

The story mode is the weakest part of the game, with chapters that are extremely short and have no plot of any real interest to the player. While fully voiced by the anime cast, it bears no relation to the TV series and is a waste of their terrific talent as you hurriedly tap the screen to get to your next objective, whether that is upping your current overall in-game rank, or completing a brand new song.

The rhythm game section is where School Idol Festival really shines, with a good approach to representing a music game on a mobile device. There are only so many ways to design a rhythm game, and despite not having the buttons of more popular big-budget titles, it’s actually pretty fun with a good selection of tracks, although unlike in the bigger titles, unlocking new songs can feel a bit of a chore as you’re forced to repeat the ones you have in order to level up to meet the requirements to advance in the story. Your idols are represented by circular icons laid out in a semi-circle, which you tap or hold down as the circular notes traverse outwards from the upper centre. While most rhythm game players will find this standard stuff, the harder difficulties can become particularly frantic as your overall skill determines success or failure. Missing notes will deplete your numerically based stamina bar, but the game will help you out with more powerful characters offering more stamina or skills to restore it during play.

Of course, this being a free-to-play, or for the better term, freemium game, it all comes with a catch. The number of songs you can play in one go is limited by the number of Love Points (LP) that you have, and each song costs a certain amount of LP to play. Once it’s all gone, you have to wait for your LP to recharge before you can play again. Levelling up your overall rank also restores your LP, which makes it easier to play at the beginning of the game as you level up quickly and thus allowing you to play more songs, but becomes more restrictive the higher your rank.

There are also three in-game currencies: gold, friend points and Love Gems, all of which are directed at restricting how much you can do in one sitting. Gold is required in the practice modes to level up and idolise your idols; friend points are used for scouting regular characters; and Love Gems can be used to scout for an honour student (guaranteeing a card that is of rare or greater rarity) or to refill your stamina bar after you have failed a song. All of these can be earned in various ways, from completing songs, finishing story chapters and a free daily login bonus; but are directly dependant on you playing the rhythm game and using up your LP. 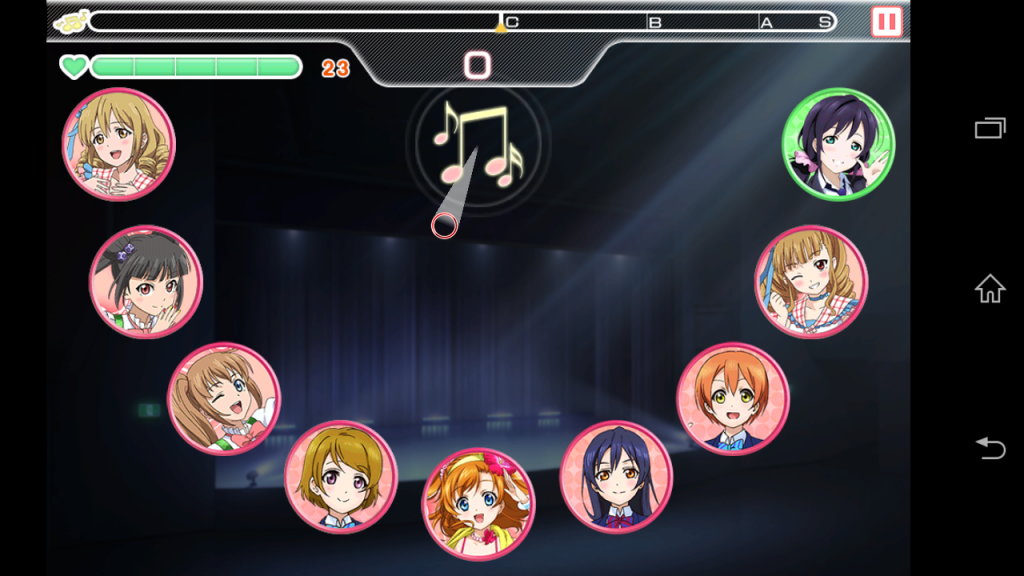 Realistically, if you’re playing the game for ten to twenty minutes at a time and spending your resources wisely you are unlikely to run out of them, but there’s always a present temptation to buy with real cash, whether it is to stock up on rare cards or refilling your LP or stamina to play for longer. How these limitations affect you depends on your playing style. If you want to play it in the same vein as say, Hatsune Miku: Project Diva, then you’re going to need to shell out on those Love Gems; but if you’re a more casual player and can deal with waiting around for your LP to regenerate, it’s perfectly playable as a free game, although you may not be seeing your name at the top of the leaderboards on skill alone.

Despite the negativity attached to its free-to-play/freemium format, Love Live! School Idol Festival is actually a pretty good game. The rhythm game is accessible to players of all skill levels and is well thought out with a good selection of tracks taken directly from the anime; while the idol management with its card system offers a surprising amount of depth with a collect-them-all hook that’ll have you frantically spending you hard earned in-game currency. It’s just a shame that no effort has been put into the story mode and that its pay-to-win nature negatively skews the fun of advancing in the leaderboards. If this had had more investment and was available to buy, it would have accelerated to being one of the best anime-inspired games on the mobile market; but instead the ever-popular free-to-play pricing model hurts the game’s quality and playability.