For schoolgirl Nanana, there’s nothing better than the thrill of adventure; venturing out into the unknown in the vein of tomb raiding legend Lara Croft, exploring ominous caves filled with elaborate traps that guard treasures with mystical powers. As part of the ‘Great Seven’, said to be the greatest adventurers in the world, she amassed a collection of these artefacts which came to be known as Nanana’s Collection – a prize that many want to hold in their grasp, by whatever means necessary. As a result, Nanana ends up being murdered in her own home on Nanae Island, the place she helped found for talented youngsters.

Ten years later, Juugo Yama leaves his oppressive family home behind and moves into Nanana’s old apartment, which seems perfect with its exceptionally low rent. There’s always a catch though, as the room already has an occupant: Nanana’s ghost. The young adventurer is bound to the room and haunted by the unknown identity of her killer, spending most of her time playing videogames (many of which you will recognise!) and putting away bucket-fulls of pudding while the other occupant of the room does the legwork in unravelling the mystery of Nanana’s death. This task now falls to Juugo, who enlists in his new school’s Adventure Club in order to hunt down pieces of Nanana’s Collection to help in the search for the killer. 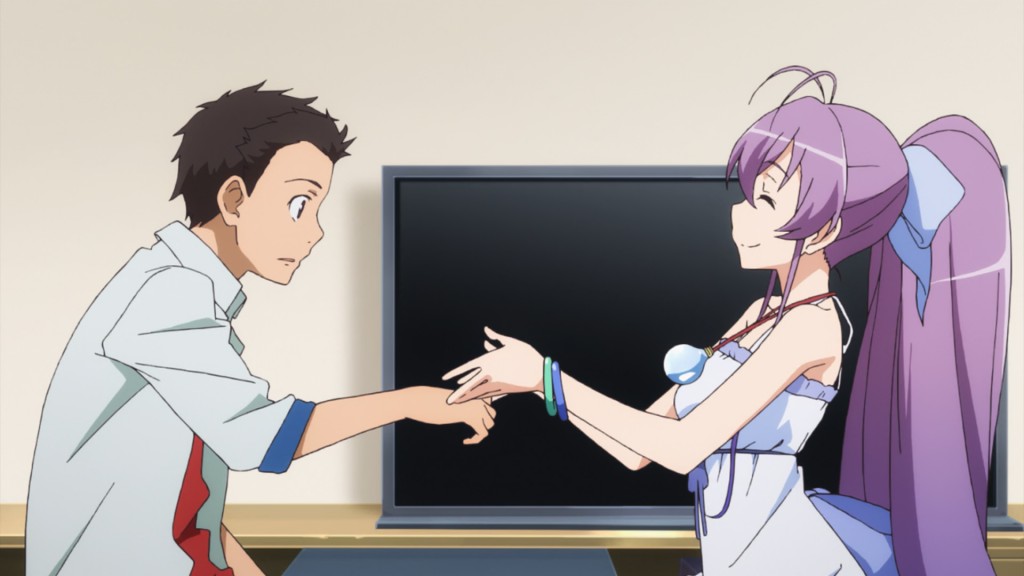 This high-strung tale of puzzle solving and dark machinations for power comes from the light novel series by Kazuma Ōtorino, and is a small taste of the overall action designed to whet your appetite to get into the main series. While it has typical elements such as an (initially) bland, male lead; a slight harem factor and some fanservicey hijinks, it’s both the intertwining mysteries and sense of adventure that make Nanana’s Buried Treasure so enthralling. There are a lot of different factions in play, with the series employing smoke and mirrors in order to mask Nanana’s killer – and with the scope of her fame it literally could be anybody.

With that in mind there is a need to be untrusting, and while on the outside the Adventure Club may appear to be chummy, when it gets to treasure hunting it’s everyone for themselves. The fabled ruins containing the treasure are surprisingly hidden in the most mundane and missable of places, such as a locked door in a corridor. Inside, the focus is primarily on platforming and movement, finding the quickest path to the treasure while avoiding traps such as death-inviting spikes and a pool of boiling water. It’s nothing particularly innovative, but the competition between the hunters is fierce, as Juugo needs to pool all his resources into letting his opponents make the mistakes. These highly entertaining sequences don’t fall into the trap of protagonist empowerment either, as Juugo is hardly ever the one to claim the treasure, his own plan of letting the others doing the work often backfiring. 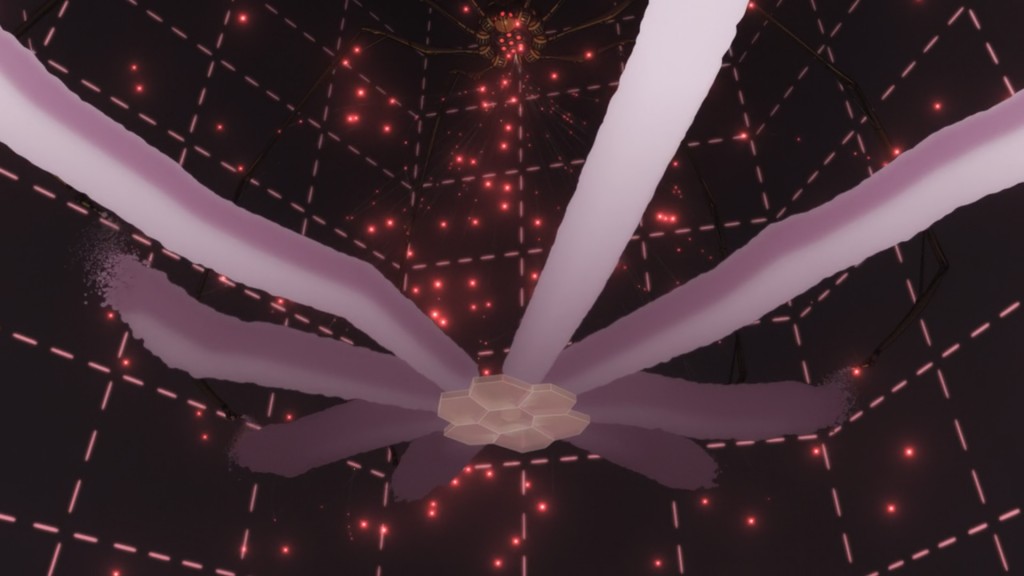 He’s quite a resourceful character, and is a rather strong lead once his generic feel is parted with amid revelations about his motivations for leaving home and uncovering Nanana’s Collection. It’s sadly rare these days to see teenage male leads with a depth beyond going for the nearest thing with breasts, and in that regard these particular developments are very much welcome – Juugo isn’t the hero that Nanana may be looking for, as you’re first made to believe.

Within the cast he gets a rival in the form of Tensai Ikkyū, a self-styled master detective who totes around cross-dressing maid Daruku Hoshino as her faithful assistant. While she has a love for mysteries and is intelligent and intuitive, the pair can sometimes come off as a little too cute, and while humorous, the cross-dressing element is unneeded fanservice. While you could call her eccentric, Tensai’s character is a positive addition in the way she’s not afraid to throw herself around into some dangerous situations, in which her skill at bluffing comes as a surprising blessing.

Her motives for searching for Nanana’s Collection are unclear like the majority of the cast, and through this there is no clear antagonist of the series until the latter episodes. The majority of the cast that Juugo goes up against is more motivated by the human weaknesses of greed, temptation and power, rather than truly evil intentions. Until the bad guy makes his entrance this approach lowers the overall risk involved, as no one is wishing for the untimely demise of the other, despite some intense tension. Still, the series offers a good range of characters to keep the story moving.

The plot appears quite episodic at times, but with some threads and central sequences being drawn throughout. The focus is fundamentally more on building up the characters than driving the plot forward, which the series does particularly well, but disappoints those seeking answers to the central mystery of Nanana’s death. The matter is infrequently touched upon as a result of the inherent problem with many light novel adaptations in that the source material is still ongoing, and a driving force between the two is attracting more sales. Sadly in terms of the anime this leaves the series feeling unfinished, which will frustrate casual viewers who are unlikely to transition to the source material. 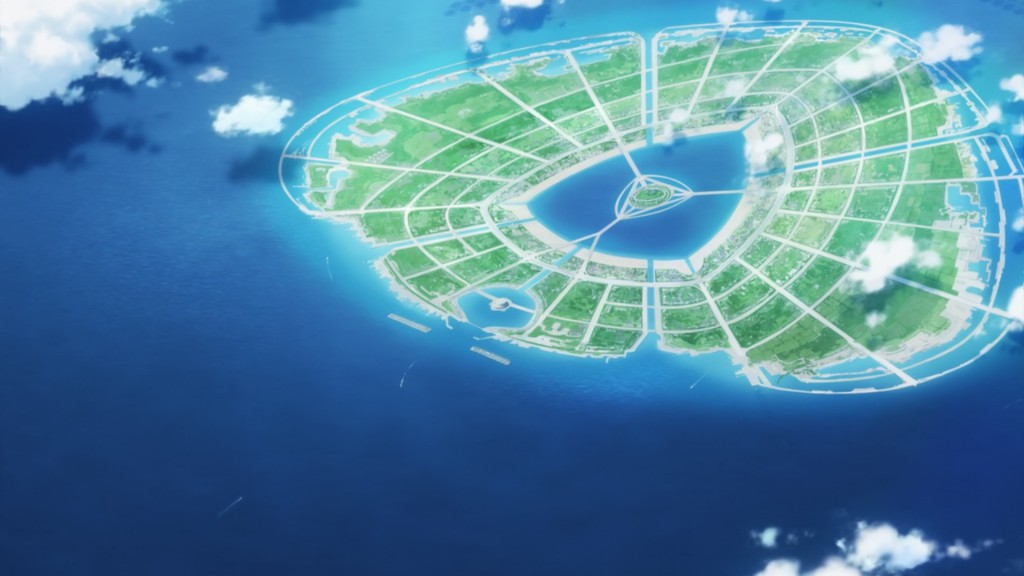 Technically, the show is certainly respectable, but tends to follow convention over innovation or artistry. The soundtrack is largely forgettable, but the Japanese dub is good quality and respectable, with some big names getting a shot like Hanazawa Kana as Daruko and relatively new stars such as Rui Tanabe as Nanana, who previously played Cecil in Wizard Barristers. The visuals and character designs are typical of modern anime, with bright, vivid colours and characters that feel soft and rounded. The designs of the ruins are well thought out, and often have a steampunk feel as they are trundled into life by clunking cogs and clockwork. The general environment and architectural work on Nanae Island is beautiful too, looking stylish and futuristic, while general animation quality is typically good, and most watching won’t notice any issues.

Nanana’s Buried Treasure is a pleasing show that is lighter and more vivid than the murder that surrounds its plot suggests. A strong cast and good character development are its core principles; and although development of its central element is light on the ground, story movement flows well and feels adequately paced. It balances the sexual fanservice within this well, not feeling overbearing, while the gaming fanservice will crack some smiles. It takes adventure and discovery in its heart and pulls up some surprising twists and solid entertainment.