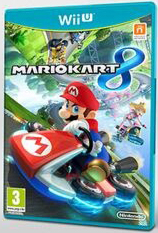 The Wii U has been defined as a slow-to-start console for Nintendo, with a lack of third party support and a barren wasteland of releases. But here at last comes along a title that was highly anticipated to make an appearance, and Mario Kart 8 is a game that affirms a strong vision of Nintendo’s HD future.

While we’ve had a trial run with Mario Kart 7, nothing could prepare you for how fantastically shiny and slick Mario Kart 8’s presentation is as you boot up the game. From the get-go visuals are sharp and crisp, backed by a jaunty big-band soundtrack that has become a staple of the latest generation of Mario games. It’s an exceedingly pretty game with a sense of cartoon hyper-realism, where the environments are drawn to an incredible level of detail. Despite the traditional Nintendo rhetoric of gameplay over graphics this is proof that graphics do have influence over your level of enjoyment.

So while the graphics have had a major overhaul, the game itself is the same old Mario Kart we’ve grown to love, blasting through a range of creative courses and experiencing the joy of tossing a shell into your friend’s face. As has become the norm, there are 16 new tracks and 16 retro courses which have mostly all been outfitted with the game’s new mechanic: anti-gravity. While some players wanted this in the form of F-Zero’s 360-degree madness, it actually works best at its most subtle as you climb up the side of the track to access boost ramps and item boxes to give you the edge over your opponents. Its lack of impact on some courses makes it seem a bit of a gimmick, but it enhances the overall creativity in courses like Shy Guy Falls, where you race up a waterfall. There are a couple of tracks which have poor design choices and seem overly short, but thankfully these don’t make a mark on the overall experience of the racing. 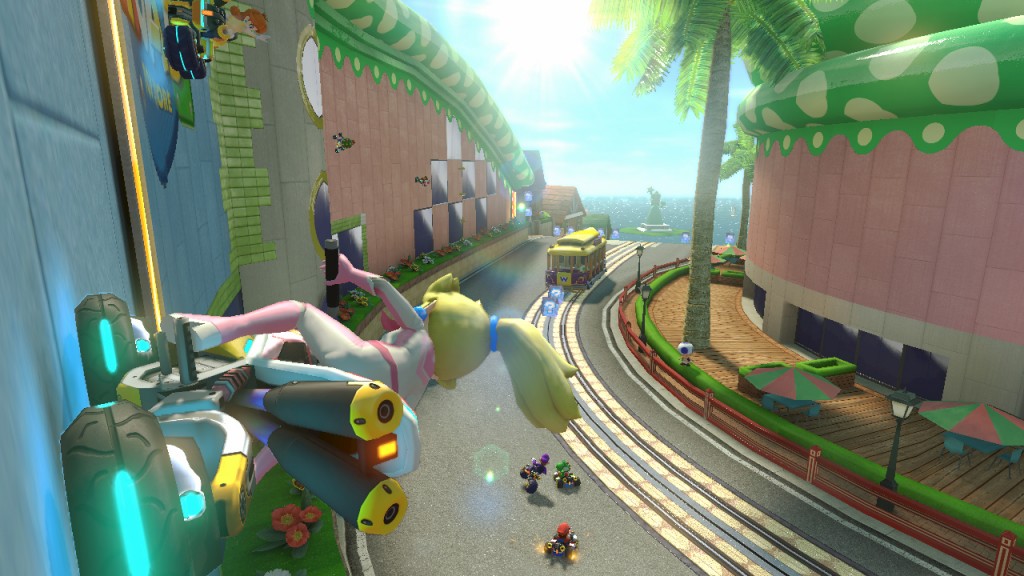 In single player, you’ll race around these courses in the usual cups of four tracks in Grand Prix mode, and attempt to set your best times in the time trials. For Grand Prix mode, all three main difficulty levels (50, 100 and 150cc) are available from the start which allows players to jump in at their appropriate skill level. Beginners can learn their craft from the beginning, while experienced players can get at the action while not having to snooze around in 1st place for a while. Mirror Mode, with its reflected courses, is available after you’ve completed 150cc and still sadly feels like empty padding to make single player longer, where more tracks would have been welcome instead. While this amount of content doesn’t seem like a lot, you can still get more out of single player racing thanks to Versus Mode, which returns after being absent in Mario Kart 7. This works in the same vein as local multiplayer where you can set up a custom championship of 3, 4, 5, 8, 12, 16 or 32 courses and race on any tracks you like.

While versus is a great place to practice, you’re more likely to find yourself heading into the time trials. These are great to not only show off your skill with online leaderboards and Miiverse integration, but also to hone your race craft and find the best routes and cunningly hidden shortcuts. Leaderboards aren’t strictly numerically ranked, but a graphical view shows you how your time scales up against the rest of the world and you can download and battle against other racers with their ghost data. 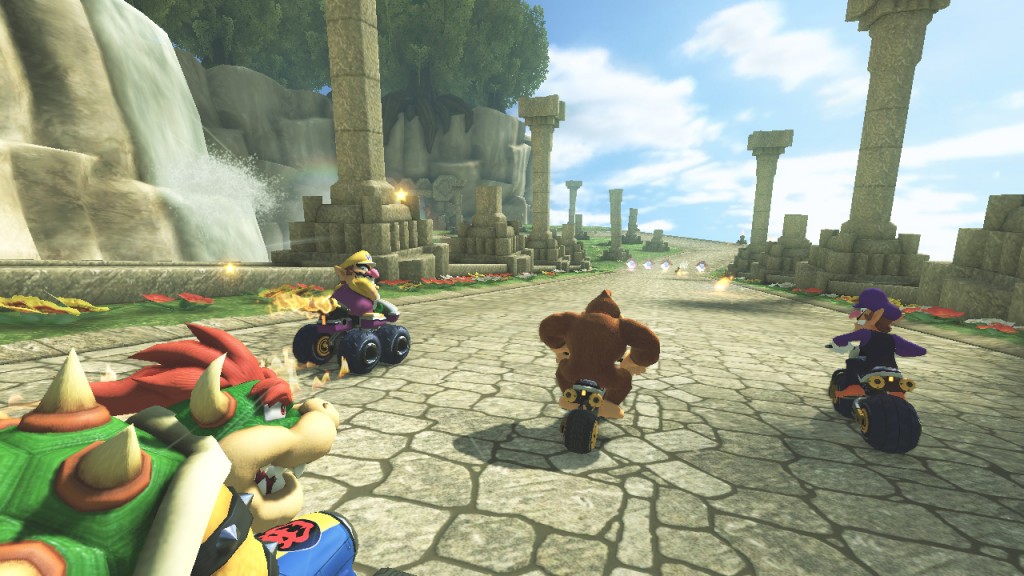 Despite the addition of anti-gravity, gameplay hasn’t changed much since Mario Kart 7 apart from balance tweaks and a few new weapons. Red Shells and other more powerful items are now pretty scarce with a lot of Green Shells hitting the midfield, along with the Boomerang Flower, which can hit opponents multiple times, and the Piranha Plant, which can be used to attack other players and collect coins and items from the track to give you speed boosts. The Blue Shell is still ever present, but you now have a line of defence with the Super Horn, which can destroy other weapons and send opponents flying into the air. The Super Horn is a nice attempt at reducing the Blue Shell’s annoying power, but AI opponents will still send a barrage of items to you on the last corner of the last lap unfairly robbing you of a three star ranking. The final gameplay tweak is the Spin Turbo, which offers you a small boost if you knock other karts out of the way on anti-gravity sections, and there are environment elements which give the same effect, giving you another weapon in your arsenal to seize victory in the closest of races.

And to find the closest of races you’ll have to take the action online or grab some friends. Multiplayer is the game’s key element and is where you’ll get the most fun out of it. You can connect to 12 player races by yourself or with a friend or join custom tournaments and public events with some frantic and skilled racing. Online modes are very stable with only slight elements of latency coming into play, but feels a more refined and polished experience than that of Mario Kart Wii. To find the edge you’ll have to exploit the game’s focus on strategy by finding the best character and kart combination that suits your driving style.

Characters are divided into weight classes; small, light characters offer good acceleration so are good for recovery, but heavy characters get the fastest top speeds and are often used by skilled players who are good at keeping up the pace and avoiding danger. All of your Mario favourites are available, and there are a good variety of newcomers with the likes of Super Mario Bros. 3’s Koopalings making their first appearance. Unfortunately there are still a lot of clones with there now being five baby versions of popular characters, like Mario, Luigi, Peach, Daisy and Rosalina, which saps away that variety and focus that was present in Mario Kart 7.

For vehicles you have a choice between karts, motorbikes and quad bikes which can be customised with a variety of wheels and air gliders. Each part has a range of visible and hidden statistics which affect how they drive on land, air and in water and it’s up to you to combine them into the ultimate racing machine. What you need can depend on the track or game mode, but the vehicles are generally balanced so that not one combination gives a clear advantage. The days of being forced to use Funky Kong on the Bowser Bike are over. 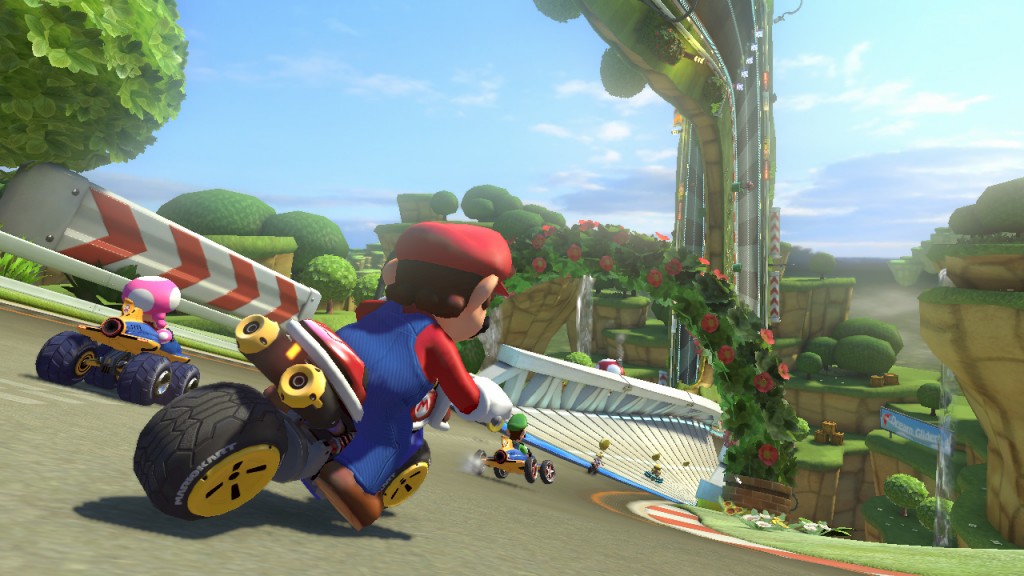 Multiplayer racing, whether online or local, is an absolute blast, so it’s a shame to see the other popular multiplayer mode get pulled down so far. Battle mode, where the aim is to pop other player’s balloons, was a fun favourite of past titles, speeding around colourful arenas blasting your friends to pieces, but Mario Kart 8 removes the arenas, offering just the standard tracks to battle on. This wouldn’t be much of an issue if they were properly repurposed, but the tracks are poorly optimised for this type of play as you find yourself going round the track for items then gathering in an area to hit opponents. It’s not as fun and feels like a tacked on extra more than a fun multiplayer mode in its own right.

If you want to share your best moments, like escaping from a Blue Shell or claiming first place with a well-timed mushroom, you can do so via Mario Kart TV, the expanded replays feature. Here you can see a record of your latest races, which you can edit to a degree into small clips by selecting which players and what type of action to focus on. After rebuilding your replay into a highlights reel of 60 seconds or less you can upload to YouTube to share with the world. It’s a nice little feature and captures the majority of the action well, but more competitive players who are used to video walkthroughs and gameplay streaming services like Twitch will find the lack of editing options restricting.

Mario Kart 8 is certainly then one of the finest games in the series, standing on par with greats like Mario Kart DS, 7 and Double Dash!!. It’s extremely fun to play in both single and multiplayer and there’s nothing bad about staying to the tried and tested. It must be said however that the formula’s age still shows despite its shiny visuals, and there’s still a lot of work to be done if Nintendo wants Mario Kart to stay relevant in the future.