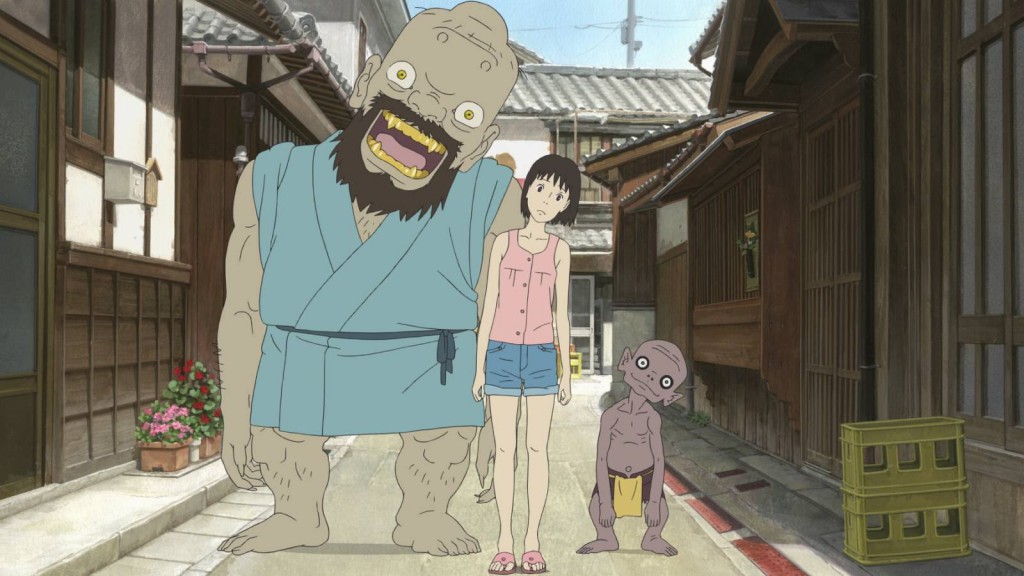 After the untimely death of her father in an accident on a research trip, the 11 year old Momo Miyaura and her mother ups sticks from the bright lights of Tokyo to her mother’s family home on the remote island of Shio. Grieving for her father and feeling alone and isolated in her new environment, Momo clings to an unfinished letter she found in her father’s study simply entitled “Dear Momo”; and a strange book filled with sketches of demons. As she struggles to make sense of what her father left behind, Momo becomes involved in a series of strange events that has more connection to her than anyone realises.

A Letter to Momo is the latest work from director Hiroyuki Oriura, his first directed feature film since his breakout work Jin-Roh: The Wolf Brigade. After an incredible seven years in production, Oriura’s vision is of a tale of coming to terms with the passing of a family member, surrounded by the freshness of a traditional world.

And it’s a pretty world at that; set in the middle of the Seto Inland Sea, the picture fills will bright blues and greens, sandwiching the brown meat of the village in place. With this being a remote island, the buildings are all in a traditional style, but great attention is paid to the details, especially in a shot that explains the practice of terrace farming on the mountainside. And that’s only half of it when you add the weather into the mix to create some excellent atmosphere. Sunny skies create a child-like sense of fun and exhilaration, while the oncoming typhoon offers a great backdrop when the plot takes an ominous turn for the worse.

With a lot of the plot dealing with death, A Letter to Momo has a distinct focus on how human relationships are affected by the death of a loved one. While on the surface Momo and her mother seem to be a part of an ordinary family, there is a lot of stiffness in their interactions which suggest a lot of unfinished business. Momo is at least the most open of the pair, as her body language and visual cues give insight into her feelings of loss and isolation – she is distant, often lonely and rejects the openness of the other children in the village as her newfound situation overwhelms her. Her mother on the other hand buries her head in the sand, trying to forget a tragedy that should never have happened. It’s obvious that she cares deeply for her daughter, but she is often absent as she concentrates on studying towards a new career and constantly puts on a brave face as not to worry her family and friends.

The two different approaches cause some major fights between the two, causing them to drift apart as they fail to understand the most important connection between them. Much of this is grounded in reality and appears emotionally strong, as many would be able to identify with at least some aspects of the inner conflict; but at times this feels either forced or inserted just to make the plot move along or provide a resolution. 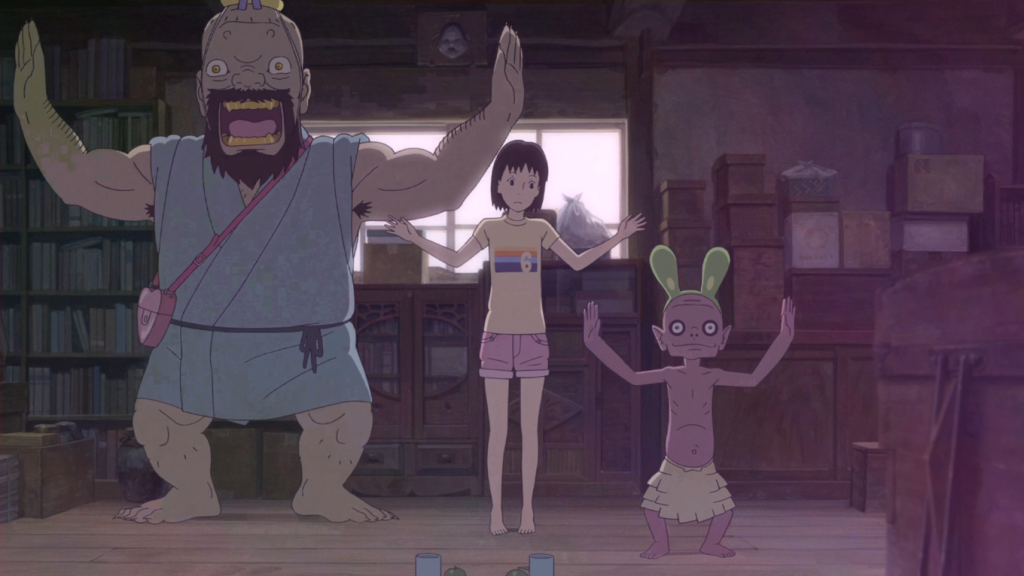 Despite quite a serious subject matter, A Letter to Momo is for the majority a fun, slice-of life adventure helped along by the strange, disembodied voices that Momo begins to hear while her mother is away. Like with any child, fear of the unknown is a firestarter, and Momo shoots out of the starting blocks for a whirlwind sequence which sees her sprinting through the village, chased by three mischievous goblins. This oddball bunch takes inspiration from the mythical Japanese trolls and imps of old, and as a result fit right into the traditional village. They’re quite grotesque, with the smallest being the closest to seeing what Gollum from Tolkien’s The Lord of the Rings looks like in anime form, but at the same time they are never portrayed as evil. With the trio being goblins, it would be easy to assume they were the baddies of the piece, but there’s actually no such thing – we simply have a cast of characters who quickly bond through their oddball interactions. They are played for comic relief, but their effect is clearly aimed at a younger audience, with a lot of crass, childish humour. Sadly this begins to mark the film down as targeted more at children or families, diverging away from Momo’s relationships as we instead get an adventure about the four of them being chased up the mountainside by a pair of wild boars. If the goblins had not been used so much, the film may have taken a different and more serious direction, but as it is they frequently get in the way of what we want to see the most of.

They similarly get in the way of the use of the side characters, who appear to have a lot more to say than they actually do. A touching interaction between Momo and her grandfather leaves you wondering why he wasn’t a bigger part of the picture, and the lives of the island’s main group of children could have been explored further. The leader of the kids, Yota, often seems like a potential future love interest for Momo as the two begin to bond well away from the main group, which we don’t really get to know much about. 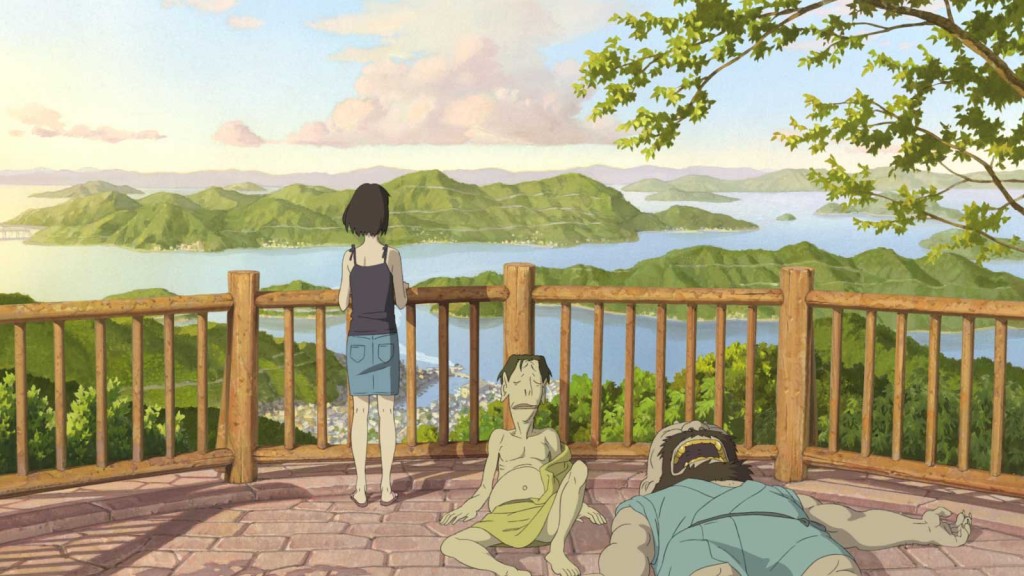 Being an animated film of a relatively sizable budget, the voice cast is made up of live-action actors and actresses, some of which are putting themselves out on the voice acting line for the first time. Voice acting may be a distinct art, but the cast tackle the script with vigour, giving heartfelt performances throughout. The soundtrack composed by Mina Kubota does give a good background but due to its more instrumental and laid-back nature it is not as memorable or creative as some other big anime films.

With its strong focus on human relationships and a serious subject matter, A Letter to Momo could have been a classic in the making, yet its overuse of the goblins and their childish sense of humour, forced plot developments and missed opportunities make it miss the mark.