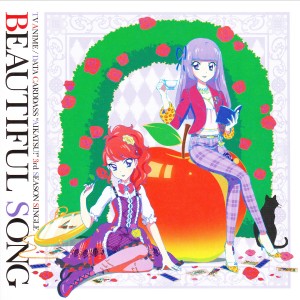 The latest offering from the idol anime juggernaut that is Aikatsu! is here, bringing three tracks from the anime and trading card-cross-videogame franchise.

The first entrant is the gothic-themed タルト・タタン (Tarte・Tatin) which has a very French flavour, making for something different from what we have seen in previous Aikatsu! music releases. Mona’s eerily girly tones work well when calling out French numbers, and a bridge at around 1:40 emulates stereotypical French folk music. While the gothic tones are there, it’s brighter than the previous entries to the gothic theme, with Glass Doll being darker and more traditionally gothic, while Eternally Flickering Flame is a lot heavier. As such it doesn’t really live up to its predecessors, but is still quite enjoyable.

The second track, Passion flower, is the central song for the Flamenco-toting Kuribayashi Juri. While it has a Spanish flair it still distinctly feels like an idol track, and to that extent fits in with the franchise well. As vocals go, this is one of the more mature sounding tracks with Miho and Mona’s voices blending together to create a finer and less shrill sound than what idol music is traditionally known for. Aikatsu! has always been pleasantly surprising in that regard, with many of the more popular tracks being sung by the more mature-sounding singers within the STAR☆ANIS and AIKATSU☆STARS! groups. While outshone by タルト・タタン, Passion flower is still a pleasant track to listen to, but probably not one that is going to get a lot of replay.

Sadly, with this single’s international focus, the final track, はろー!Winter Love♪ (Hello! Winter Love) is a pretty generic idol song and as such is the most uninspiring track offered here. First featured in the anime for the 2014 Christmas episode (#114), it certainly feels attuned to the festive period being a lot more relaxed and cheery than the passionate songs that precede it. It seems nice to just chill out to, similar to other songs from the franchise which are themed around the more cutesy or feminine characters and fashion styles. It may not have impact, but with its heartfelt caress, it doesn’t need it.

As Aikatsu! insert song singles go, this setup follows the trend of having a clear rhythm of fast paced tracks moving into a calmer finale, and even though it can create a mixed bag at times it does offer more value for money than being restrictive and limiting song choices to the most popular. If it works, there’s no need to change; and for Aikatsu! fans that means another purchase well-made.