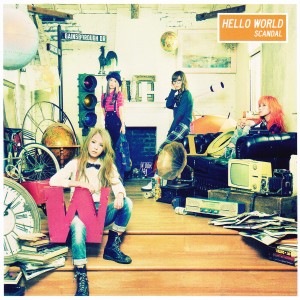 All-female pop/rock band SCANDAL embark on an international voyage with their latest album HELLO WORLD, available in the UK now from JPU Records. The girls’ sixth album continues their pattern of annual releases and features 13 new tracks and 2 bonus tracks on the UK release, coming packaged in a standard jewel case with original Japanese booklet and an extra booklet featuring song lyrics in romaji and English.

Hello World sticks to the trademark SCANDAL style of upbeat, poppy rock; filled with an immense sense of energy and life. The pace is kept relatively even, with a little variation here and there, but there aren’t any slow, ballad-like songs.

The album kicks off with Image, which is quite an inspiring and courageous piece that end up matching well with its promotional video that sees the girls posing as superheroes, helping give people the push to get past their problems. The track sets the tone for the rest of the album, with things never getting too hyper or too slow, which makes SCANDAL a good band for a first introduction to Japanese music, being more accessible than the sugary sweet world of idol music or the heavier styling of visual kei.

This accessibility and internationalisation is what the initial part of the album is about, particularly with the second track, Your song, which was written through a collaboration with the NHK World music programme J-Melo in the show’s seasonal New Song Project. The theme for the song is “words and phrases which are special to you”, and as such the lyrics are designed to be both nostalgic and inspirational, coming together to form something that does have international appeal and meaning.

Similar inspirational themes continue without, with Love in action spreading a bit more love around the world, and Graduation expressing not sadness and longing for the past but brightness and hope for the future.

It’s this type of music that SCANDAL is about; tracks that are uplifting and easy to listen to that can really put a smile on your face. While the tracks on this album arguably won’t become as well-known as big anime hitters like Harukaze and Shunkan Sentimental, that doesn’t mean that they can’t be loved just as much. This is a fine effort and an album that every Japanese music fan should have in their library.