Durham University has a long history of offering study in the Orient, which covers not just China but the entirety of Asia, the Middle East and northern Africa. We paid a visit to the attached Oriental Museum to check out their collections of artefacts from various countries over a long period of history.

The museum is spread across a tiered set of four floors, extending down the small bank where it is located opposite Van Mildert College. The basic layout comprises of:

With the entrance being at the top, floor 1, it is easiest to start at floor 4 and make your back up to the top.

The majority of the museum’s Chinese collection dominates the fourth floor, comprising mostly of ceramics ranging from the beginning of Chinese history to the contemporary period of the People’s Republic of China. Placing artefacts from over two thousand years of human history all in a line provides an interesting case on how as a species we have culturally evolved, from basic geometric patterns to much more elaborate designs using a variety of different glazes and materials.

Going up a floor showcases a variety of items from other Asian countries, with a particular focus on India and the Himalayan nations. A case showcasing objects from British Imperial India was of particular interest, along with some displays of weapons of the region such as an impressive pair of Chakram with a shield. Most of the items in this collection seemed to be centred on local religion, with items from Hinduism, Buddhism, and Sikhism. It was certainly pleasing to see such objects, but a lot of this material does need the understanding of each individual culture to appreciate fully. 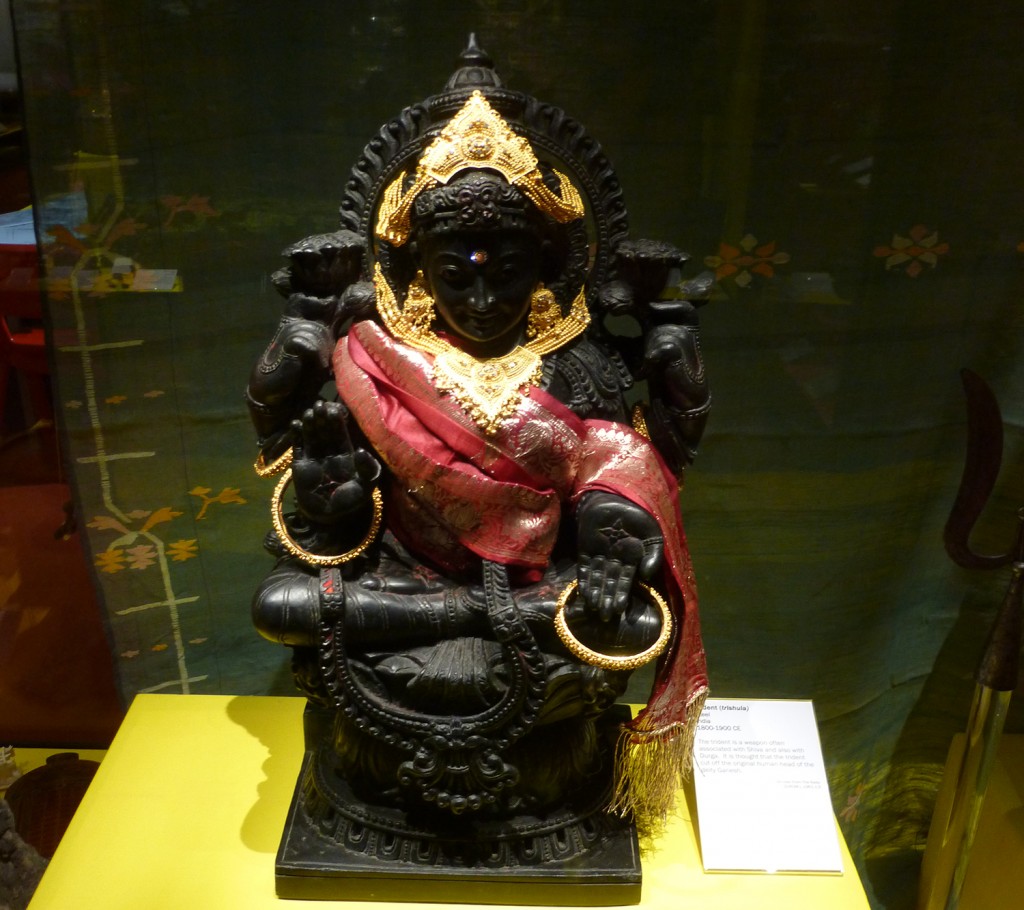 Moving upstairs again and we are presented with two half floor exhibitions, one for Japan and one for Korea.

The items on show in the Japan area are separated into distinct sections of military, religion and culture. Taking centre stage is a full set of Samurai armour, accompanied by a variety of weapons including a bow, spears and short swords. All seem to be kept in good condition; however the most impressive is an Edo period sword blade, which looks like it is actively maintained – the blade shone distinctly in the light in the casing. Even though it is missing the hilt and trimmings, it’s certainly one of the more valuable pieces in the collection. In fact, all of the weaponry on display is a valuable asset, as unless you go to one of the museums in Japan, it is unlikely you would get to marvel at the size of a Japanese longbow, which will surprise visitors who are more familiar with archery as a sport rather than a mechanism of war and survival. 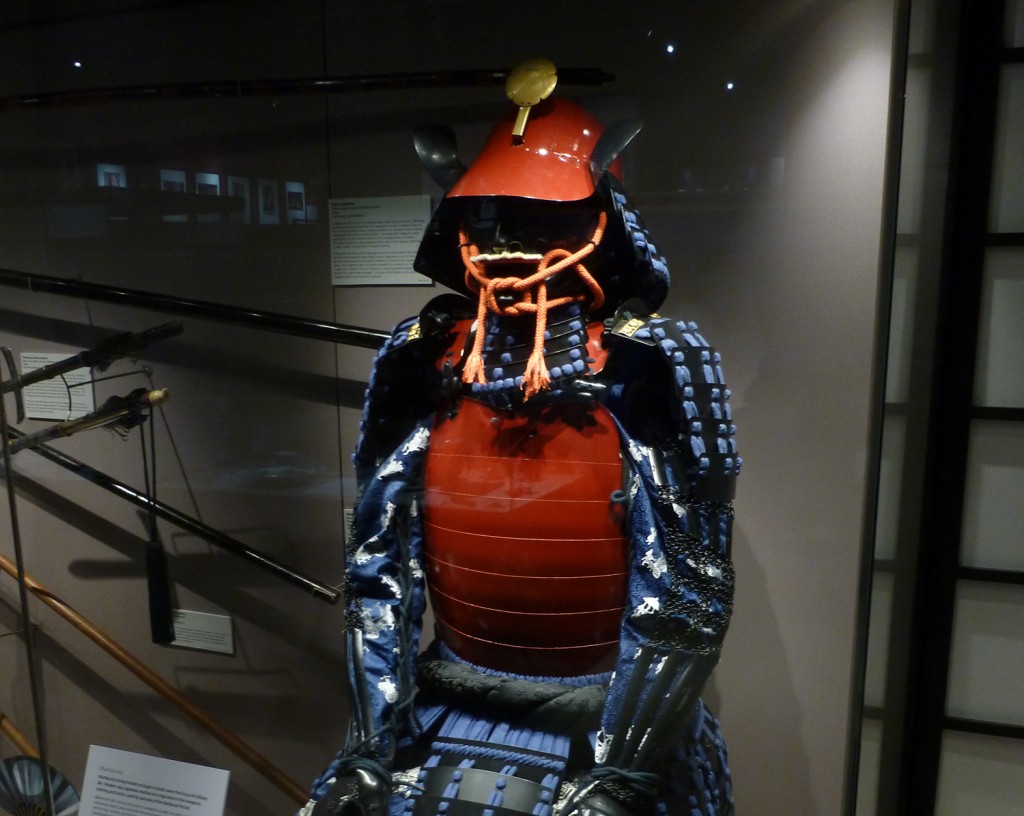 Situated to the right of the military case is the religion case. On display is an entire butsudan, or household shrine, that the Japanese use to honour family members who have passed away, placing their photos amongst these elaborately decorated pieces in a closed off space in their homes. While Japan is said not to be so much of a religious country, pieces such as this show that people take their beliefs seriously, and that’s a really good thing. Alongside the butsudan is placed a Buddha head, a medium-sized incense burner and a temple bell. Japan traditionally operates religiously on a system of Shinto-Buddhism, with the folklore of Shinto and the teachings of Buddha co-existing together. Descriptions identified such, but the display felt like it did not represent the diversity of the country’s belief system. Still, considering that the museum relies on public donations; it was impressive to see what they had. 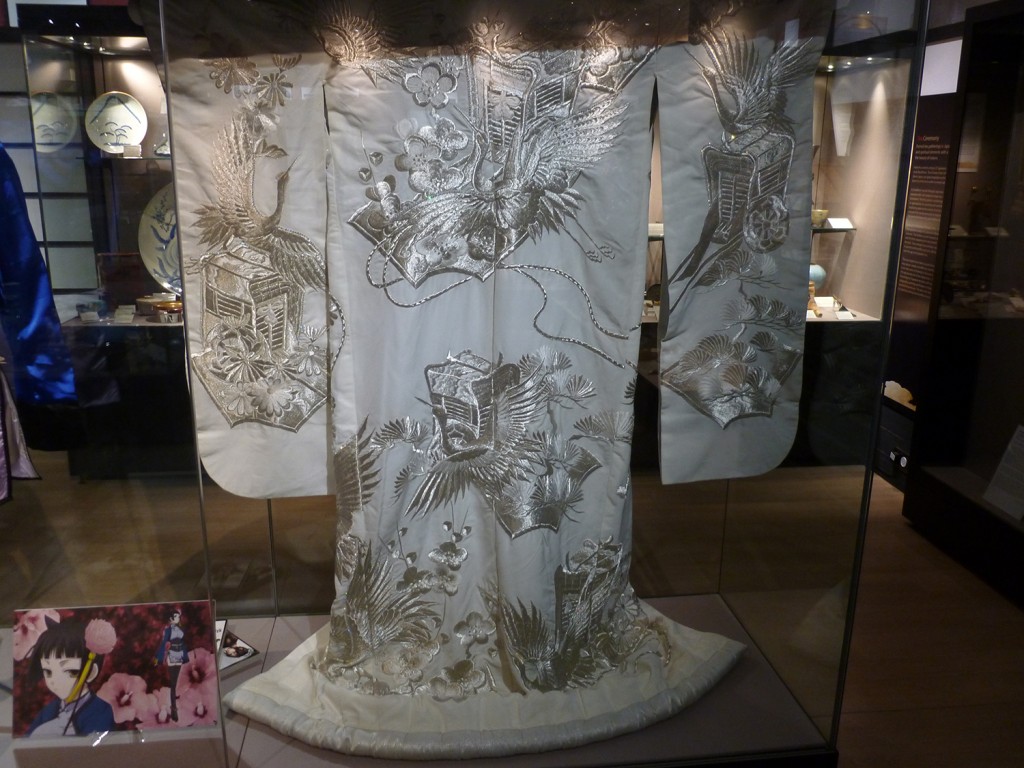 The rest of the collection was filled with a large variety of cultural objects, from fashion to writing. A wedding kimono dominated this half, elegantly spread and showcasing its ornate embroidery. This was accompanied by some modern day objects with a cosplay outfit and a collection of manga and assorted merchandise from the Black Butler franchise. Appreciating the modern period is certainly a great idea, as the majority of museums tend to focus on history as being the far past; for example medieval Europe, ancient China or Rome, and a reflection on how the past as influenced the present is often missed. This is something that Durham’s Oriental Museum excels at, and it is pleasing to hear that they are considering putting in more modern items.

If the museum staff aim to capitalise on this, they do however need to make more efficient use of the limited floor space, which unfortunately has left many items in storage. Despite advertising a large collection of ukiyo-e woodblock prints, these are kept in storage and are only available by appointment. There was a set of drawers where it appears they would be kept, but all of the drawers were locked apart from one showing a reproduction print. 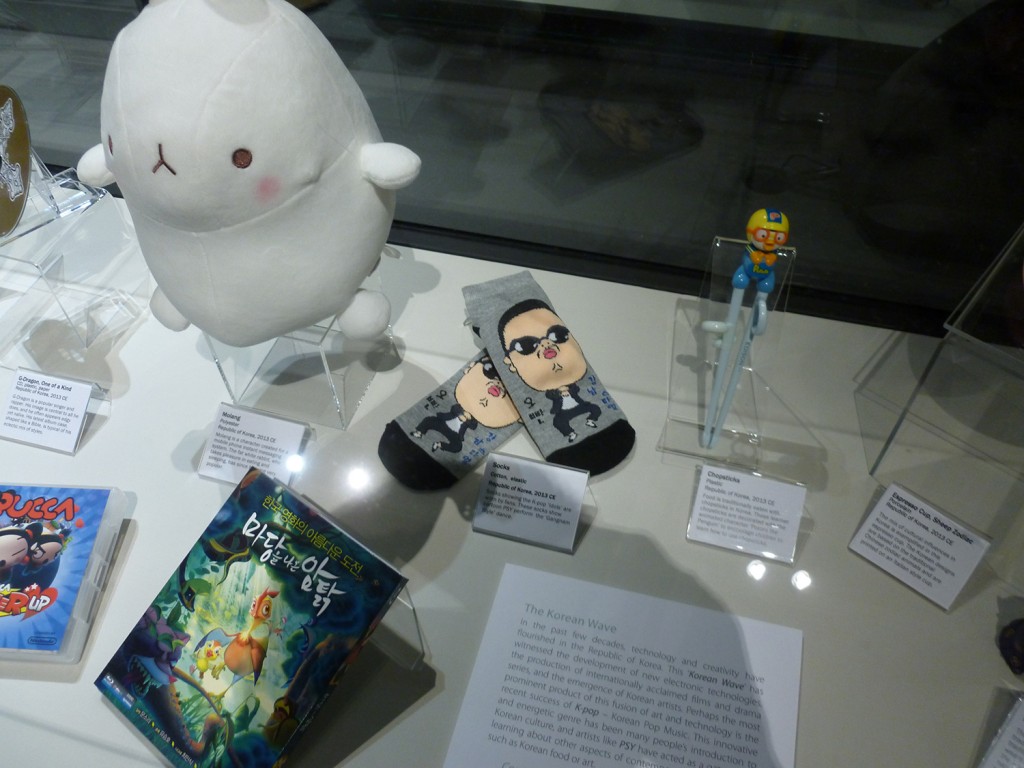 Korea, with its culture being very similar to Japan and China due to being close both geographically and culturally, felt a lot of the same. There was however an interesting show for music lovers with PSY merchandise, a Girls’ Generation CD, and a CD from Super Junior’s junior unit. There are a variety of other artefacts from paper fans to a large wooden set of drawers, which highlighted that it was constructed low to the ground as Korean houses have low ceilings; which seemed an interesting cultural fact.

The top floor currently has a special gallery celebrating 30 years of Nissan in the North East of England, featuring photographs of the Nissan factory in Washington. Move past these and you get to another section about China, with a large wooden bed taking up the majority of this closed off space at the back of the museum. The interesting things on this floor are past this however, with the Middle East and the Silk Road getting about a quarter-sized floor space. Items in this section particularly focussed on trade and development of the Middle East region; while some references to Islam add some religious context, something that in this era of religious extremism is very useful to see and understand.

Two adjoining rooms hold a small collection from Ancient Egypt, with the most interesting items reflecting on Egyptian mythology and the traditional burial rites. This section is more varied than the Chinese section, which came as a surprise, as with this being the Oriental museum, under the British sense of the Orient being East and Southeast Asia you would expect the Chinese exhibition to be superior; but this was not the case.

Overall it was an interesting place to visit, with a mixture of historical and modern objects from a diverse range of Asian cultures, with a smattering of Ancient Egypt. Sadly, it can’t be recommended as a place to visit on its own. The limited space inside the museum means that a lot of the objects the museum holds are behind closed doors, and there is a lack of variety in some exhibits, particularly China. Despite this it’s a good place to integrate into a general visit to Durham, although it’s a little out of the way at the south end of the university campus. If you’re in the area, go check it out!