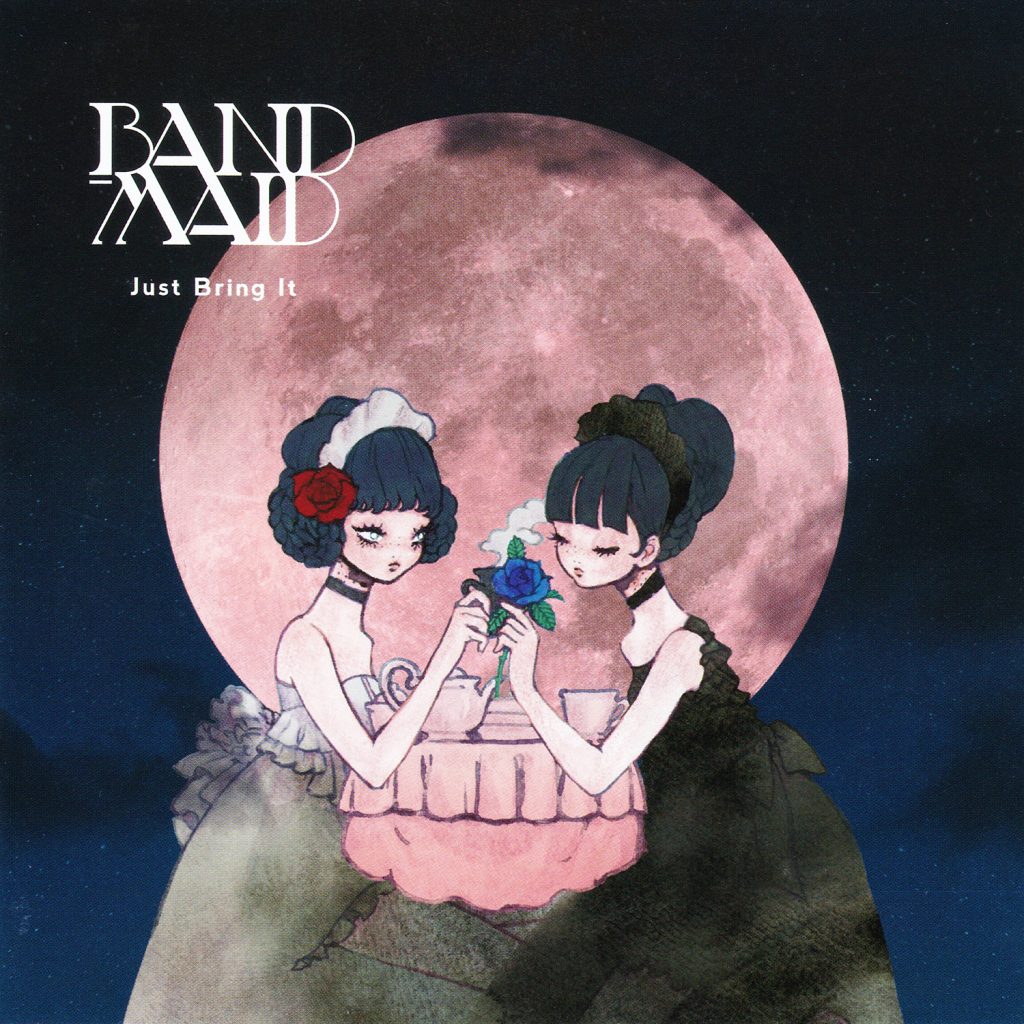 In Japan, maid cafés are rather cutesy affairs, made to pander to the stereotypical otaku guy with frills, photos and a catchy idol tune. Put that maid image to the slamming guitars of hard rock though, it it takes on an entirely new meaning – welcome BAND-MAID.

This group of girls wearing maid outfits and slinging guitars formed in Japan in 2013 and their music was brought over to the UK last year by JPU Records firstly with the mini-album Brand New Maid and now with their first studio album Just Bring It.

Having not bought into the band before, missing out on Brand New Maid when I was at Hyper Japan, I was instantly impressed by the opening track on this album, Don’t you tell ME. Having experienced a lot of all-female Japanese rock bands who do softer, more pop-like rock music, it’s refreshing to find a band that fits in the hard rock space in between that soft rock and the madness that is BABYMETAL. They have vibes of well-known western hard rock acts with heavy guitar riffs and some great drum work. Vocals sound rich and mature and will certainly be a step up for metal fans who have picked up on the Japanese rock scene from the younger, higher pitched BABYMETAL.

This album features thirteen tracks, which seem to have been grouped together so the tracks of similar styles flow into one another. The front of the album is made up of the heavier stuff like the aforementioned Don’t you tell ME, puzzle, YOLO and Cross. Each of these can stand strong when placed on their own, but when put together they each sound so similar it’s as if you’re listening to one really one song. It’s up for debate whether this was intentional, but it tends to get a bit much in certain sections, particularly with Moratorium (モラトリアム). Either way, there may be a secret to listening to this, but I’ll get into that in a moment.

The lyrics are majoritively Japanese with a smattering of English here and there, and of course unless you understand Japanese you won’t be able to understand the song. In these situations there’s a tendency to focus on the music more than the vocals so this could attribute to some of the feeling that everything is too similar.

Things get more varied in the second half though: Take me higher ! ! has a greater focus on the bass, TIME is slower and more growly, while you. has a couple of cool synth sections that really break things up. Things get slower and simpler with Awkward before ramping up again to a rousing finish with decided by myself and secret My lips.

Now, remember when I said there’s a secret in these tracks. Well, in breaking all of the walls in writing this review I have discovered that the track titles can be rearranged to make sentences of sorts. Changing the order of the tracks to cobble up something coherent actually makes the album sound a lot better and gets rid of the issues with flow in the numbered order running. I’m sure this isn’t the first time someone has tried something like this, but if this is intentional it is actually really cool.

So then, BAND-MAID’s first studio album is one I would consider a success and one I would highly recommend. Existing J-rock fans will get stuck right in and there’s a lot to appeal to fans of western rock too.

You can check out some of the tracks featured on the album on BAND-MAID’s official YouTube page.