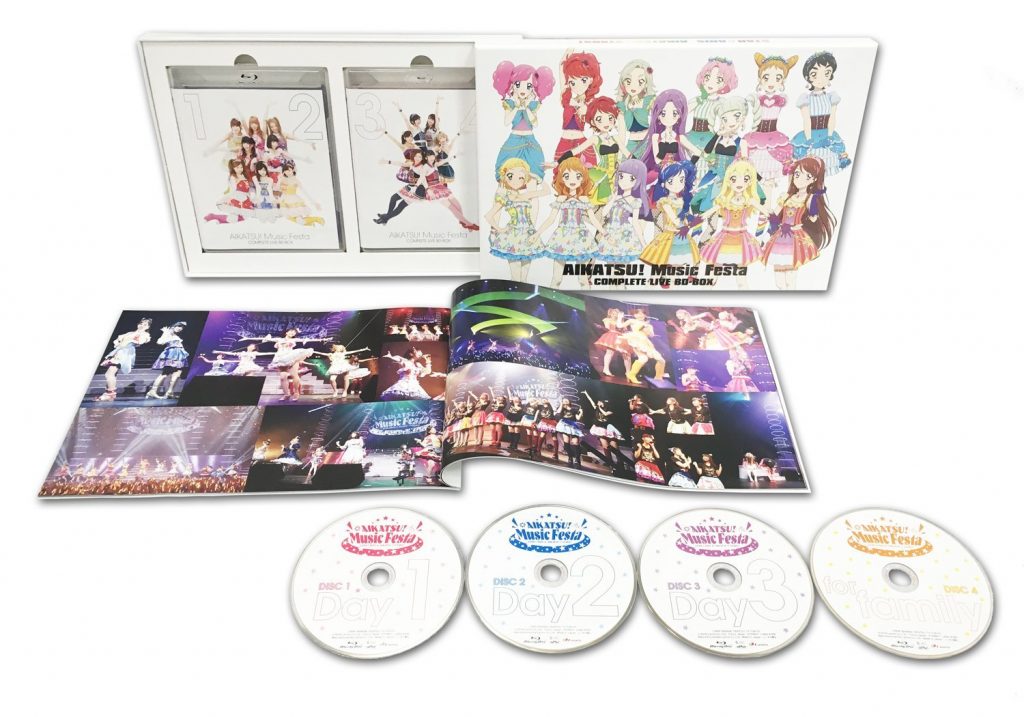 It’s official: Aikatsu! has gotten so big it now has its own three day festival. That’s right, three whole days of Aikatsu! celebrations. Aikatsu! Music Festa follows on from the previous big live concerts performed by STAR☆ANIS and AIKATSU☆STARS! in 2015, this time being held at the Tokyo Dome City Hall from the 19th – 21st March 2016. What we have here is the complete collector’s box of the concerts on all three days of the event.

And it’s a gorgeous box too, being a massive improvement over the previous concert Blu-Ray releases. When they say box, they mean it, with everything packaged in a flat shiny cardboard box with a high quality print of the main idol units from Aikatsu!: Luminas, Soleil, Tristar, Vanilla Chili Pepper and Powa Powa Puririn.

Inside, you’ll find two standard Amaray Blu-Ray cases containing all four concerts (one disc for each day, plus the “For Family” performance); along with a Special Book, containing photos from the event and interviews with the members of AIKATSU☆STARS! and STAR☆ANIS.

With this being a Japanese-only release, the interview pieces can only be read if you can understand Japanese properly. The set is aimed at an adult collector, so there’s no furigana to help with the kanji either. That’s a shame as it would have been nice to read what they had to say; but at least they have been included. Each idol (apart from Mona, who left the group before this set went through production) has also left a message of thanks, something that really helps build a connection and makes you smile at their little sketches of hearts and cats, and comparing who has the worst handwriting (which seems to be Yuna).

Onto the discs themselves and each concert occupies a single disc in this four disc set. The first three are the main evening concerts which really hit home with the idol experience. There are some real surprises in the song choices, and the singing line-up for quite a few songs is different to what you may have heard in the anime or on the CDs. While the songs are mostly the same, they tend to be ordered differently in each. They could have simply done the same performance each night and chose the best one to release, but having it this way makes sure that each viewing is unique in some way. Of course, this can make one concert feel better than another, but it makes the overall package better value for money.

It feels even better when each song in the main concerts is performed in full, rather than being cut down as has been done previously. There’s no longer that feeling of tension and disappointment in cutting short one of your favourite tracks. Song transitions are done well and the MCing is often genuinely funny and full of in-jokes that Aikatsu! fans will love.

While the content on the first three discs is fantastic, the “For Family” concert feels a lot weaker. This is the daytime performance held specifically for children and as such has a completely different atmosphere. Sure the kids are having a great time, but a lot of what makes idol performances so electric – the call and response and the crowd chanting – just isn’t there. A lot of the songs are the cut-down versions too, shortening the performance so the kids don’t sit around too long. It’s still interesting to watch once, but it’s not a disc that you’re going to come back to.

The composition and technical makeup of this release isn’t the best it could be. There are several places in the performances where a cut to black is used with no context, then it will jump straight into the next song. This could have been for something like an interval or a costume change but without that context it breaks the entire flow of the concert. Thankfully it doesn’t happen often but when it does it will really jar you. There’s also an issue with the second concert where a camera on the left of the hall has a different colour balance than all of the rest which can be distracting.

Sadly there are no extras on this release, which is a shame as the backstage extras on the previous releases were really fun to watch. They’ve also altered the disc menus to a shadow of what they used to be. Gone is the tracklist with the chibi characters showing who sings what song and in its place is a single box that rotates through the song titles.

Other than those issues, Aikatsu! Music Festa is an essential purchase for any Aikatsu! fan. Each disc is filled with moments that are guaranteed to stick a smile on your face and the song choices ensure that there’s going to be at least your favourite style represented. The on-disc presentation could have done with some more work but the packaged presentation just about makes up for it.