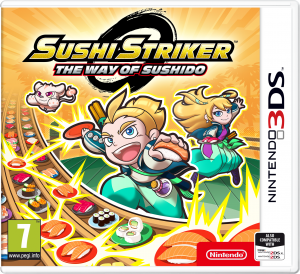 Ever been to your local conveyor belt sushi restaurant and imagined grabbing a stack of the sushi plates and flinging them like Frisbees? Well, someone evidently had that idea as Sushi Striker: The Way of Sushido brings sushi plate flinging puzzle action to Nintendo 3DS and Nintendo Switch.

While I’ve only played the first hour or so of the Switch version of Sushi Striker (covering the same content that is in the demo), I’m finding it to be a really fun puzzle game that wears it’s Japan-inspired heart on its sleeve. From it’s opening catchy J-pop song to the colourful cast of characters, this is a game that has a surprising amount of production value for something you may have passed off as a filler title. This was first announced in 2017 as an exclusive Nintendo 3DS title, and while I initially passed over it then, playing the recent demo of the game really captured me and got me to buy it.

The story is very off-the-wall, talking about a great war over sushi, believed to be the greatest tasting food on the planet. The war is won by the Empire, which starts hoarding sushi from all over the world, making the common people go hungry as a result. As the player you are Musashi, a young kid who by chance meets a travelling sushi striker, a person who engages in these ferocious sushi plate battles. After bumping into a band of imperial soldiers, your new sushi striker friend is captured and it’s your job to go rescue him using the power of the sushi sprites. These kinds of stories seem to have become a thing in recent puzzles games, like Puyo Puyo Tetris for example, and I actually rather like them. You could just give a traditional main game mode, then multiplayer on the other side, but including a story gives me more of a motivation to play the game; especially as I’m not the biggest fan of puzzle games. I’ve dabbled in Tetris, Dr. Mario and others; and while they are fun time wasters, they’ve always failed to really hold my attention. With a story mode I can see myself continually coming back to it and playing through the full experience. 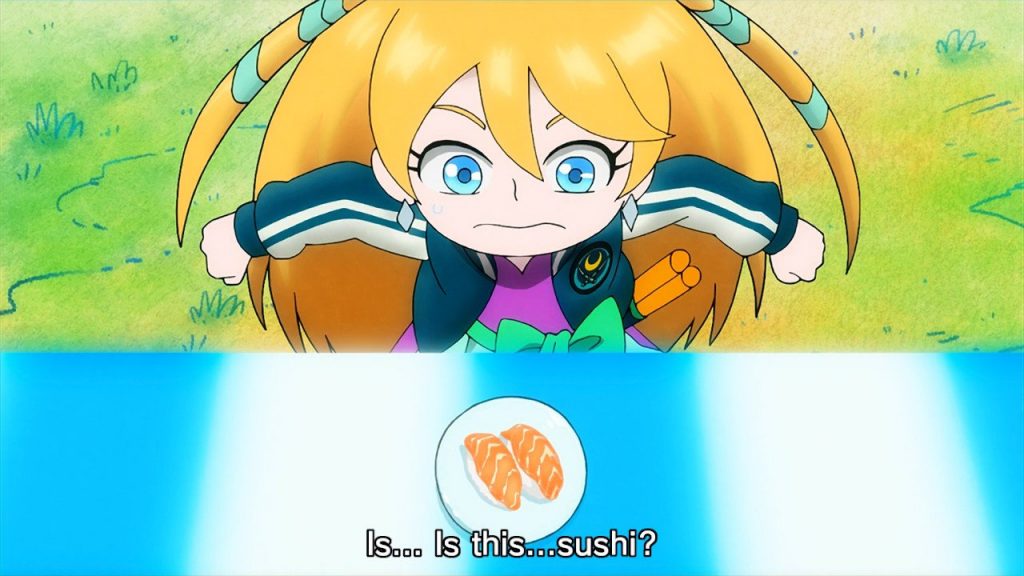 The first chapter of the game eases you into things and allows you to try new gameplay mechanics out before putting what you’ve learned into a boss battle several stages in. You aren’t expected to master everything right away, but even with these early levels you may have to repeat them once or twice if you’re not using your new ability to its fullest. I was surprised at the level of depth that the game has – this isn’t just a simple match-3 style affair and there’s a lot of different mechanics and strategies you can use to give you the edge over your opponent. As plates zoom across the conveyor belts in front of you, you need to stack chains of plates of the same colour, with different coloured plates having different amounts of damage they can do; and the more damage a plate colour does, the less likely it is to appear. You can chain a large stack of the most common plates quickly for a decent attack but chaining the more powerful plates and playing a more patient and strategic game will enable you to make much stronger attacks. You can’t wait around forever though, as you only have seven seconds each time you start chaining plates to complete a stack – if you don’t release from your chain before those seven seconds are up you’ll lose the entire stack. So that time you spent waiting for a fifth silver plate may have been wasted if during the same time you can gather a larger bunch of dark red ones. 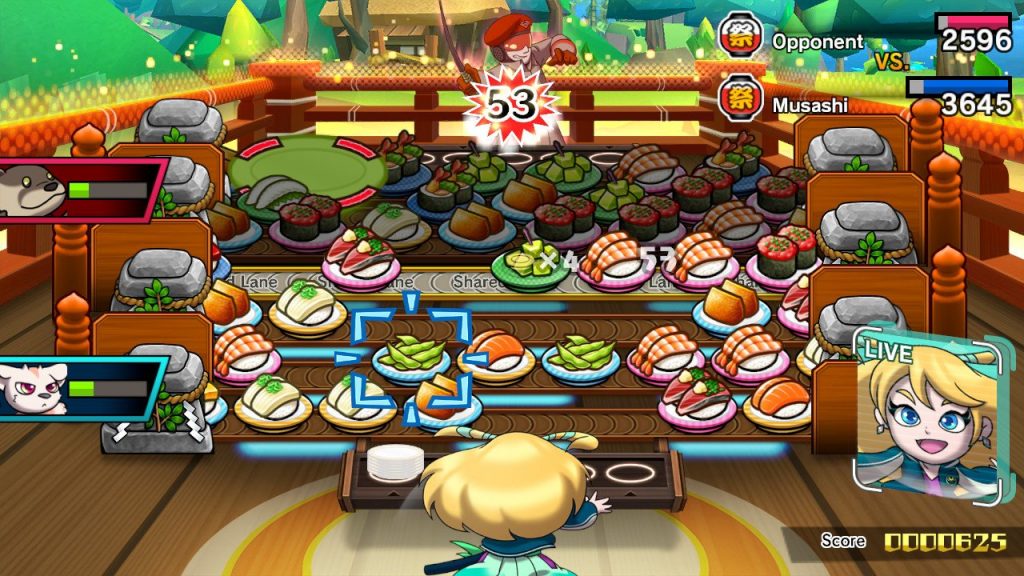 I do like this element of strategy so you can’t just whip around aimlessly. Your style of gameplay is also influenced by the sushi sprites you bring along with you. These colourful, Pokémon-esque creatures are what allow you to sushi strike in the first place and each sprite has its own stat bonuses and special ability. The special abilities can be activated when you’ve maximised your special gauge by collecting large stacks of plates, and these can do a range of different things, from making it easier to collect sushi, hitting an opponent with an attack for more damage, or helping you out in a pinch. The ones I’ve tried so far are Sushi Bonanza, which turns all the sushi plates on the belts at that time into the same colour, allowing you to create bigger stacks, and Sweets Paradise (wait, was this inspired by the dessert buffet chain?), which loads desserts and fruit onto the belts which you can pick up individually to restore your health. I find these abilities really useful as they help to cover your weaknesses and can give you a boost at a critical moment. As you can take 3 into battle with you at any one time, you can pick and choose according to your playstyle, whether you want to be more offensive or defensive. There are 100 sprites to collect so that should offer plenty of different combinations and styles of play. 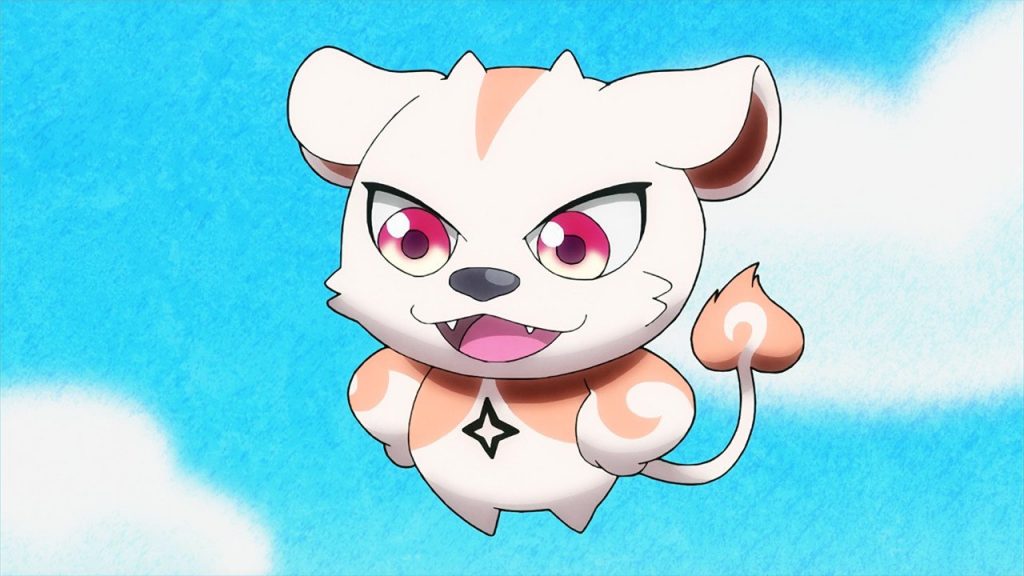 As this was a 3DS game, you can play with the touchscreen as well as buttons, and it seems that which way to go is purely personal preference. The game is designed so that both control methods work equally well, as you are performing a dragging motion rather than tapping the screen. For buttons, you hold the A button and a direction on the control stick to move your cursor around; and as you’re only moving in those eight standard directions I find this works really well and I in fact prefer it over touch controls. As you have to pause and wait for the next sushi to come along, I found the control stick much more accurate than having to hold my finger perfectly still for it to register. For those who desperately want touch controls, this may be easier with a stylus, so I’d probably advise you to go with the 3DS version.

That said, the game has adapted really well to Switch. The visuals look great on the TV, but I find they really pop on the Switch’s 720p screen in handheld mode; and it highly lends itself to being played on the unit itself. While I’ve mostly played my Switch in docked mode thanks to The Legend of Zelda: Breath of the Wild, Splatoon 2 and Super Mario Odyssey being more suited for it as console games, this will join Mario Kart 8 Deluxe as a game that I take my Switch out of its dock for and play on the go.

Even at this early stage, I’m loving Sushi Striker. It’s really grabbed me with it’s wacky story, popping anime-style visuals and surprisingly deep gameplay. If you want something different that you can pick up and play on the go or just a fun and unique puzzle game I’d definitely say it’s worth a shot.