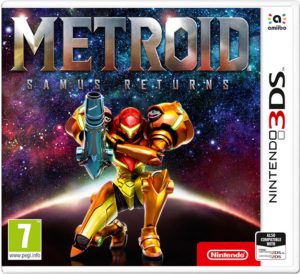 Metroid: Samus Returns returns the series to its traditional 2D Metroidvania style in a return to form after two disappointing entries in Metroid: Other M and Metroid Prime Federation Force.

Developed by Spanish studio Mercury Steam, Metroid: Samus Returns is not just a remake, but a reimagining of Metroid II: Return of Samus, which first released on the Game Boy in 1991/92. As bounty hunter Samus Aran, your mission is to find and exterminate all of the Metroids on planet SR388, ridding the universe of them once and for all.

Over the course of the game, you’ll traverse the eight sub terrain areas of SR388, seeking out and eliminating each of the 40 Metroids in traditional Metroid-style boss battles. Despite how low-tech the original was, it is known for introducing the several different evolutionary forms of Metroid that we surprisingly have not seen since in more recent games. As you progress through the game, the Metroids you encounter will evolve and get stronger making sure that you always have to stay on your toes. That said, with 40 of the blighters, you’ll be seeing a lot of the same forms over and over again and as you become more familiar with a certain form, battling it becomes increasingly trivial. While this is a fault of the design of the original game, it’s a shame they couldn’t toss in more boss variety. Not to say they haven’t tried – there’s a couple of familiar creatures in there and a brand-new mining robot that you’ll encounter several times – but having to face the same type of Metroid over and over takes the thrill and anxiety away from encountering one. As this is a reimaging, it’s not just a couple of new bosses that make up the difference – there are a whole host of changes and tweaks that make it a much better experience, including the two main new features that fundamentally change how you play the game – full 360 degrees free-aiming and the melee counter.

With free-aiming, you have full directional control of Samus’ arm cannon making combat more fluid and realistic. A lot of the annoyances of being locked into the old straight ahead and diagonal shots, like having to jump to aim your shots, is now gone and the game feels so much nicer to play. While I can see this becoming a fundamental part of a future 2D Metroid game, the melee counter is a more divisive feature. Inspired by some of the moves in Other M, the melee counter adds a physical strike you can pull off against enemies where you can stun them if pulled off at the right time. To balance this, they’ve had to make enemies a lot more aggressive, so unlike in other Metroid games you can’t run down a corridor shooting blindly. As soon as you enter their range of vision enemies now charge at you, but will flash when they do, allowing you to pull off a melee counter so you can stop them in their tracks and kill them. This makes the game a much slower experience and really ramps up the time you spend in one area. It does a really good job of heightening the tension of combat and building the feeling of being alone and isolated on a hostile planet, but it becomes frustrating when backtracking as you’re battling against all of these weak enemies when you want to just whizz past them. It does however make a really big difference in boss battles, as pulling off a counter against them initiates a stylistic counter attack which does massive damage.

In order to take on these hostile creatures you’ll need a vast array of weaponry, and Samus Returns expands on what was available in the original, bringing items across from other games. While you have returning items like the Varia Suit, Ice Beam and Spider Ball; the Grapple Beam, Power Bomb and Super Missiles have been brought over from Super Metroid and are now built into how you traverse the world and battle against the Metroids. The Grapple Beam functions mostly how it always does and enables you to swing across large gaps, but it can now pull you towards objects as well as move and destroy special blocks that stop you from accessing certain areas. Detonating a Power Bomb, when combined with the Spider Ball, now allows you to do something akin to the Shinespark technique as the explosion sends you flying across the stage into hidden areas. There’s no change to Super Missiles, but you will be using them frequently in battle. As well as these retroactively introduced weapons, Samus now has four new abilities she gains during the game. Called Aeion abilities, they give you unique options in your arsenal that have never been seen before. The Aeion abilities aren’t radical changes to the Metroid formula, but they do add something different to the gameplay, even if one of those replaces a franchise staple item.

The Scan Pulse reveals a portion of the map around you and highlights any blocks in the environment that can be broken with a weapon to open up a hidden passage. As these usually conceal items and upgrades, this is a huge quality of life improvement to achieving that 100% item collection rate, as you now don’t have to morph ball bomb each entire room to find a hidden item.

Lastly we have Phase Drift, which replaces the Speed Booster from some of the other games in the series. Rather than speeding you up, Phase Drift slows down time, allowing you to dodge enemy attacks and run over crumbling platforms. It’s a lot more situational than the Lightning Armour and Beam Burst, but it still comes in useful. Playing all of this on the 3DS means a massive jump up from the Game Boy original. The latter, with its pitiful resolution, monochrome pixel graphics and no map or other quality of life features, is a painful experience in this modern era, but Samus Returns remedies that with an atmospheric 2.5D style, functional menus and the best map in a 2D Metroid game.

While it’s not the best-looking game you’ll ever see, the visuals look extremely good for what the 3DS can produce, with 3D models interacting on a 2Dplane. The attention to detail that has been given to the environments is incredible, with rooms layered in such a way that they give the illusion that you’re in a 3D space. This shows that Mercury Steam really has a grasp on the handheld’s 3D effect, producing one of the most fleshed out representations of a Metroid world since the Prime Trilogy. And it doesn’t just look good but it sounds good too, with a soundtrack of rearranged classic Metroid tunes and newly composed tracks by Daisuke Matsuoka. Kenji Yamamoto and Minako Hamano return as music director and sound coordinator, so fans of the franchise’s music shouldn’t be worried – in fact one of the new tracks, Chozo Laboratory, has become one of my new favourites.

While the action plays out on the top screen, the bottom screen is used for the menus and map, which now shows the locations of any hidden items and upgrades and allows you to use pins to mark interesting locations. This means if you’ve come across an upgrade that you can’t access yet due to not having the correct weapon you can place a coloured marker that reminds you of what you need so when you get that weapon you can come back and collect the upgrade.  And looking at the map itself the world has undergone a complete redesign, making the game a lot longer but cutting back on backtracking – something that is frequently complained about in Metroid games. Each area is a little bit different from the last, but they don’t fall into different categories like “lava area” or “ice area”, so you feel like you are exploring a connected series of underground passages, despite them being separated by elevators.

If you’re an amiibo collector, Samus Returns offers amiibo functionality, with the squishy Metroid amiibo unlocking an additional hard mode in which you play with the Fusion suit from Metroid Fusion, while the Metroid series Samus, Smash Bros. series Samus, and Samsh Bros. series Zero Suit Samus all unlock bonus in-game items and media galleries, so you can browse the art and music of the game when you’ve finished it.

Metroid: Samus Returns is one fine remaster of a Game Boy classic, taking the story of Samus and her battle against the Metroids but presenting it with modern graphics and gameplay, giving the 2D games much needed quality of life improvements with the likes of free-aiming and the improved map screen; and new combat options with melee counters and the Aeion abilities. It’s the game that fans of the series have been calling out for for years, and after the missteps of Other M and Federation Force, this feels like a moment of rebirth for the franchise.

The game features unlockable bonus artwork telling the tale of the ancient Chozo that once lived on SR388 and the origin of the Metroids. You can also unlock bonus art gallieries and a sound test mode by scanning amiibo figures.

The limited Legacy Edition of the game comes with a selected soundtrack CD featuring music from several games in the franchise, a 3DS eShop download code for the original Metroid II: Return of Samus, an artbook, a gold pin badge featuring the series’ signature ‘S’ screw attack logo, a Morph Ball keyring and a steelbook case for the game fashioned as a replica of the Metroid II Game Boy cartridge.