As the Wii U begins to pick up pace in its software library, players are clamouring for games that haven’t seen a release for some time. While F-Zero and Star Fox are the usual mentions, not far behind them is Metroid. With the franchise’s last release being in 2010 with Other M, some fans feel it’s high time the hunter got her hands on some cool bounty.

Looking for where a new entry to the series could appear, the most obvious hints come from Metroid Prime 3: Corruption. In the final third of the game, players stumbled across a Space Pirate monitor that read “Metroid project ‘Dread’ is nearing the final stages of completion.” The message alludes to the long-rumoured Metroid Dread, which first appeared in 2005 claiming to be a 2D DS sequel to Metroid Fusion. Fans waited expectantly for a couple of years, but with no firm information or reveal it seemed that it had been shelved. The message in Prime 3 renewed fans hopes a little, but the game has still not appeared, despite rumours that long-time series director Yoshio Sakamoto had written a script for the game. It does however bring more speculation to the rumoured title’s position in the storyline. If Dread was nearing completion, then it could be set at any point either between Prime 3 and Super Metroid, or after Fusion (Other M directly follows Super, while Fusion is also said to directly follow Other M). From what we have, all we can guess is that it will feature Space Pirates and some form of scary, hyped up Metroid that’s perhaps akin to Metroid Prime. That’s if it ever appears. 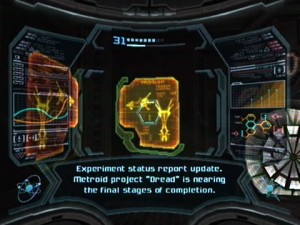 The Metroid Dread message, as shown in Metroid Prime 3.

The more likely candidate is taken from Metroid Prime 3’s hidden ending. If you achieve a 100% completion rate, you’ll be treated to a cutscene that shows a ship chasing after Samus as she leaves the former Chozo world of Elysia. While everything about the ship is a mystery, fans have speculated about the pilot and the possible implications for another entry in the series. The ship looks similar to the one that is piloted by Sylux in Metroid Prime Hunters, which gave rise to theories that there could be a Hunters sequel on the way; or due to its similarities to Samus’ ship, Dark Samus could have survived yet again. The latter is the most unlikely theory as the Prime saga seems to have been buried now, but a second Hunters game is definitely not out of the question, as both the DS title and Prime 3 introduced a variety of new alien species into the Metroid universe. One thing is for sure though; the ending allows a possible re-entry point for Retro Studios if Nintendo feel they are once again up to the task of revolutionising the series.

Out With the Dread, In With the Fusion

Forgetting Dread for the moment, let’s consider an original sequel to Fusion. Looking at events in both the GBA title and Other M, we’re seeing friction in the story with the Galactic Federation, who are illegally performing genetic experimentation on a variety of creatures, including Metroids. In the eye of the player, this makes the Federation no better than the Space Pirates in the quest for the ultimate energy source. So should we consider the Galactic Federation appearing as true antagonists? This would be a great thing to explore, considering the love-hate relationship Samus already has with the Federation. It would give a chance to re-establish Samus’ strong character, as she challenges the decisions of her former commanders as a revolutionary figure. It’s a story that would serve the Wii U well, giving scope for huge glittering future cities and grimy military bases. Retro Studios would find a huge hit with their Prime style here. 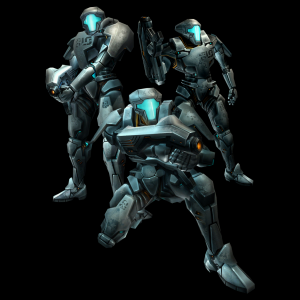 Will the Galactic Federation feature in future games as antagonists?

And that Prime style could also be renewed in the form of HD remakes. Perhaps not with another re-release of the main Prime trilogy (although that would look stunning in HD), but a console appearance for the series’ sole DS adventure: Metroid Prime Hunters. Hunters was a game with a scope that was greater than the little handheld could handle. As a title that wanted to be a first-person shooter rather than a first-person adventure, the control schemes were very difficult to get to grips with, primarily due to the system’s small form factor. Long play sessions resulted in cramp, frustration and often loss of desire to see the game to its end. The Wii U could change all of this with the Gamepad, which has more than enough inputs to cope with whatever the cackling developers want to throw at it. Dual-analogue with touchscreen map and weapon select? Yes please! There’s also the option to enable both Wii remote and Pro Controller support, which has the potential to bring in gamers familiar with not just the Wii versions of the Prime trilogy, but those enjoying FPS titles on other systems. With this latter group, a refined version of the online mode is pretty much essential; which seems to be the main part of a FPS these days. Hunters was one of few games where the single player and online modes felt equally balanced in terms of length, as the focus of Metroid has, and hopefully always will be, the single player experience. An HD Hunters then, would offer a solid action shooter experience that as a platform, the Wii U is currently lacking. 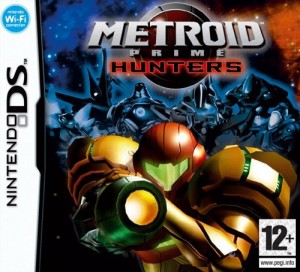 An HD remake of Hunters would be welcome.

Remakes are one way for Nintendo to secure the series’ future for some time to come, while avoiding the perhaps certain retirement of Samus. While the series has almost been around for twenty years, Samus as a human character is limited in her number of appearances in a constrained timeline, unlike the ageless Mario or the forever-reborn Link and Zelda. So what could continue the series when Samus finally retires from her bounty hunting duties?

While there are surely numerous things Nintendo could do, the only correct answer to continuing the series in the same style is to focus on different characters. One option would be to follow down a path that is commonly used by media: the protagonist’s child. This theme is a “get-out-of-jail free card” that allows a story to continue when the main character has no more room for development, or has defeated all of their primary antagonists. Would it be beneficial to Metroid as a series? Yes, if it promoted new gameplay features that were not possible with Samus and a deep, well-constructed storyline that furthered the scope of the current Metroid cannon. Such things could also be achieved by spin-off games set in-between the main titles. There’s huge potential for the Galactic Federation to feature prominently as there is so much more to be revealed, such as previous conflicts, the battle with the Space Pirates, and the threat of the Federation’s own bio-engineering programmes.

These ideas don’t even have to be games: the manga adaptations have proved popular among fans and already add some substantial depth to Samus’ story, and Other M’s cutscenes played out as an animated film. While adaptations of games to other media have been hit-and-miss, could the time be right for Metroid to take to an alternate stage? Perhaps, but history may take this down the route of novels or manga rather than animation. Many fans were unhappy with the cutscenes and story in Other M, so unless both a good scriptwriter and animation studio were available, it’s doubtful the series would go down this route. 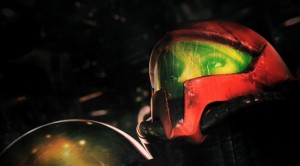 Looking to the future: Possibilities in games and other media.

Nevertheless, the future of Metroid as a series looks brighter than it first appears. Both the Wii U and 3DS are systems that offer a good development platform in terms of gameplay, and a Metroid title on either system will bolster the software library. Remakes offer the possibility of tiding over fans during a longer hiatus and spinoffs offer scope for the series to continue long after Samus hangs up her Varia Suit. Who knows? The next mission could be just beyond the nearest planet, but until it arrives let’s just chill in space with our favourite bounty hunter: Samus Aran.