In summer 2013, I had the pleasure of spending a week in Japan’s capital, where I got to see some of the key attractions that the city has to offer. The final day was a roundabout tour of three locations: Shibuya, Akiba and Marunouchi. Having covered all of Akiba already in part six, I’ll be going over Shibuya and Marunouchi.

The main exit of Shibuya station leads out onto two major sightseeing points. The first is the statue of Hachiko, the faithful dog who waited for its master on that same spot after its master died. Getting a clear shot of the statue was difficult, as it lived up to its name as a meeting place having a good number of people gathered around it. The second is the world’s busiest pedestrian crossing just outside the station. There are two routes you can take across here, the left road takes you to 109, the right to 109 Men’s and Tower Records, and going up the left cut-off just slightly up the right road leads you to the NHK buildings, the National Gymnasium and back to Yoyogi Park. 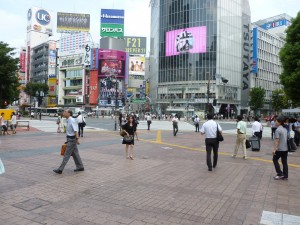 109 was my first destination – the fashion mecca is often tipped as a place to see not just for the girls but for everyone. It was originally opened in 1979 as a department store targeting women in their 30s, but in recent times it’s become popular with younger women.

There is a large selection of different stores and fashion brands spread over eight floors and two basement levels. The stores are generally arranged in a square and are relatively small in size, so expect frequent calls of “Irasshaimase!” (“Welcome!”) as you walk past. There’s all kind of different styles for different ages selling practically every kind of wearable item. 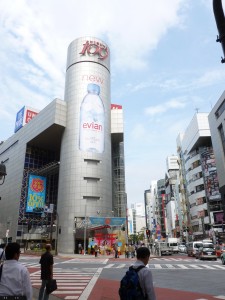 109Men’s, based in the other road from the station, is very similar, although smaller than the women’s. While 109 is generally well-lit, 109Men’s takes a more masculine feel and has darker, more grungy lighting. The stores are the same quality as the women’s though and have a generally large selection ranging from smart to casual. At the time I was there, 109Men’s was doing a promotion for the 2013 live action Gatchaman movie, and were displaying costumes outside of the main entrance.

Going further up but staying on the same side, you’ll reach Tower Records, one of the biggest physical music stores I have ever seen and a lot bigger in comparison to music stores here in the UK. Tower Records is actually an American music retail chain that has globally suffered like others of its kind due to the digital boom. Although stores in London, Glasgow and Birmingham stores used to exist, they pulled out of the UK market in 2006, the same year the company’s US assets were liquidated. Japan remains one of the company’s leading territories due to the continued public support for physical products over digital.

There are many floors to explore here, each dedicated to particular genres of music. It’s quite nice just to take a full look round to see what music they are actually selling. There was certainly a lot more international fare than I expected, gathering different genres of music from all over the world in their particular sections, which is something you certainly don’t see here in the UK. The most we seem to get is a ‘world’ music section which seems to feature predominantly more folk music from Latin America, Eastern Europe and Africa. Digital stores have remedied this, with a lot of Japanese music now being available on iTunes, but online physical retail is limited to a select few publishers.

If you’re visiting to purchase some Japanese CDs however, you’re inevitably spoilt for choice. Every major genre is accounted for, from general rock and pop, visual kei, idol music and a sizeable anison section, with items from the more popular anime such as K-On!, Ghost in the Shell, Haruhi and others still available. You can also listen to tracks on the store’s CD players if something intrigues you and you’re not sure if you want to make the purchase. CDs that are available to listen to are labelled on the shelf with numbers: select the specific one on the CD player, stick some headphones on and make some new discoveries! During my visit I acquired fifteen items coming to over 35,000 yen, so if you’re a J-music fan make sure you save plenty – you’re going to be increasing your collection by a long way. 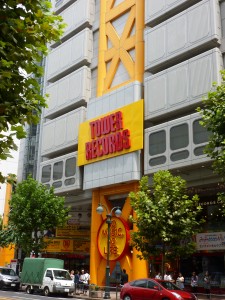 Exiting Tower Records, you have quite a lot more to explore as Shibuya is a large section of Tokyo. It’s particularly strong for small sized music venues, which have seen a range of popular acts, such as Perfume, perform in the area. Sadly, I was tight on time so I headed back to the hotel to drop my CDs off, then went on to Akihabara for the maid café experience that was covered in the previous part of the feature, then went on to Marunouchi.

Marunouchi is one of the key business areas of the city, quite similar to London’s business sector, full of tall skyscrapers and high rise buildings. In the middle of the thrusting steel is Tokyo Station, which is refreshingly different to its surroundings, being a red brick European style structure, which did give off a very familiar feel. Navigating through the confusing arrangement of station roadway will put you about ten minutes from the Imperial Palace gardens, which was my ultimate destination. However after getting as far as the outer perimeter of the palace grounds, nature decided to play its part and unleash a fierce thunderstorm sending me scurrying off the open ground to cover back near the station. 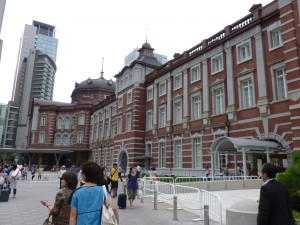 That cover was the Shin Marunouchi Building, which I decided to explore as I waited for the storm to die down. The majority of the building houses upper class shops for clothes, accessories and trinkets; not designer, but the kind of things politicians, entrepreneurs and highly paid bank managers and all of their partners would adorn themselves with. There were also a few upper class restaurants here and there; either way the place reeked of the business sector of the city. 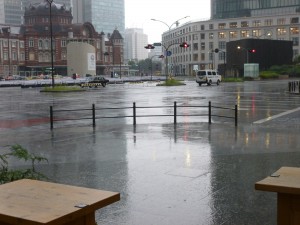 And the rain came down

Thankfully, the weather died down within fifteen to twenty minutes, and I had just enough time to head back down to the Imperial Palaces grounds to get a shot of the statue of Kusunoki Masashige, a 14th Century samurai. He is mostly remembered for his involvement in attempting to restore Emperor Go-Daigo to power, and his loyalty to the Emperor as the ideal of all samurai loyalty. 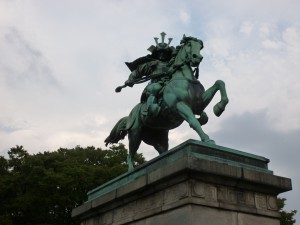 Walking back up to the station I passed by the Tokyo International Forum. This is another exhibition centre similar to Tokyo Big Sight, and built around the same time. Being in the business sector, its events are usually more prestigious than those held at Tokyo Big Sight. Both however are designated venues for the 2020 Olympics. 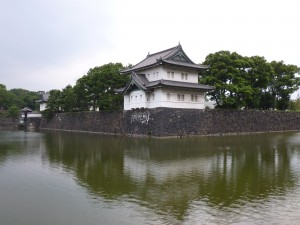 The walls of the Imperial Palace grounds

The last night of the trip saw our tour guide introduce us to a place in Shinjuku that would make the girls from K-On! scream with delight: Sweets Paradise, a cake buffet. There were a large variety of sponge cakes available, all of different flavours and with different levels of cream. Sadly, I have to confess it was all too much for me. Yes, the love of cake actually got the better of me, as I ended up eating too much and having to face feeling ill on the long flights home. And when you’re not comfortable with flying in the first place, it doesn’t make for a great experience. However, looking back I don’t regret all that cake one bit. It was sweet, tasty and worth every yen. Do be warned though, everything was a lot sweeter than what you generally get in your sponge cakes that are available in your local supermarket – so it may be a little too much if you don’t have the stomach for gallons of sickly sweet food. If you do go in and find nothing to your liking, there’s also salad and cold pasta available, but the Japanese generally don’t do pasta-based and Italian dishes very well. 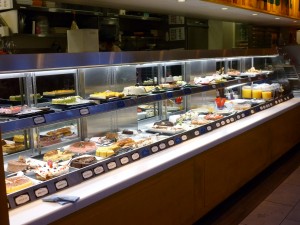 As most of us know too well, a week passes by in a flash, and all too soon it was time to return home. A single week is definitely not enough time to see everything Tokyo has to offer, so making your stay as long as possible is best if that’s what you’re aiming for. Of course leaving brings all the necessary travel and such, and before I close everything up, here’s a few tips before you head back home. A lot of this is common sense but it helps to remind ourselves once in a while.

1. Eat well beforehand, but not so much you make yourself feel ill. It makes the flights even more bothersome than they already are, and it’s a pain turning down the awful plane food when the flight attendants force it on you.

2. Try to sleep well before your flight and give yourself enough time to rest up. Flying on four hours sleep when you can’t sleep on a plane is very rough.

3. Pack at the beginning of your final day, or at least have everything at hand to quickly put away on the night. This gives you more time for sleeping.

4. Don’t miss any of your purchases, important items or valuables. The hotel is very unlikely to contact you if you leave something behind.

5. However, if you have bought anything that either isn’t allowed in your home country or is suspicious, leave it at the hotel. It wouldn’t surprise me if someone did get caught out on this.

Summary: Best Week of Your Life

And that subheading says it all really. Having not travelled much, my comparisons are lacking, but Tokyo was most certainly the best city I have ever visited. Forget your grimy UK with perpetual rain; this is a mish-mash of modern society that remembers the traditional. There’s both volume and variety in things to do and see, and with excellent train connections plenty of scope to go further afield. Of course, Tokyo isn’t for everyone. If you hate crowds and the bustle of city life and would much prefer relaxing on a beach; you aren’t going to enjoy it here. However, if you have an eagerness to explore new places, experience foreign culture and aren’t afraid of getting lost, you will have an absolute blast. The anime and manga side of things is obviously a huge draw, but it’s not all what Tokyo and Japan are about. It’s food, fashion, music, religion, politics, business and everyday life. No matter your reason for visiting, Tokyo will give you some of the best times and experiences of your life.