In summer 2013, I had the pleasure of spending a week in Japan’s capital, where I got to see some of the key attractions that the city has to offer. The sixth part of the feature brings us to the ‘Anime Day’ with a look at J.C. Staff and a few trips around Akihabara.

J.C. Staff is a studio that most anime fans should know, having produced shows that have either been named as classics, or have been immensely popular; such as Revolutionary Girl Utena, Azumanga Daioh, A Certain Magical Index/Scientific Railgun, and Little Busters.

On the Japan Journeys Manga Tour, the usual destination for the animation studio visit is Toei, however at the time when we were there they were moving offices, so it was changed to J.C. Staff. While Toei would have been great to see, particularly for Precure (I’m a bit of a fan), J.C. Staff was an excellent studio to visit. All of the staff seemed very welcoming and they were happy to show us around, even as the employees worked. That was perhaps the most fascinating part, seeing the actual employees sitting there crafting shows that we’d see in a couple of months. This was particularly true in the case of Little Busters Refrain. Obviously I can’t reveal much more, as they were understandably very protective over their working practices and what they were working on. It’s simply something that has to be experienced for yourself, and this was one of the main reasons why I chose to do the Japan Journeys tour – it’s such a unique opportunity. Nevertheless, I feel a stronger affinity for their shows now and I’ll always be wishing them the best.

From J.C. Staff, the next stop was Akihabara, Tokyo’s main geek hangout. It’s a place that I would revisit a couple of times, so I’m covering the entirety of Akihabara here, rather than following the established time-based approach.

For the main section of Akihabara, you want to take the Electric Town exit of the station; the other exits puts you on the right hand edge, while Electric Town puts you right in the entre. You’ll emerge in a large square, with some key attractions just on your right: the home of the infamous idol group AKB48, and the Gundam Café.

Being a fan of AKB48 and idol music in general, I made a start with the AKB48 café and shop. The café is of course themed, but doesn’t quite delve into maid café territory, only having the waitresses in the classic AKB uniforms. The food is quite light and standard themed café fare, offering a range of dishes that are said to be selected from the favourites of AKB’s members. I took the choice of a pork cutlet when I visited, and it was very nice – properly prepared, well cooked food. The décor inside feels quite diner-ish and simple, but the wall mounted TVs are the main focus of the action, showing a range of PVs and live stage performances. Luckily I got sat down just when Heavy Rotation came on, and it’s a magical feeling having one of your favourite songs to listen and watch while waiting for your order.

The shop next door offers a range of merchandise, CDs and DVDs adorned with AKB goodness. They’re about the same price as they would be online, plus they have good stock of older items that may be harder to get.

The main AKB48 theatre is right next door to the café. If you want to get to a show while you’re in Japan, there’s an application process that can be found on the English version of the AKB48 website. Note that they only allocate a maximum of 6 seats for foreigners at any show, and you have to apply a month in advance. 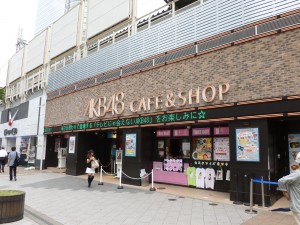 From the central square, head out onto Chuo Dōri. Along here you’ll find a range of stores, particularly many branches of the electronics chain Sofmap; and arcades, such as the giant Club Sega directly opposite the exit to the station’s square. If you cross the road and continue up to the right you’ll reach Akihabara’s branch of Animate, while if you go left and take the first left turn you’ll get to Gamers, of Lucky Star fame. You tend to find that buildings have many businesses in them or a single business over a multitude of floors. 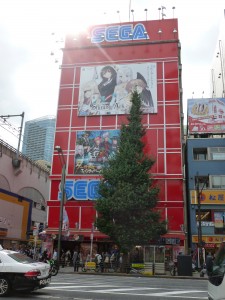 One of the many Sega arcades

If you go through the small road to the side of the Club Sega that you see as you exit the station’s square, you’ll get into this tightly packed road that has a lot of different stores and just like the main road, will typically carry hordes of maids and cute cosplaying girls. Some of them will be more than happy to hand out flyers for their establishment, but I noticed that some weren’t giving me any flyers even when I’d caught their eye – the only time I came into contact the reported mistrust with foreigners.

In this part of town, there’s a good number of focal points, but the main ones have to be Kotobukiya and Super Potato. Kotobukiya is the unmissable standard green building (not the aqua coloured Tsukumo building) and is one of the major figure distributors and creators. You’ll be able to pick up a lot of the common stuff here, such as the Figma ranges and so on, but a lot of the stuff behind the glass cabinets will be the pre-order only stuff, which usually sells out long before the release date.

If you’re into Namco Bandai’s Tales of series of JRPGs, you’ll be pleased to find the Tales of shop on one of the upper floors, which carries a good assortment of merchandise. 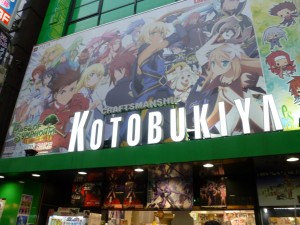 Mentioning games, you don’t want to pass up the chance to visit Super Potato. While established in Osaka’s Akiba equivalent of Den Den Town, Super Potato’s Akihabara branch has all the retro games you would ever need. The store has three floors, two selling games and merchandise, with the top floor being a retro arcade (although sadly the majority of the arcade is running on emulators and not the original cabinets). It’s just a treasure trove of retro goodness, with a huge variety of games from Nintendo, Sega, PlayStation and other platforms. So no matter what side of the retro platform war you bat for (or if you’re an all-platform type of person), there’s plenty that will catch your eye. 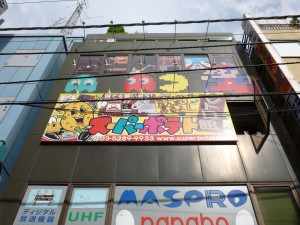 The front of Super Potato

From here there are loads of places to explore in Akiba, selling all kinds of items, whether safe for work or not. As such I could sit here all day typing places to go at you, but that’s not the fun bit. The fun bit is getting out there and exploring it for yourself, and I will guarantee you will have a gigantic smile on your face the entire time.

So with that, let’s skip forward around eighteen hours or so, and get down to the maid café experience.

You could call visiting a maid café a rite of passage. It’s something that has to be experienced in the correct way and actually in Japan – western adaptations simply don’t cut it in comparison, just like the ramen I mentioned in part five.

As you browse through Akiba, you’ll encounter a lot of maids – I came away with a lot of leaflets for a variety of types of cafés, from the big chains to the smaller, niche cafés. Simply pick one that fits your tastes and head to it. The Japanese address system is confusing, especially when you’re consumed by a mass of tall buildings, so thankfully a lot of leaflets will provide a small map that points you to where it is. Alternatively you can Google Map it using the hotel Wi-Fi.

The café I went to was a branch of MaiDreamin’, one of the biggest maid café chains. After stepping inside, one of the maids will get you seated, before returning and performing the contract part of the affair, as you become master or mistress for your time at the café. They’ll then explain the different options to you – as you can get the full package (meal, drink, entertainment and photo) or a mixture of the four, at different rates and amounts of time you can spend at the café for a set price. It’s not particularly that expensive (the full experience for an hour cost me around 1,300 yen), and the amount of time you get for the price felt just right – it wasn’t so short that you didn’t feel satisfied, but not too long that you got bored. 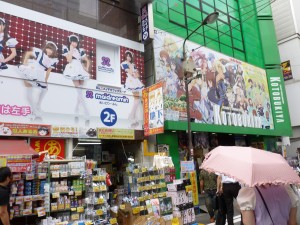 A branch of MaiDreamin’, next to Kotobukiya

Meals are standard maid café fare, and they serve a variety of different teas, as well as soft drinks. Being my first time at a maid café, it was impossible not to try the legendary omurice (rice omelette), which was a lot tastier than I thought it would have been. It was certainly satisfying enough for lunch.

In terms of entertainment, at certain intervals the maids will do a singing and dancing routine, with audience participation. When you get the gist of it it’s really fun to join in, and you can tell who the regulars are – there were a few Japanese guys that were really into it.

The only negative is that unlike in the UK where smoking in public places is regulated, Japan doesn’t have such regulation in that disallowing smoking is simply urged and not mandated, so it’s up to the owner of the establishment to specify the smoking rules. In the branch I was at, although there was a designated smoking area down a short side corridor, the smoke still wafted into the main room. If you’re a non-smoker or anti-smoking individual it can be a little off-putting, but it doesn’t impact the overall experience.

Near the end of your time, you’ll get the chance to have a photo taken with one of the maids if you added that into your bill, and you can ask for a particular maid that you like, or leave it up to them. I wasn’t particularly bothered, so I got the maid that was serving me at the time, a girl called Alice, to have the picture done with. She was actually quite nice and was generally conversational as she spoke a good bit of English. With being quite young, all of the staff seemed to know even just a little English, which is a good move if you’re employing someone in an area that a lot of tourists visit.

At the end after paying and leaving I was more than satisfied with the whole experience. If you’re in Akihabara it’s definitely something that you have to try. If maids don’t tickle your fancy, there’s also butlers, cats and various other things to satisfy your time with; so there really is something for everyone.

With plenty to buy and a lot to do Akiba is going to take a huge bite out of your wallet, so don’t forget to save for elsewhere as well, as there’s still a lot of Tokyo to explore. Next up its Shibuya and Marunouchi.