Some anime are slight distractions, while others require investment. With these latter series, it’s always questioned if it is worth sticking around for a slightly longer show that perhaps doesn’t fully grab your attention at the beginning. Sometimes you are rewarded, other times you’re disappointed.

Nobunaga the Fool, thankfully, is an anime that rewards over the long term despite a lower key start, and its first appearances are actually quite deceptive when you consider the final destination and how the choices and fates of our two central leads intertwine. 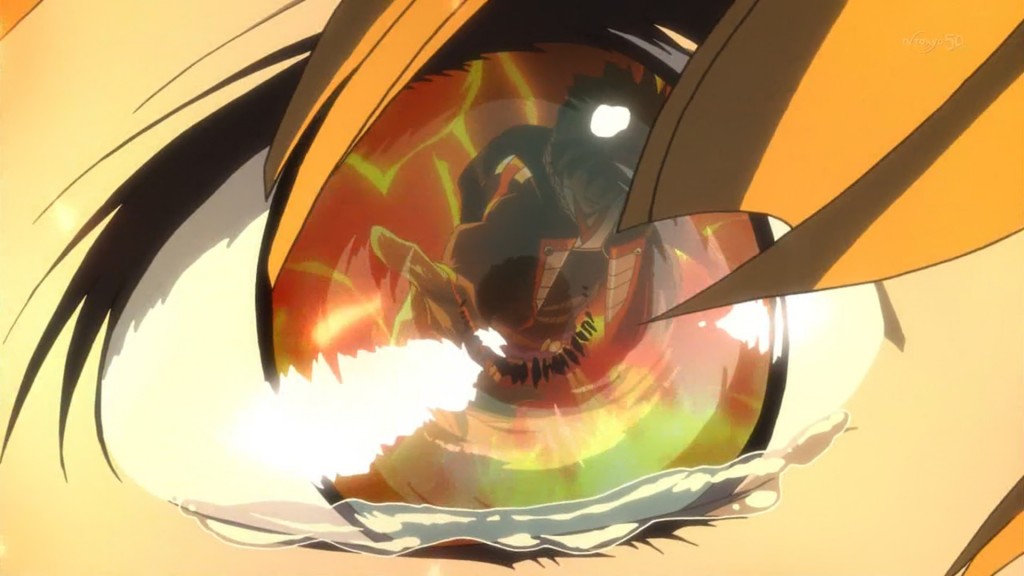 This tale takes place in a fantasy world that places medieval Europe and feudal Japan on different planets, bridged by the mythical Ladder of Heaven. On the Star of the West, young Jeanne Kaguya d’Arc (a representation of Joan of Arc) awakes after a savage dream – herself, wrapped in flames being burned at the stake; and a Japanese warlord, wrapped in flames as his city burns. The two images intertwine revealing a young Japanese man that Jeanne identifies as the Saviour King.

That man is Oda Nobunaga, the unruly son of the Oda clan on the Star of the East who much prefers hunting than seeing to matters of court. The young lad and his friends Akechi Mitsuhide and Toyotomi Hideyoshi have a dream themselves, although this one is more wishful than prophetic: to unite Heaven and Earth, forging the two stars into one.

It isn’t going to be easy though; with the Takeda attacking on one front and forces from the Star of the West striking from above; this is the Sengoku Jidai on another level. And that is why its first appearances are deceiving: Sengoku era stories have been very popular over the last couple of years, and while it is a fascinating period of history, the focus on the popular clans and warlords of the time has become quite tiresome. So it’s with a sigh we are introduced to Nobunaga in contrast to the intrigue of seeing a representation of Joan of Arc. And while these two are our main leads, they are the most poorly represented characters to invest in – Nobunaga is your typical hot-headed young guy with a thirst for glory, while Jeanne is often the pretty woman at his side; sometimes stepping into battle, but for the latter half abandoning the historical basis for the character. 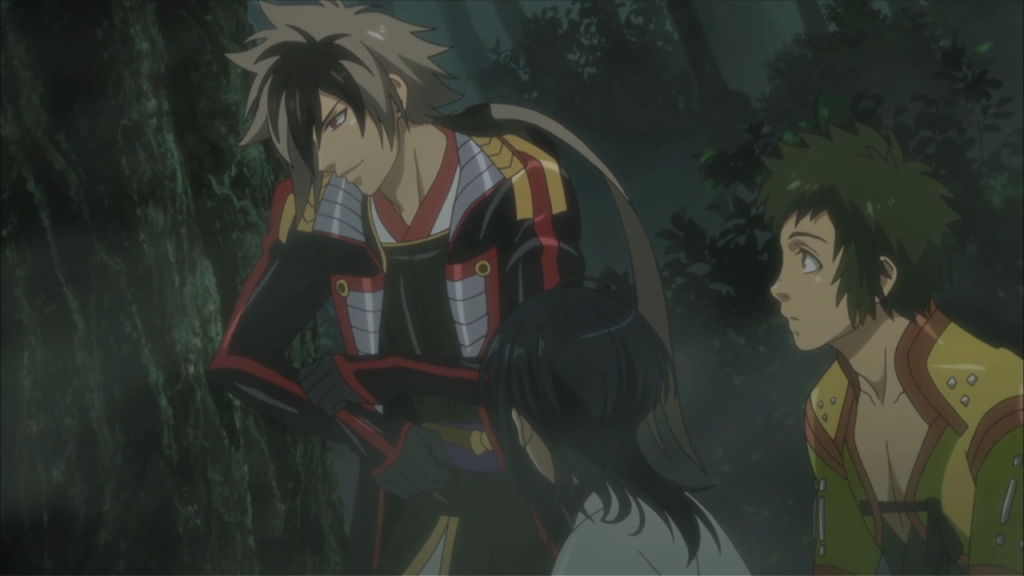 What’s more interesting is what they do with the rest of the cast, particularly from the Star of the West, and how they build upon the real and mythical world leaders that they are based upon. As the series is constructed from a Japanese perspective, the villains are the Europeans led by King Arthur, a robed figure in a mask who helms his knights of the round table. These aren’t your usual knights though, as a range of historical figures has gathered around Arthur, from the likes of Julius Caesar and Alexander the Great to Charlemagne and Hannibal. It’s an interesting concept, sticking historical characters in this fantasy tale, and while they don’t bear much resemblance in terms of character compared to their real-life counterparts, the focus is on using this band of warriors to give the Japanese cast an enemy to fight against. In that sense they work perfectly and give the series something fresh over other shows set in this time period, like Sengoku Basara.

Not to be outdone by card-based anime, there’s also the tarot card toting Leonardo Da Vinci, who acts as a bridge between the characters and the viewers as his card readings allow you to guess at what is to come. So it gets you thinking, and while this isn’t particularly a thinking anime, it adds another dimension of interacting with the story. 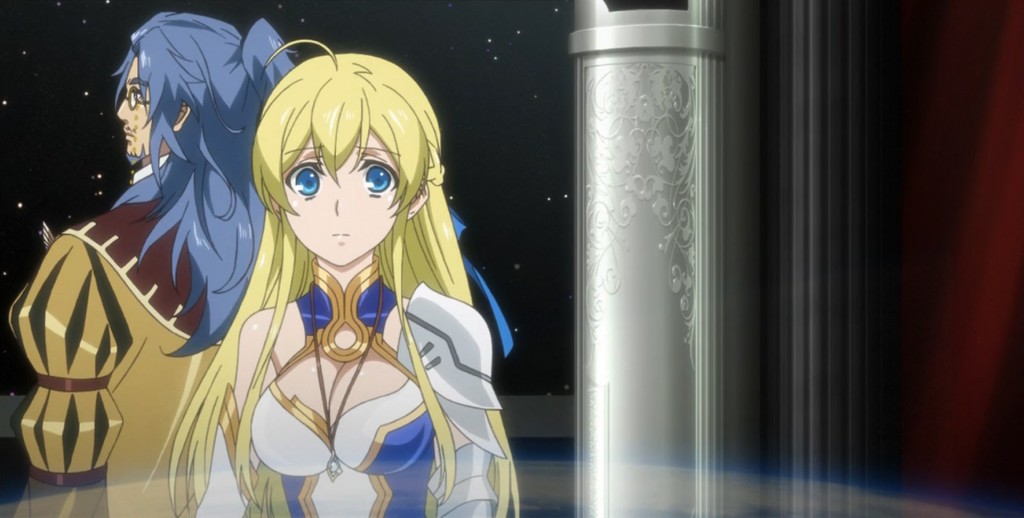 And it’s a story that contains quite a bit of fighting with the two sides battling to control both stars. This is practiced through the use of war armour, giant mechs that take inspiration from both western and Japanese culture in their designs. The western forces are glistening killing machines of steel, sleek and beautiful, while the Japanese forces are a lot more rustic with traditional coned headwear and armour. The main characters get special units of their own, which are more typical for mecha but fashioned more in their European in-story origins; although this is still some very good design work by the folks at Satelight.

The action itself is fast-paced and exciting, with a lot of CG being added into the mix for the mechs as the camera moves around the fight, creating a flowing, kinetic style to the animation. This is added to by the insane effects brought on by the use of the Regalia – magical pendants that grant their wielders special powers like swaddling their weapon in fire or summoning lightning. It looks cool, but at times it feels like the animation struggles with everything going on and drops the frame rate creating a slight judder. It’s not enough to spoil the show by any means, but it is noticeable.

While the action sequences do take up a considerable amount of budget, there’s a balance struck between them and the outrageous story, and within that you can feel its origins as a stage production. Satelight understands that mech battles are cool, but they don’t let it overbear on the weighting of story progression and development. 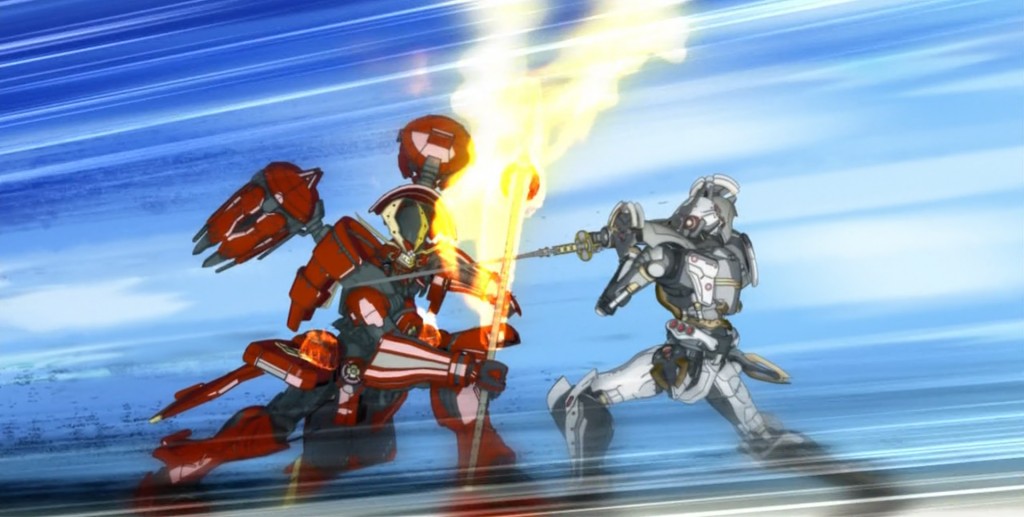 That said, not all is perfect in certain areas, as some characters are neglected in the second half, going as far as making us wonder why one was even saved from the brink of death. The Knights of the Round Table as a whole are pitifully underused and mostly serve as Arthur’s pawns to sacrifice rather than the conquering individuals of their namesakes. Caesar steals the majority of the action while others only get screen time for specific sequences. The plot itself with its mishmash of cultures and ideas can be hard to grasp at times, and the animation quality is rather typical for this kind of show.

While it starts off as a slow burner, Nobunaga the Fool eventually comes into its own as an enjoyable fantasy anime mixing the cultures of east and west in political intrigue, intense battles and a quest to unite separate worlds. The story may be a little outrageous for some, but if you can get into it and put in that investment then there’s plenty to reward you as it pulls you towards a very satisfying conclusion.